Do you love classical dramas told in music that will live through the ages? The allure of spinning white boots atop a white ice pediment? The Disney-like magic of fairytale romance told through the art of body and design? This is historical escapism at its best. For 8 shows only, on our own State Theatre stage, witness an ice-skating adaptation of one of the most famous and romantic ballets ever created, the Russian tale of the Prince who fell in love with a swan,1875’s Swan Lake. It’s a modern nod to a classic brought to you by the top ice storytelling touring company in the world.

The deeply passionate strains of creator-composer Tchaikovsky ring out through the theatre, beneath which a world of colour and pageantry parades in Lunchbox Theatrical’s Swan Lake On Ice. Successful touring the world over, the award-winning The Imperial Ice Stars return to Melbourne with a jaw-droppingly beautiful version which hits all the high notes creatively and in terms of technique. A standing ovation at performance end was testament to our appreciation of so much special effort. 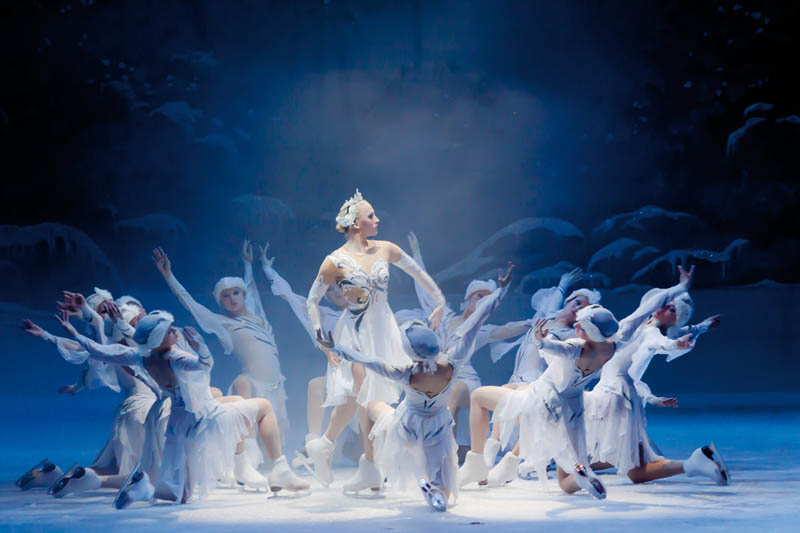 Stunningly fluid choreography by Tony Mercer makes world-class and competitive skaters’ forms liquid. Though this story was first performed as a ballet, the heavy ice boots do not weigh these skilled movers down and they dance as if in soft shoe. Elegant, seamlessly flowing moves, delicate partnering, and intricate group patterns, as well as astounding acrobatic feats, serve up moment after moment of excellence. The company’s previous four world tours (Sleeping Beauty on Ice, Swan Lake on Ice, Cinderella on Ice, Nutcracker on Ice) have earned The Imperial Ice Stars an unrivalled reputation for pushing the boundaries of ice dance and it really is exciting to see character cut through the ice every minute on stage.

There is much to like about The Imperial Ice Stars. With Eamon Murphy sets and Albina Gabueva costumes to die for, full of authenticity, colour and theatrical flair, impeccably trained skaters who possess both storytelling skill and athletic brilliance, a choreographer who leaves no scene neglected, and thrilling, chilling daredevils feats on ice-skates, this company leave nothing to chance. Their utter professionalism delivers in a way only the best can, and has a commitment to excellence that shines through every aspect of this show, from set construction, scene changes, special effects to elaborate and authentic sets dressed up with thematic and detailed costuming. Fom the smallest twirl of a corps dancer to a walk on moment for an extra, nothing is less than top quality in this presentation. Let falling snow and rings of fire transport you… 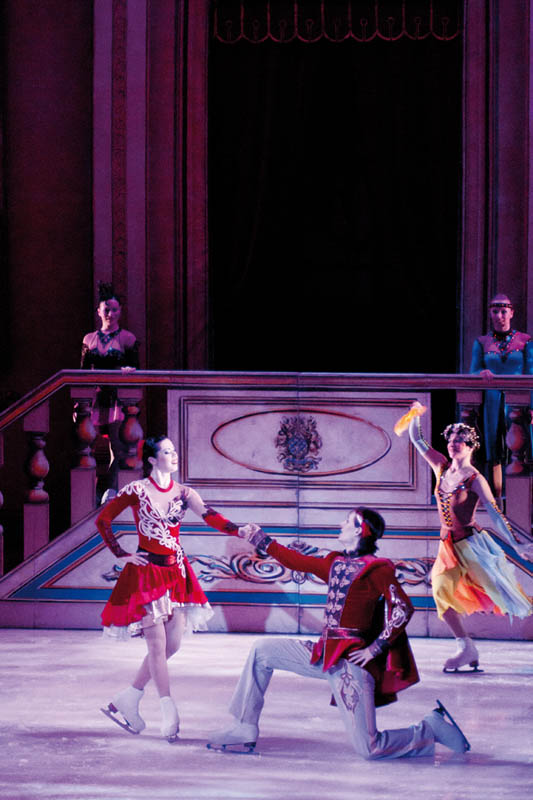 You will arrive expectant and leave enthralled, so much is offered in this performance. Technical prowess, fine skating skills, acrobatic tumbling, leaps and duets, sensitive romantic couplings, humour and punch combined with a finely tuned overarching narrative that tells all the significant moments of the fairy story across four acts. Of the marriageable Prince Siegfried’s hunting party which uncovers the swans, with maiden Odette, beside their lake. Enslaved by an evil Baron to live in bird form, these women only return to their humanity at night. This spell can only be broken by one who has never before loved declaring eternal love for Odette. Their famous love pas de deux is movingly told against a fabulous backdrop evoking this forest setting. 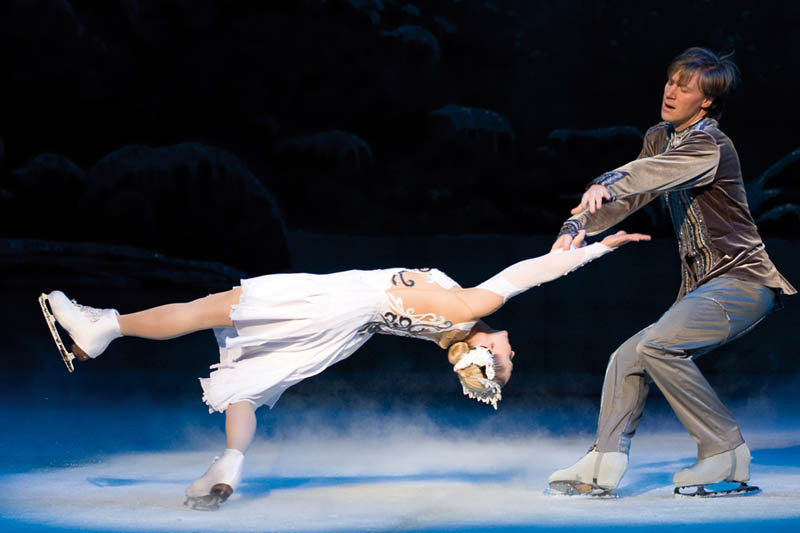 An opulent set lays the scene after interval of the palace ball, where The Queen looks to betroth her son. The Baron’s daughter, beguiling Odile, attempts Siegfried’s seduction, while we are regaled by guest performers who dance respective national dances- Spanish, Mexican, Arabian, and animated Cossack.

The two male leads are real scene stealers, projecting character, mood and story larger than life to the audience. Odette is successful as their female lead showcasing her exquisite technical mastery combined with delicate bird-like artistry that elevates the emotion and colour of her role interpretation. The entire cast are top skaters, 23 Olympic, World, European and National Championship level skaters, and their execution is flawless. You will see postures and holds in glacial setting you have never before seen such as when Siegfried balances two females, Odette and Odile, on his torso still skating. Backwards skating at pace always sets my pulse racing, as do the poses where female skaters descend upside down along their partner, or held out sideways by only one arm. Feats such as this do not steal from the rich drama of the traditional tale,and are subtly integrated. 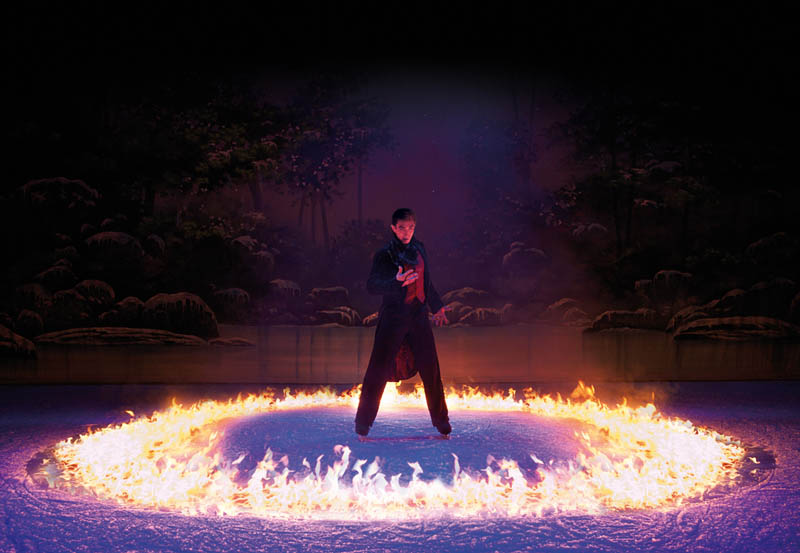 You and your guests will love every moment of this incredible production. Take your time to find little moments that mean so much to you. For me, it was the drama of traditional performance against the magnificent score combined with the rousing dynamism of the skater’s moves. There are no flat moments, it honours the spirit and tradition of dramatic live theatre told as only Russians can with a rousing company encore that involves still more acrobatic feats, loud clapping, and cheering. It’s unmissable.

Series DVDs, detailed programmes and glittering snow flake lights on sale in the foyer add a portion of this theatrical magic into your life.

Disclosure: The Plus Ones were guests of Di Rolle Publicity.

AGRIculture: The Heart of Victoria Gala with the RASV