The colossal tragedy of Roman General Mark Antony and his beloved Queen of Egypt, Cleopatra, is modernised in Bell Shakespeare’s latest gift, Antony and Cleopatra. A play contrasting personal passions against the national, the dramatic build of invading armies leads us to the terrible fall of a simple two in its ending. It’s a play both about empirical power and the complexities of human love. A classic of literature, you have to see it for its set, beautiful retro- Mod costuming, and the glittering performances of its cast.

Written in 1607 and likely performed in the new, bespoke Blackfriars theatre, it was a creation for wealthier patrons. Considered a problem play, it combines genres history, romance, tragedy and comedy, and thought a sequel to Julius Ceasar, Shakespeare’s commentary on over-weaning state or regal power. A play which resonates themes of ambiguity, betrayal, and corruption, as well as meditation on imperialism and colonisation, this work, late in his life and career, speaks about the end of the Tudor dynasty, Elizabeth’s troubled late reign, and the evils of government. 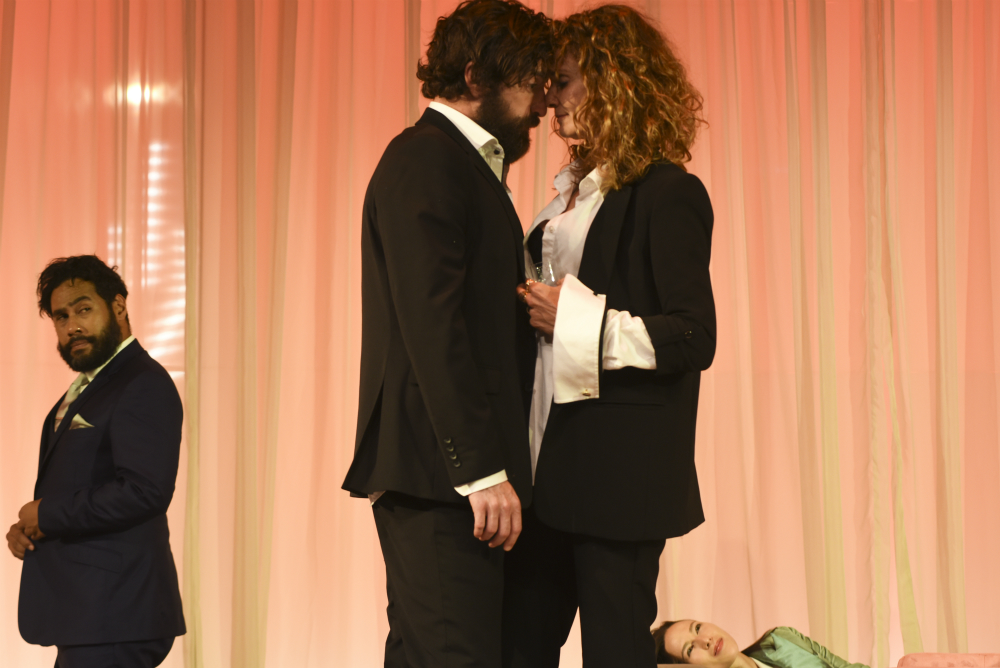 Johnny Carr as Antony and Catherine McClements as Cleopatra. Ray Chong Nee, in background, as Enobarbus, and Ursula MIlls as Octavia.

Directed by Peter Evans, this play thrills to the dark passions it contains and gets down to business directly. It transports you back to BC and the clash of titanic empires- Rome and the jewel of the East, Egypt. Geography moves dramatically from the sensual Egypt back to the austere dominion of Rome, counterpointed by the intimate amour of the title lovers, as well as by Antony’s devoted soldier Enobarbus’ love for his man. These personal travails are set against a backdrop of gigantic proportions- the battle for Empire, and scenes switch from tenderly private expressions of fidelity and love, the best of man, contrasted by the roll of a military machine in its transnational land grab. There is much of today’s international warring to think about as we watch this classical parable where time is running out.

Dates and details flash across a sheer curtained backdrop in capitalised font like memes on a Facebook feed- invasions, collapse, political changes, and rulers. Antony is of Rome, the power of the West. The lady he is sent to conquer yet becomes the ruler of his heart and passions, and he is thought corrupted by the pleasures of the East, by indolence, beauty, and the good life, also attributed to the Greeks. Embodying chivalry, he is tempted to abandon all of Rome in his pursuit of the domain assigned to women- of the body and the heart. He is made mouse in her dominion and it is amongst these various contrasts which the play’s action swings. When they are together, you will hear some of the most beautiful lines of a mature romantic love ever written by Shakespeare. 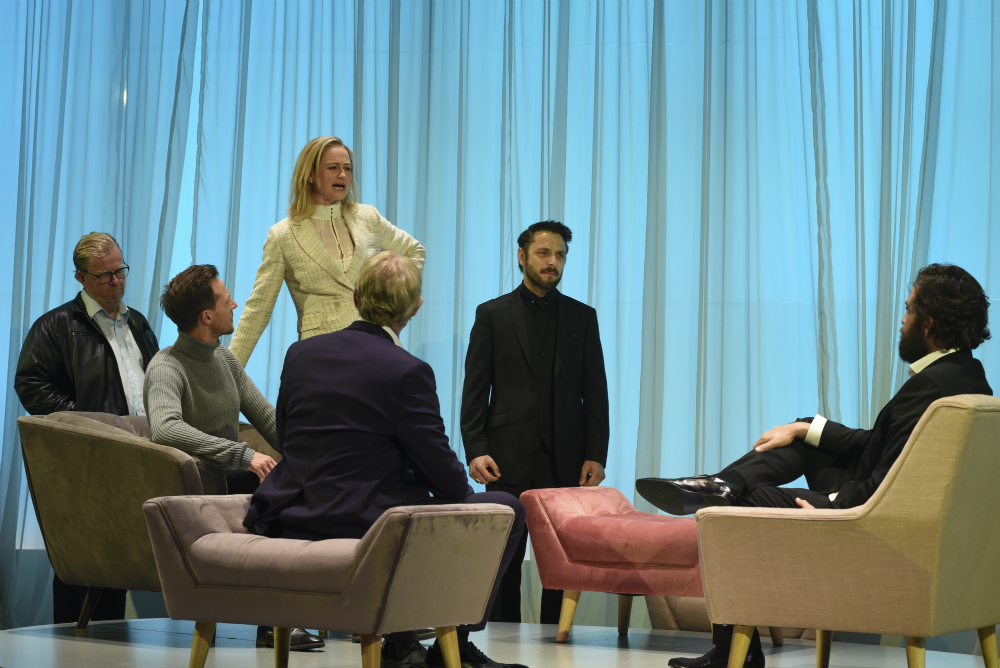 Evans, and the company, loves the language of the text, and each actor is expertly trained. This company is unique in its commitment to oratory as well as to the physicality required to deliver long speeches, a hallmark of true Shakespearean performance. It is thrilling to watch them master it, taking you through many famous lines – my salad days, eternity was in our lips and eyes, woman is a dish for the gods. You must see our national company just for this, and how they Australian-ise Shakespeare’s tongue, commenting also on its Englishness, for local audiences. Steve Rodgers as Agrippa embodies this translational shift, typically mistakenly over-formalised, into the local, also bringing terrific gravitas.

Anna Cordingley’s simple ovoid set in shell and salmon pink looks like any boardroom of our capital cities, or a pastiched 1960s domestic interior of the lush modern Australian home. At times, you could have been at an Australian get together in the house of the Queen, a family reunion, BBQ, or birthday celebration, so laidback was the delivery. It is this very transposition of Shakespeare’s capitals into our equivalences which this company excel with. This small set holds the entire cast, and a delicate slow-motion balletic choreography sees them rotate like the shadowy chorus of traditional Greek theatre. Mimetic and enchanting, this foretells a swelling undercurrent of doom, enhanced by Max Lyandvert’s sound design. Watch for the climatic rock dance section where the whole stage contemplates a self-chosen afterlife. 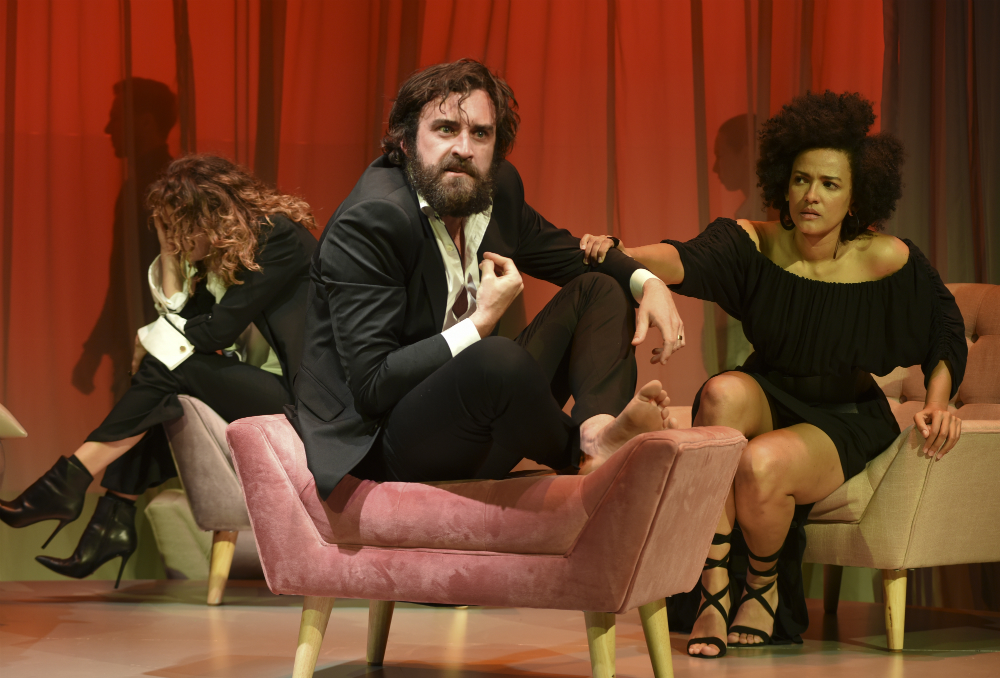 This play has big characters. Think Hilary Clinton and Trump. Barack Obama as Antony and his Michelle as the woman he gave up an empire for. Theirs was a grand amour. Renowned Australian actress Catherine McClements gives us a 21st century diva, masterfully pulling focus and dominating the stage every moment she speaks and the language falls from her throat as precious wine. Corporately attired, she strides in formal black pants, tailored shirts,  adorned with rustic jewellry which point to the ancient world’s riches which she possesses. Under her rolling curls, her cat-like grace and avid gesturing sketch out the desperation of the dangerous love this mortal woman holds for her hero. McClements acts the role for its every drop as one of the most famous female characters in the canon and it is a once in a generational delight to see her rendition of this famous character. She is Cleopatra. 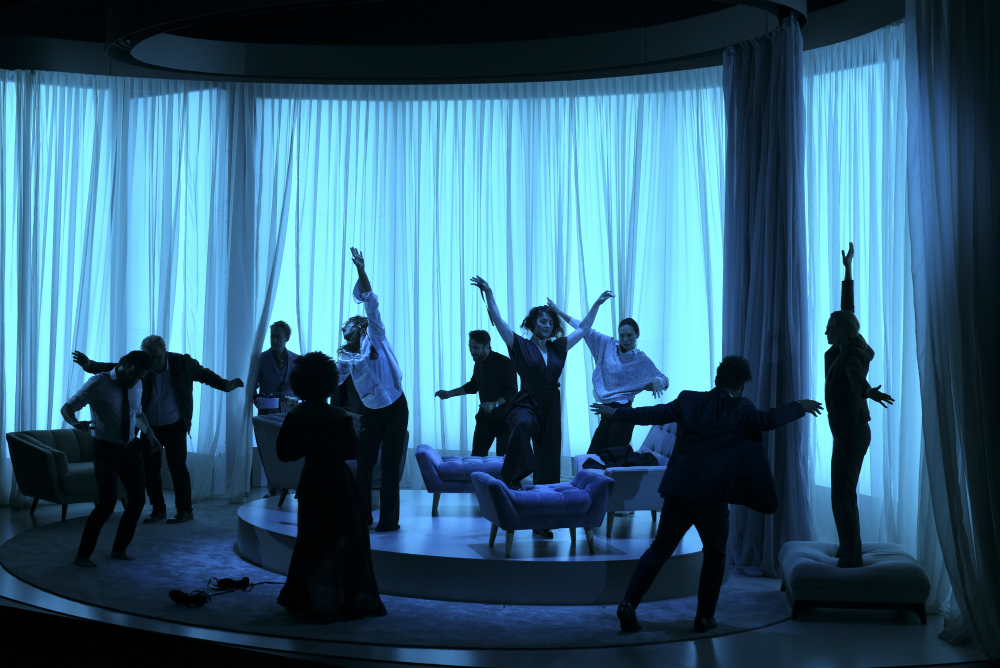 The other personal relationship is of Antony with his friend Enobarbus, who follows him into war and the domestic. His voice is that of the loyal observer who comments on the folly of action, later deserting his idol to defect to Ceasar’s side, to his greater regret and suicide. His actor, Ray Chong Nee, is quintessentially ‘Shakespearean’ and could appear on the very Globe stage, utterly at home. He steals the show with his melodious speaking, and artful body language, seeming utterly Elizabethan. He gives us the very honey voice attributed to the author. I closed my eyes and listened to his delivery, transported, as one can often be by Shakespeare’s best writing. Gareth Reeves animates consistently the cunning of Octavius Ceasar, and Cleopatra’s lady servants, Charmian and Alexas, are gently contoured by Zindi Okenyo and Janine Watson, adding the tone of woman’s counsel to the harsh clash of egos.

There is so much to marvel at in this production. It’s a Shakespeare for our times.  Go down to hear the famous lines, feel yourself back in ancient Egypt, and get caught up in a doomed union. This is wonderful drama that is not often performed.

Check out their At A Glance Guide to the work.