NGV Australia is showing a two-part exhibition about early colony, which tackles the sensitive topic of settlement.

Australia: 1770-1861 and Frontier Wars are about Australian settlement from two perspectives, one of the colonising pioneers and the other of colonised people. The first part displays art, design, and documentation that were produced by early settlers. The second part displays cultural works by past and present Aboriginal people.

There is also an unspoken third perspective connecting the two exhibitions, which is that of the public institution. Increasingly, institutions are expected to understand their role in reinforcing values or opinion, through seemingly neutral activities like collecting and curating. With this exhibition, NGV administrators are recognising their capacity to shape conversations on reconciliation. It is a timely and relevant approach for a politically sensitive topic. 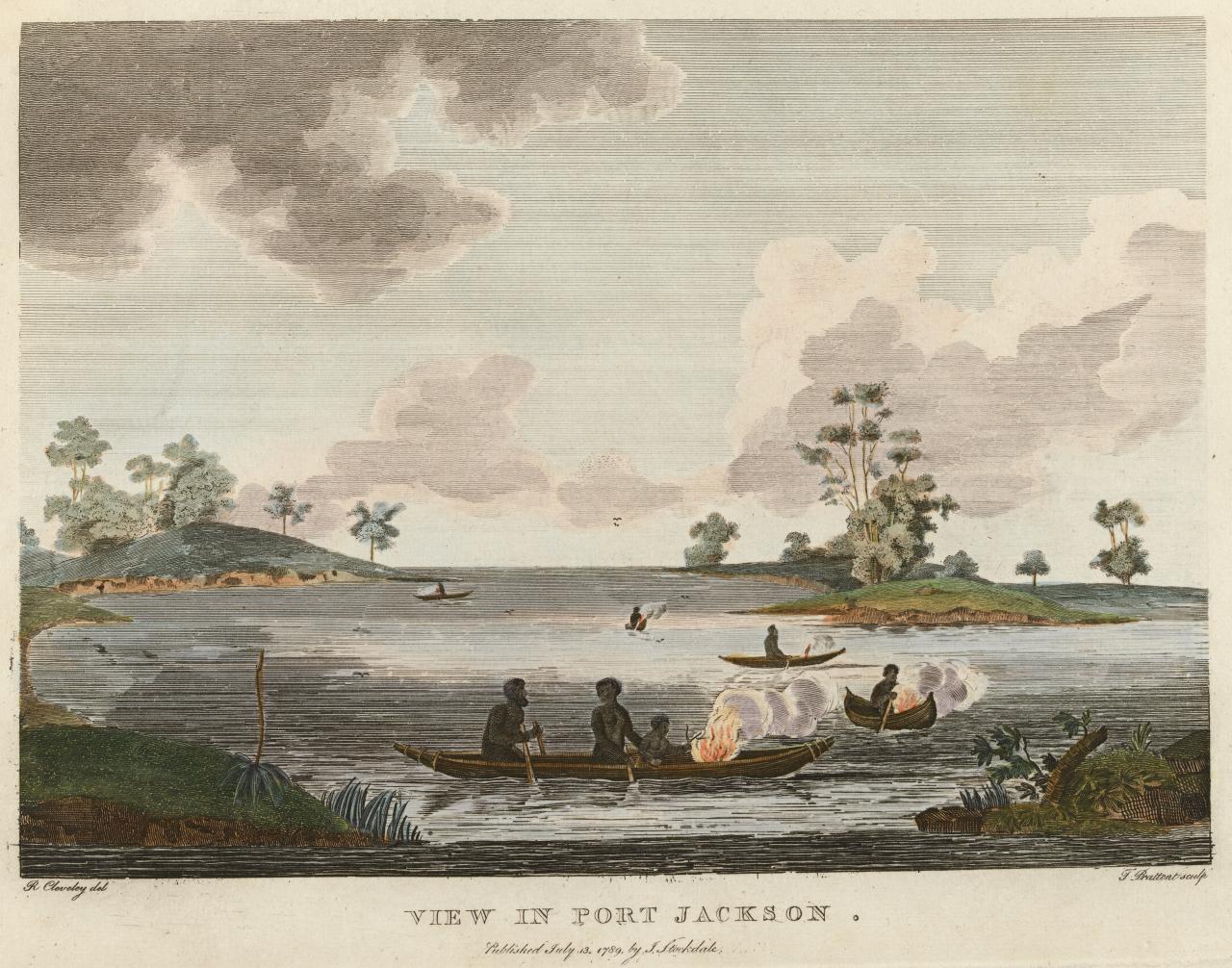 A broad historical context is initially provided through Australia: 1770-1861. This dates from the landing of James Cook up to the founding of the NGV, frame events which connect exploration activity to the making of cultural identity. It is the largest colony-era exhibition staged in Australia, with 640 exhibits. As a survey of English and European ways of understanding place, various forms of visual media are included. Also included are images of and objects by Aboriginal people, that indicate the colonial gaze in choosing what was worthy of collecting.

Unknown (England) Thomas Watling (after) View of the town of Sydney in the colony of New South Wales c. 1799  3

Parallel to achievements of culture for settlers was a loss of culture for Aboriginal people. The strongly-worded Frontier Wars does not have nominated dates in its title, for the nation-state of Australia remains a continuation of unjust settlement. Rooms are organised thematically — instead of chronologically, geographically, or scientifically — as a point of difference to English and European narrative. All themes represent a category of loss: ancestors executed, lands desecrated, and communities relocated. When the English claimed terra australis incognita (unknown southern land) to be terra nullius (nobody’s land) the existing inhabitants were disenfranchised of country and identity.

Artworks in this parallel exhibition are of traditional and conceptual work that represent multi-generational Aboriginal trauma. Some use a visual language that coincidentally share Modernist traits, in flattened perspectives and stippling techniques. Others are about self-expression. All convey a wounded psyche, sobering to see in contrast to the settlers’ wunderkammer exhibition. 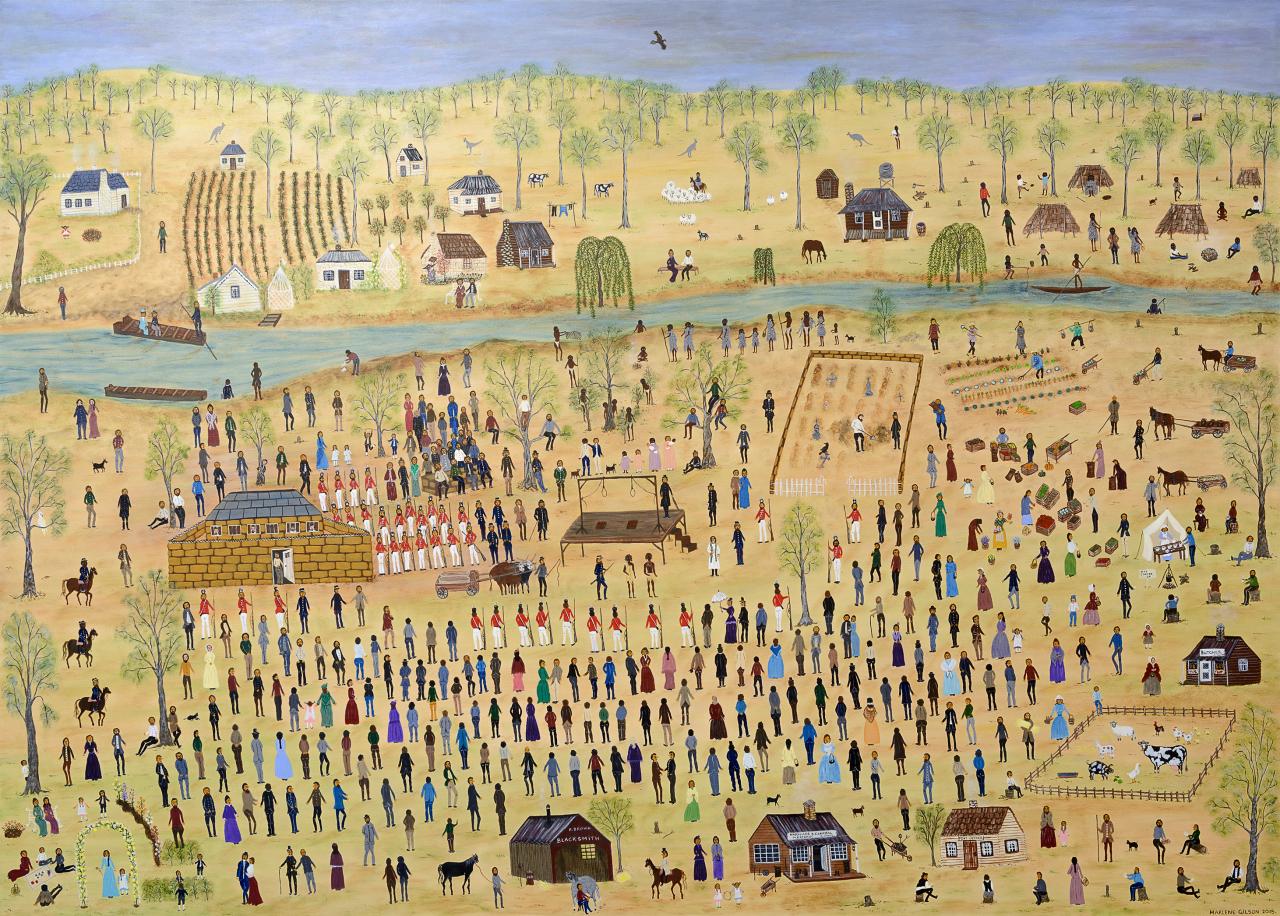 The most powerful artworks subvert visual art tropes. Tunnerminnerwait and Maulboyheener (2015) is a flattened aerial view of a pastoral colonial scene. On closer inspection, a gallows structure and Aboriginal figures are identifiable. The kite bird flying overhead is witness to a historical execution, of two men who imperiled colonial settlers.

Cultural custodians like galleries and museums are not neutral witnesses, a fact that the NGV acknowledges with their two-part exhibition. (In a similar vein this same week, National Geographic editors are self-examining the publication’s past coverage on race.) The NGV is an institution founded by settlers, whose larger presence has been detrimental to Aboriginal existence. Presenting two sides of colonisation is a way of coming to terms with an unequal legacy, by linking the historical record of settlement with Aboriginal experience of loss.

‘Colony’ is a scholarly and commendable exhibition. In an age of echo chambers and partisan nationalism, its curation is a welcome model of conciliation.

Colony runs until July 15. See exhibition opening programs this March 17 weekend at NGV Australia, Federation Square, Melbourne. Voluntary guides tour the exhibition on Wednesday, Friday, and Sunday at 11:30AM. Entry is ticketed for exhibition and public programs. The venue is accessible.

Disclosure: The Plus Ones were invited guests of the NGV.
Image credits: the NGV.

3. Unknown (England) Thomas Watling (after) View of the town of Sydney in the colony of New South Wales c. 1799. Oil on canvas, 65.0 x 133.0 cm. Art Gallery of South Australia, Adelaide. Gift of M.J.M. Carter AO in 2015, through the Art Gallery of South Australia Foundation, in recognition of the abilities of James Bennett to promote public awareness and appreciation of Asian art and culture. Donated through the Australian Government’s Cultural Gifts Program, 2015.5P55 © National Gallery of Victoria

The Magic Pudding – The Opera

VAMFF: Runway 7 with Grazia – Dedicated to the ‘It-Girl’