Each morning in her studio Del Kathryn Barton looks at this mounted quote: I Have Been to Hell and Back, And Let Me Tell You, It was Wonderful (Louise Bourgeois, 1996). No audience sees the alchemy of transforming private emotion into a precise language. It is psychedelically breathtaking, however, to perceive Barton’s work, for she draws with equal passion from various traditions. On paper, canvas, cloth, and film, she shows animal, floral, sexual, aboriginal, and national motifs as equal inspirations. She likes to experiment with medium, she says, finding both risk and play in the potential expression of paint, pen, and now performers.

“The Highway is a Disco” exhibition is now showing at the National Gallery of Victoria (Federation Square) and it is a wonderful introduction to the two-time Archibald Prize winner. From the interior worlds to which she ventures, Barton brings back chimera, half-human and half-animal, their large, luminous eyes gazing directly at the viewer. Other disembodied globes, caught in the silk web of dreamcatchers, look upon us like the eyes of a peacock’s tail. Bare bodies are reduced into contorted, surrealist lines. Aboriginal dotting or multicolour spotting are a recurring flourish on canvas and collages. Flowers mask faces. Hers is an expressionism that is entirely her own.

Barton won her first Archibald in 2008, for a depiction of herself with her children. “you are what is most beautiful about me, a self portrait with Kell and Arella” is from an early aesthetic period, which coincided with her first pregnancy. (This piece isn’t included in the exhibition, however its vocabulary is key to knowing her sources.) In this depiction, wide-eyed gazes are a motif inspired by the gaze of newborn Kell, during Barton’s first minutes of motherhood. The family trio is positioned to appear as the many-armed incarnation of Hindu deity Shakti (or Amma, meaning mother) with Barton in childbirth straddle. Surrounding moss and entwining vines harkens to a naturalist setting, an English tradition of portraiture practiced by society painter Gainsborough. 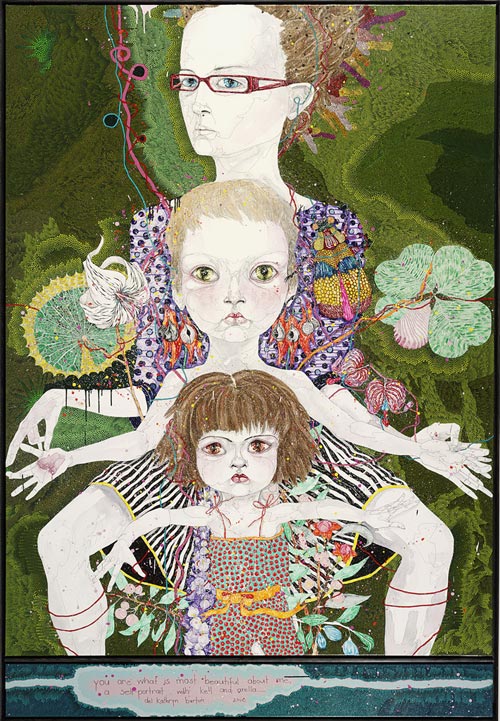 you are what is most beautiful about me, a self portrait with Kell and Arella, 2008. Synthetic polymer paint, watercolour, gouache and pen on polyester canvas, 280 cm x 180 cm. © Del Kathryn Barton
The motifs of vine and line drawing is a style commonly found in historical illustrations of European fairytales. The multiple limbs and artfully curled fingers are a reference to South Asian epic narratives. Dot-paintwork represent the Aboriginal aerial perspective of landscape from above. These ways of seeing —European, Asian, and Australian — share a lack of perspective points, and an intent to communicate a folk imagination or social history. Through portraits of the Australian actors Cate Blanchett (Mother, 2011, an Archibald finalist) as well as Hugo Weaving (hugo, 2013, her second Archibald win), and nameless allegorical figures, Barton is expanding the original scope of folklore iconography. It is a style of portraiture that is wholly unusual, for it makes corporeal figures ethereal. 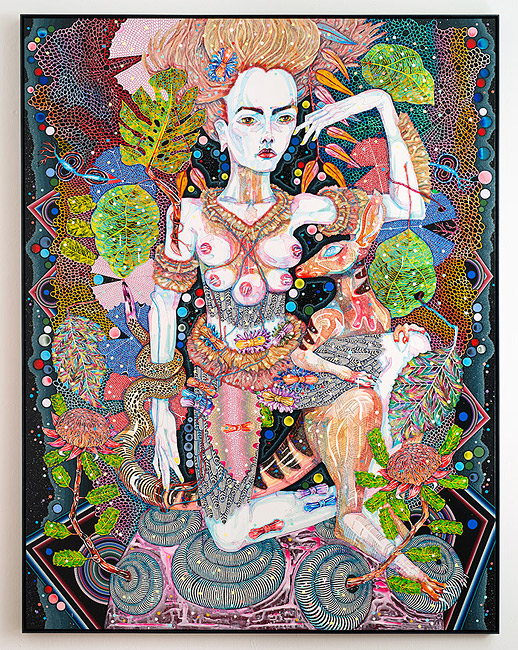 of pink planets, 2014. Synthetic polymer paint and fibre-tipped pen on canvas, 240 cm x 180 cm. Collection of Boris Tosic.
New works in this exhibition include the 75-piece series inside another land, experiments in digital photomontage. The hybrid creatures of this series are disjointed female figures, complemented by flora and fauna. Multicolour spotting are a familiar flourish, like confetti in strange lands. An extension of the series is a sculpture dedicated to Barton’s late mother, at the foot of your love, featuring 270 images printed on silk. It is a personal, emotional work that is intended to be a universal representation of loss. By representing multiple functions of a shell (a home, a boat) Barton is referring to ancient notions of death, like mythological afterlife journeys across the river Styx. 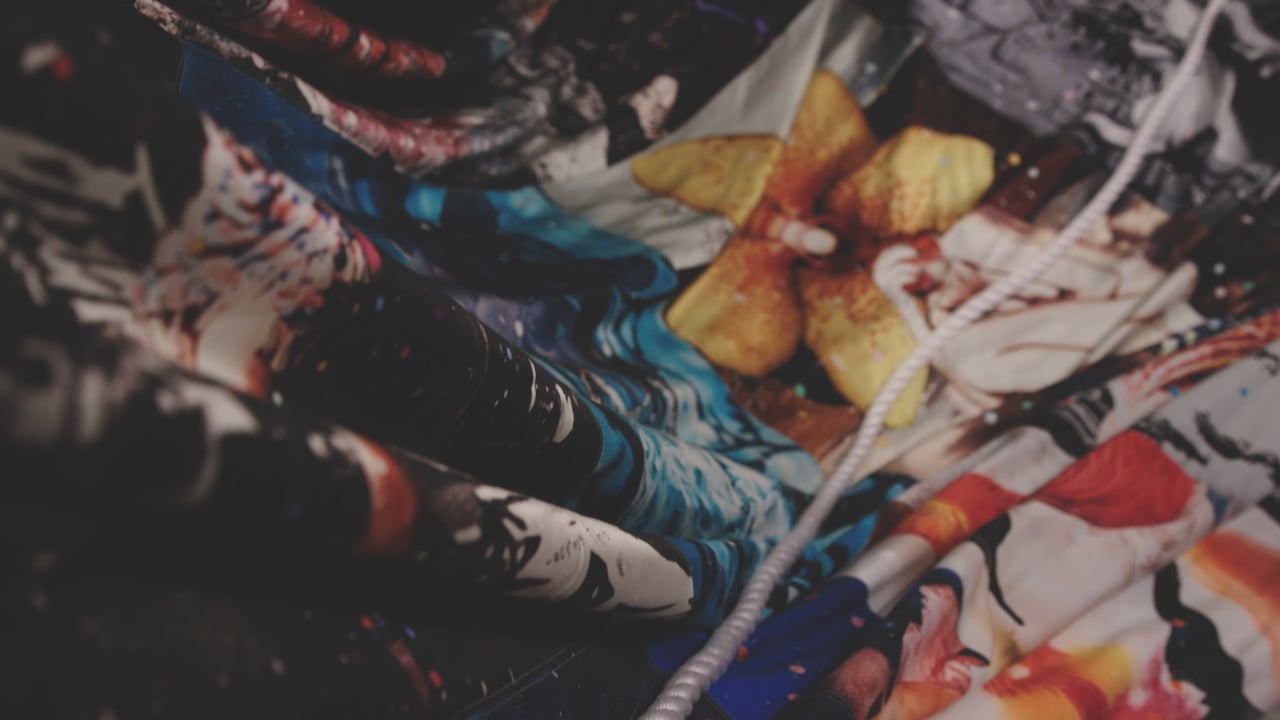 at the foot of your love, 2017. Printed silk, huon pine (largarostrobus franklinii) and bronze. Courtesy Roslyn Oxley9 Gallery and A3. © Del Kathryn Barton (image: National Gallery of Victoria)
Live-action film is a recent foray into directing and producing. The short piece RED, starring Cate Blanchett and dancer Charmene Yap, is set to hypnotic, dystopic music by Tom Schutzinger. It is a visually arresting trip of the redback spider’s deadly mating ritual, an anthropomorphic narrative of power. Barton worked for three years to complete the 15-minute project, which premiered in Adelaide this January.  In this film, as with her other art, recurring themes are of female experience and fecundity. She describes her filmmaking as another medium for risk and play. “They have to trust me,” she says to me, of her collaboration with industry professionals. “I cannot tell ahead what the result will be.” To work with Barton is to follow along as she follows her aesthetic instincts.

Film still from RED, 2016. High resolution digital video, 15 minutes. Courtesy of the Art Gallery of South Australia
Contemporary Collectors 2016, Art Gallery of South Australia, Adelaide. © Del Kathryn Barton
Soundtrack to the film reverberates mutely underfoot, when navigating this exhibition of recent and past work. Perceive the exhibition as a stream of consciousness. It is a style of ephemeris similar to that of Barton’s favoured authors, Louise Bourgeois and Yayoi Kusama. Look past the decorative and the evocative: this is about the spectral and celestial.
– Maloti
Maloti writes about art and books.
“Del Kathryn Barton: The Highway is a Disco” runs until 12 March 2018 at the National Gallery of Victoria (Federation Square, Level 3, 20th to 21st Century Australian Art), Swanston Street, Melbourne. Entry is free.

Disclosure: The Plus Ones were invited guests of NGV.
Image credits: Del Kathryn Barton and the National Gallery of Victoria.

From Ballarat to Beerllarat: craft beer in regional Victoria