A musical about a gay bushranger, once a Pastor, whose death wish was to be buried beside his one true love. At the doorstep of what we sometimes call ‘Australia Day’, premiere Australian musical Moonlite celebrates our untamed colonial history where spirited young Irishman Andrew Scott was gifted the opportunity of making all the wrong moves. Through the passionate life of handsome Scott, we see him carry this out with charisma! Beyond his story is another. Of his love for another man, and is recorded in history.

High country lads themselves, and local VCA graduates, Writer Gabriel Bergmoser and Musical Director Daniel Nixon, have crafted an energetic masterwork. Accompanied by a live band of four, featuring traditional Celtic instruments the bodhran and fiddle, music and spirit lies at the centre of this piece, echoing the melodic spell Mother Eire casts on her children. Their protagonist holds a biography the best Hollywood writer only dreams of (…half the story you don’t know, half you won’t believe…) and his story is parlayed via a fleshed out, full bodied work of musical theatre that has you on the edge of your seat as you travel down the rocky path to his sad doom. 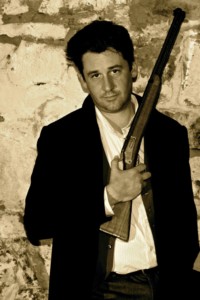 Floating between northern Victoria, and into NSW, Captain Moonlite was the moniker he gave during his crimes, often attired in cape and black mask. With adventurous gusty and a pace that doesn’t stop, this work has it all. Early fighting in the Maori Wars. Trips to paradisical Fiji, which Scott yearns to return to – with his lover. Petty street crime, stagecoach robbery, bank hold ups, small town sieges, and stints inside infamous Pentridge prison. It’s a back catalogue modern era criminals would envy.

An trained engineer, he used oratory as a means of justifying his moves, garnering sympathy, inspiring action, and railing against his oppressors, the law and its enforcers, the constabulary as well as the higher classes. A mercurial career included almost ten years at Her Majesty’s pleasure, public lecture tours, regular gentlemanly gold bank deposits, clerical appointments, and a rag bag of anecdotes. You will wonder at what might have been had this man not crossed to the wrong side of the tracks. 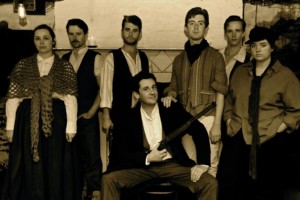 Seated in the basement cellar of an hundred year old pub with bluestone walls, the atmosphere is lively. I felt we were in an historical siege at a pub, held up by these garrulous youths and trigger happy desperadoes, drinking, talking, and dancing with terror. Watch you don’t make eye contact with one in case you get into a fight!

In period costume, all cast thrill to portray their characters, with good Irish accents. There are lots of crowd scenes, with female insertions filling out the masculine bravado. The writing team tap into the humour of his band of young men’s tomfoolery, who handle pistols and beer bottles with equal ease. It’s depictions reminiscent of Shakespeare’s writing about young men bound to end up in trouble.  There was lots of laughing in the audience especially at lines about wombat brains  and inbred magpies, testament to the quality writing offered throughout. Its author betrays intelligent insight into this contradictory character, revealing the darkness and light contained within (he argues for the innocence of his younger followers on capture as well as cheating people out of money) and the eomotional tone fluctuates between brazen brutalism to tender intimacy and touching truthfulness. All good plays require this and with Captain Moonlite, Bergmoser shows it in spades. 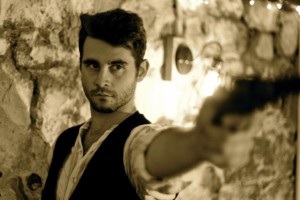 The Captain is fascinating material, acted with brilliance by tall, dark, heavy- bearded Tim Constantine, who channels an elemental focus which his namesake surely possessed. It’s hard to pinpoint Scott’s real motivations, or, in fact to know who he really was. One thing we are clear on is his commitment to Nesbitt – he leaves explicit written record of seeing him as his ‘partner’.

A fellow jailbird, the younger James Nesbitt, more composed and pragmatic, is sensitively portrayed by his opposite, golden-voiced Ryan Smedley. Watching two figures of such popular repute circle each on stage other is something to behold. A tragic twist, recorded in history, is recreated centre stage for us. As history recounted, Moonlite’s own capture was sped up when he’s stalled by his partner’s tragic killing. Later, you will hear of how they eventually did lie side-by-side for eternity. The story of his exhumation is one for the ages, deserving celebration this close to the date marriage equality was put into national law. 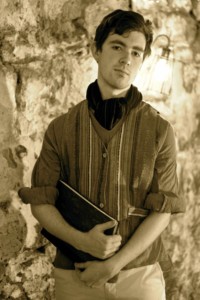 The plot is peppered with song moments as well as dance and the cast choreography and positioning is excellent as the drama/s build. The band is a thematic inclusion and essential play element, positioned in front of a cavernous old fireplace. They weave in dramatic emphasis, with authentic historic Irish tunes as well as bawdy and heartfelt songs for Scott’s story, such as the Letter Song and rousing Send Me Away. The show concludes with an original Irish last drinks salute. The music is the background to this tale and you will want to get up and jig. 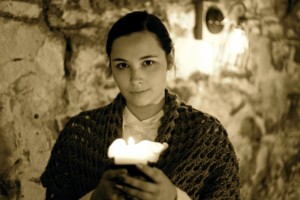 A rollicking account of this complex bad boy is one which will never not entertain. With original songs to die for, great performances, passion and punch, you will feel something of the wild beauty of Captain Moonlite’s own spirit touch something deep within you. It will succeed where ever it travels because of this, like the man himself.

Honour these talented Australians producing rich work telling national stories and see it before it begins its thrilling onward journey. The Captain himself would be up for the ride!

Moonlite shows 17 January – 4 February, SOLD OUT, with one extra show added 7:30pm, Monday 29th (90 mins) at The Cellar, The Grace Darling. Book here. The venue is not accessible.

Disclosure: The Plus Ones were guests of Midsumma Festival and Bitten By Productions.