A cheekily exuberant rendition of Shakespeare’s comic romp, Much Ado About Nothing, shows for three weekends in the St Kilda Botanical Gardens Rose Garden. On a relaxed summer’s early evening, there is no better way to celebrate all that is summer amongst the high hedge and scented flowers than via this famed comedy of ridiculous lovers so reminiscent of the original open-air showings in Shakespeare’s Globe Theatre of 1599. Bawdy and crowd entertainment were the name-of-the-game of this high-volume production house, not stuffy classicism. 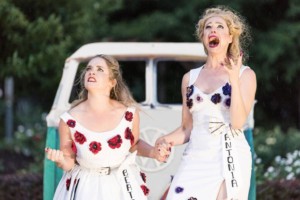 The title says it all- this play is a silly romp of mixed messages, gossip and rumours for two headstrong opposites who protest their love of the single life a little too loudly…before falling madly for each other. A play with feuding sides, it’s a challenge of wits with one camp led by haughty Beatrice who will not lower herself to arrogant cock, Benedick, backed up by his testosterone-charged show boyz. Both are acted with superb aplomb by Annabelle Tudor and Fabio Motta, who take to Shakespeare as total naturals and hold focus on the stage. It’s a treat to see them carry their characters so well, presently excellently to the crowd. They are tight and confident with the text, choreography, posturing, the whole shebang and so can relax to entertain us! 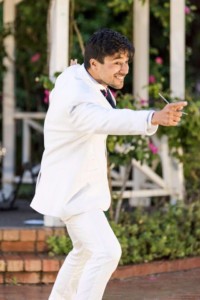 You never feel like you are hearing high literature with this company – director Jennifer Sarah Dean makes the language fall trippingly on the tongue, inserting it into the modern vernacular. There are many joyful quips which get a contemporary spin, including a timely reference to marriage equality late in the play! and pleas to the good people of Melbourne! It’s interactive fun as with all their shows. Khisraw Jones Shukoor is again hilarious, as towering authority Don Pedro. He relishes overstatement, mime and comic timing, as does Jacob Machin as Claudio. All the actors make strong efforts to get into the Shakespearean joust with their characters.

Like all Melbourne Shakespeare Company’s productions, the costumes from Rhiannon Irving are like icing on a cake- rich, colourful, over-the-top, and playful must sees, with their CD, cassette tape and vinyl record fascinators, flashing light headdresses, and comically camp patterns, embellishments and fabric atop stark white making this team like a animation of cartoon characters come to life! The sets rework contemporary spaces which the cast move about in buoyant vibrancy, dancing in and out of scenes, before, at the sides and from behind us, with a musical-style presentation. The dance choreography from John Reed is skillful yet fun and turns any speech into a dance moment. At times it was like High School Musical with opposite sides in song and dance ‘battles’! The reworked pop songs will fall freshly on your ears as you witness them inserted into a play from the middle of his successful career. 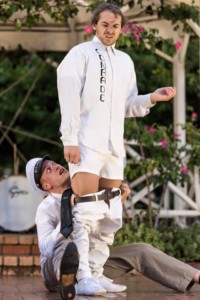 Cast voices excel, backed in the rotunda by drums and acoustic guitar. Alia Syed’s props of 2-dimensional cars – a Kombi van, Keystone Cops Security vehicle, and a red racing convertible- add further cartoon like humour to a show which delights in all the abbreviations known to its audiences- slang, witticisms, gestural clowning, and pop culture references. Much loved police idiots, Constables Dogberry and Verges, travel into the ridiculous and are strongly rendered by May Jasper and Johnathan Peck. Bill knew how to set up a great story, put the comedy just when we need it, and to make fun of noble fools – those whose ideals of love and value are so high they miss a perfect opportunity when it’s right in front of them. This play has it all- loving children, doting fathers, bad girlfriends and annoying mates. Misinterpreted action, wrongful authority, and the unifying power of true love. It ends in two marriages as all comedies should. 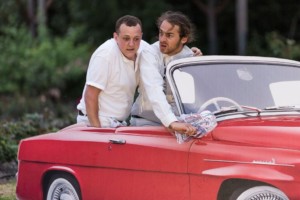 A relaxed convivial crowd of all ages sat in the generous seating offered and laughed, supped and cheered with the goodies and baddies, which is encouraged. Dean’s team have another hit here and we are privileged to see his work shown locally with such knowing confidence so regularly.

It gets cool as light fades so bring a jacket. Food and drinks welcome.

Keep an eye on their website for info on Twelfth Night in March 2018, and their Facebook page

Disclosure: The Plus Ones were the guests of The Melbourne Shakespeare Company.

culture popular slider
City Of Port Phillip Jennifer Sarah Dean Melbourne melbourne shakespeare company Much Ado About Nothing St.Kilda Botanical Gardens The Plus Ones The Plus Ones Melbourne William Shakespeare

Touching Hearts in Song For A Weary Throat