Kate Sulan and her group Rawcus’ 2017 masterwork has themes of despair and alienation many of us in this present day relate to. Inspired by her flagging will to dance, group work Song For A Weary Throat, with live sonic accompaniment by clarion champions The Invenio Singers, touches the heart because it comes from the heart. It is a work about recovery from trauma. In a world constantly threatening war, with world leaders beating their chests with their ready arsenal of punitive militarism, modern day workplaces that push people and production to their limits, discarding both in endless churn, and with the rising cost of living sidelining the vulnerable, this work is one for its time. It’s personal, human, and affecting, asking big questions. 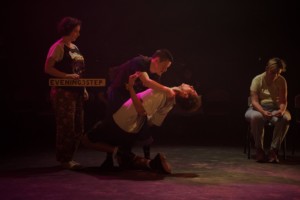 A cast of fifteen mixed-ability, aged, and gendered performers, range over one of the best sets I’ve seen in 2017. With it’s climbing ivy and deposited sand from on high, we feel the stuffy thick air where breathing is stifled. A violently collapsed building, covered in detritus and dust, broken rubble, and outdated public furniture is the zone for living upon which people climb, dance, stumble, partner, move and touch. From small gestural moments Sulan unravels the psyche within human encounter. Intimacies such as falling, dancing in pairs, climbing a ramp, following in a group, watching, reacting, processing emotion or reflecting, are handsomely revealed by skilled practitioners who share their delights of discovery within the larger canvas. The everyday and small is here transmuted into gold, and art. 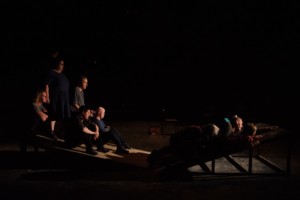 Resembling the set and action of acclaimed German choreographer and theatre maker, Pina Bausch, there was a filmic and architectural grandeur to the work. Emily Barrie and the team who created this set deserve commendation. In the cavernous, high-roofed space of Theatreworks, Sulan and her production team used every inch of air to incorporate a broken world into the theatre. This space makes no literal sense but it magically resembles a dream or our unconscious. Each smaller set piece is variously incorporated into the movement sequences. The dancers move in singles, pairs or groups as if survivors of a catastrophe regrouping in the recovery shelter. Skate ramps, generic, coloured plastic chairs, brick walls, transport signposts move in and out of small interactions between the cast who tell a story as if from a Renaissance painting of The Apocalypse. There’s a lot to look at with action occurring all over the space, sometimes simultaneously. 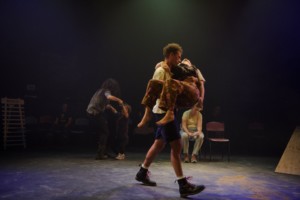 The singing is viscerally touching. It cuts into your heart when accompanied by the delicate embroidered dance work of the performers. Your eyes are free to range. There are touching stills-like moments which present heart-aching photographic snapshots: a person collapsed up against wall, people observing other movers offstage, new people encountering each other, people offering each other comfort. There is darkness overhead and little light. These visually moving arresting images are available as if pleasures from a glorious dark banquet right across the performance space, available at any moment in this non-linear storytelling. While appearing lost in decay it is moments of human engagement which point to any possible future, with recovery in the present the first need.

This quality company shine yet again, presenting us with evolved works that give rich reward through asking deeper questions. There are highs, lows, and hope here. See it as a touchstone for what a community of people can gain when they get in touch with themselves, each other, and with experience, removing themselves from the violence of a world dangerously troubled.

Keep up-to-date with Rawcus projects via their Facebook profile, and for The Invenio Singers

Disclosure: The Plus Ones were the guests of TS Publicity.

‘WE ARE LIGHTNING!’ at North Melbourne Town Hall

A Shakespearean Skirmish of Wit