A night of song from some of the twentieth century’s finest rockers, The Songs and Tales of Angry Old Men takes you to an altar where you can worship all the great male musicians you’ll never see on one set list in any lifetime. It’s the ultimate rock wish list, combining rock, blues, poetry and prose, featuring 20 famous works from the likes of songwriters Bob Dylan, Leonard Cohen, Tom Waits, Nick Cave, Johnny Cash, John Mellencamp, and Neil Young.  Each musician is a rock god with their own cult following but to hear their great songs on one set list is something you would die and go to heaven to behold. Chris Keeble and her Rockumentary Series delivers it here, on earth, with a team of musicians and performers who demonstrate their love and respect via their performance.

Top quality musicianship is up front and centre from moment one and it’s a thrill to see the group blend in action. Their combined musical excellence gels well, lifting the songs, and is visibly on display. The music from this era is powerful in storytelling, narrative, and lyrical richness. It comes from an era where one man on stage telling his truth was a continuation of the balladeer’s tradition. If you were alive from the 1960s onwards, you will know all the lyrics, guitar twangs and seminal notes, and this performance is like Rocks’ Greatest Hits come to life. With one masterwork after another, you felt the spirit of these independent souls, such as Ireland’s Van Morrison, all about the room.

What’s so special here is hearing the words and music presented live, by musicians, as they were meant to be, not just through the muted warp of a radio or YouTube video, and the effect is tangible. You feel the stories emanate from the stage, moving out into the room and through our bodies. People got up and danced. You’ll find yourself singing along. 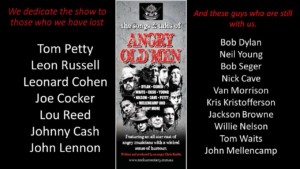 In a relaxed two-part show, you get a brief outline of the history of each of these legendary rock greats, revealing influences of setting, place, and composer character, as band members take us back in time to the who/what/where of the songs’ creation. They reveal historic festival and recording dates, who knew who, who’d played together, who’d feuded. Who had big egos. Who’d flopped, who’d been reborn, and who was still going strong into their eighth decade. This is all part of the package in this show, backed by visual projections, animations, photos, and quotes that honour the work of these artistic titans.

A rugged five-piece, with variant masculinity, stride the stage, with their individual instruments. Frontman Matt Ross commands and wittily interacts with the crowd on lead guitar. Tall Wayne Kellett with his cowboy hat and long overcoat adds moody and melodic tones vocally with deep bass guitar. Hard-working drummer George Brugsman keeps the timing tight, and Musical Director Jeremy Edwards adds a delicacy and finessed attention to detail, with his leadership is a credit to the whole team. The addition of accomplished female singer and keyboardist Di Solomon adds a richness and the higher notes needed, taking the show to another level. Her version of Dylan’s To Make You Feel My Love rivaled Adele’s and she was a real asset on all songs, especially Petty’s Stop Dragging My Heart Around with rock goddess Stevie Nicks. It’s pleasure to hear different performers walk into the songs and make them seem original. 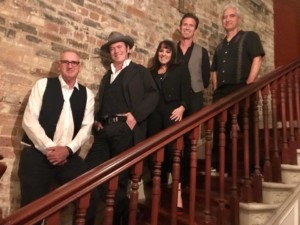 This show is all about the music. It’s heroes, it’s political concerns, its technical innovations, and its passions. The themes cover life, love, philosophy, despair and jubilation, but always with a wry comment on people and the times.

A show of this calibre takes you to the heart of an authentic music experience. Forget digital and CDs. Remember live music and where the magic lives in a night with five musicians giving their all before you. A solid night’s entertainment that reminds us once more of the timeless creative artistry of these marvelous and unforgettable male legends of rock. Don’t miss it!

The Songs and Tales of Angry Old Men showed as part of The Rockumentary Series 18 November at The Spotted Mallard. It plays Victorian regional centres in 2018 and with a return to Melbourne.

Disclosure: The Plus Ones were guests of Fish Out A Water Productions.