With it’s two main characters, vagabond clowns and luckless street philosophers, Vladimir and Estragon, master Irish playwright Samuel Beckett offers the world man weary of life, confused by its contradictions and perils, and fatigued by the hope religion proposes for what, to him, post-WWII, resembled more a trial of endurance than ‘life’. A superbly rendered and lovingly crafted new production is deeply affecting for more than one reason.

Waiting For Godot is the premiere production in Australia for Wits’ End, a new incarnation of Fitzroy’s award-winning, independent company, The Eleventh Hour. Its two leading actors, John Jacobs and William Henderson, once played this role early in their careers, in their twenties. Over forty years later, the resonances of age show beautifully now, making the tenor, setting and incarnation of these two street street bums so much more compelling. Age gives a patina no youth can ever own and Beckett was a man who scorned the facade of innocence, preferring the sardonic realism of those who have lived through the many rituals life subjects us to. The journey of the inner man is what intrigued this writer as well as the role of ideology and the state in man’s consciousness. 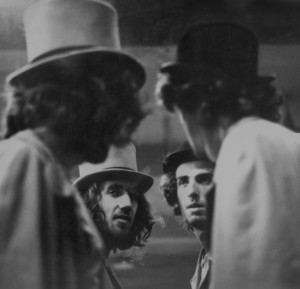 Written in 1955, his play is blasphemy and often misunderstood as holding no action. Its more than that, it’s profound philosophy, asking questions with no firm answers. Described as a play in which nothing happens, twice, this Absurdist masterpiece deftly proffers a powder keg of buddhism, Western philosophical inquiry, nihilism, comedy, and pathos. It is also a testament to language, with a script lovers of the word thrill to hear, with it’s blunt truths and transcendant poetry. You could attend simply to hear these spoken aloud again, as if spending a night inside Beckett’s mind. The meditation is as fresh in 2017 as it was ever, revealing Beckett’s work as timeless. Hearing these words aloud is a tonic against the crazed pronouncements of social media and the flimsy leaders of our world. 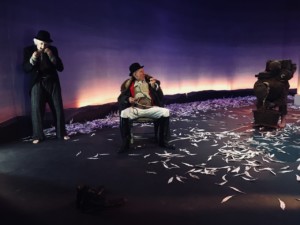 The acting is top quality with both exponents long time experts in the craft,  a skill many practitioners profess to hold but are dimensionless pretenders compared with the execution offered here. It’s great to watch two great actors tackling a masterwork at just the right age. Timing and vocal play are critical in this play and this version shows it’s has been offered good rehearsal and care. Jacobs and Henderson bring painfully to life for us the disheveled charm and neglected base humanity of Beckett’s endearing duo. They live the comedy as well as the tragedy. Their bodies bend, hover, crumple, fall and stumble, existing on the periphery. Their words float through the air, left hanging. They grapple to hold threads of certainty while an eventless oblivion seems the only known truth. They both animate the fading alertness which comes to the marginalised, who, whether through age or poverty, are literally ‘thrown to the street’. It could be an ancient world, a post-apocalyptic world, or a Melbourne coming-soon-to-a street-near-you. Man makes the same mistakes, again and again seems Beckett’s comment.

The set and costumes suitably emphasise this decadence, and the washed out empirical authority of the two homeless men, as if once significant persons. Now they just occupy time, with each other, and passing visitors, trying to retain sanity, waiting for a man called Godot to appear. They speak of ending it all, by the aid of a nearby tree, but get lost in the debate… 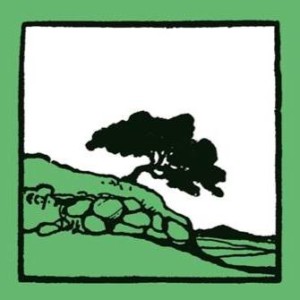 The two other significant characters in this bereft space, Pozzo and Lucky, hellishly demonstrate sado-masochism before our gaze. Watching a two-person dance of abuse as model for imperial capitalism is not for the faint-hearted, yet are fabulously animated by cruel Richard Bligh and in Tom Considine’s supine ballet. Esteem must be accorded to Julie Renton, with her curved, enfolding landscape recalling an outback scene, with a coloured sunset, with virtual eucalyptus leaves strewn about the floor, as rubbish underfoot, making this scene decidedly national. It was touching to see the setting moved to something close to our home with just a whiff of anti-colonialism thrown in. Quality runs all through this production, with vast credits referenced in its Program.

This production is not just an execution of text. It is a loving gesture towards the actor and creative maker’s crafts, the art of theatre, and the magesterial power of profound writing that speaks to all humanity.

This show is selling fast – book quickly if you wish to have the pleasure of this presentation.

Disclosure: The Plus Ones were guests of Wits’ End.