After the stunning first instalment, Adena Jacobs and Aaron Orzech return to the stage with Part II of their innovative provocative series, Book Of Exodus Part II. Theatre in the oldest sense awaits you – captivating, moving, and compelling. A work of majesty, impeccable credentials and process, this is 2017 must see if you love the best quality theatre Melbourne can offer.

Fraught Outfit’s shows are unforgettably unique, the experience trance-like. Their work is brave, sophisticated and told with a magic equal to the power of religious parable. Part II continues the biblical story of the second book of the Hebrew bible. Charting the formation of the children of Israel into a united, monotheistic people, the book continues at their liberation from enslavement in Egypt towards Yahweh’s promised land. Yahweh at first leads them through a pillar of smoke, then disappears to Mount Sinai, where he later summons Moses, conveying the law to him, including the Ten Commandments. In the absence of their God, the Israelites grow restless, burning down their gold jewellery into the shape of a golden calf, who they praise for having liberated them. Yahweh is furious and threatens to destroy them. Moses intercedes, returning to his people, and grinds down the calf, forcing his people to eat it. He smashes stone tablets on which he wrote the law, ordering a purge of all those who refuse to repent.

Descriptions here remind us of other totalising narratives in the name of religion and fatherly rule present in our age, such as those for jihad (holy war). The ruthless indoctrination of devotees is still witnessed in the brutalism of a merciless god who punishes his people for transgressions and enslaves them under strict religious law. 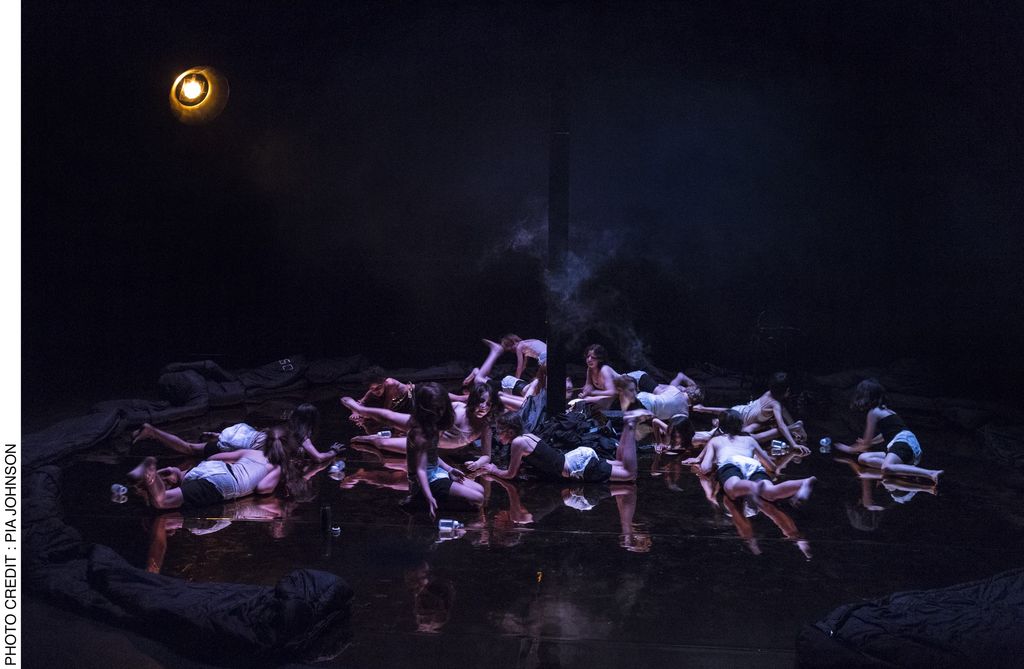 The incredible power of Jacobs and Orzech’s presentation is in its stark simplicity and ritualism through the use of space, cast choreography, and their unique storytelling mode, involving masks and child performers impersonating grand figures such as Moses or Aaron.  On a stark, primitivist stage, coloured industrial black pierced by shards of golden light, sleeping blankets are strewn around what seems a stone age camp. At it’s centre is a pole with base fire, about which a group of sixteen young children wordlessly wander about. Blankly, we see them receive instructions, wander in the desert, lose direction, forget their god’s instruction, and taste his wrath.  A lost tribe, we see aspects of the world-in-crisis we inhabit today through their quest.

This piece is replete with images of desertion, deprivation, and the suffering that goes with being an abandoned people. A gold child’s high-chair, baby bottles, nappies, and a fabulous nippled oxygen device appear in this otherworld zone as signifiers of life-giving succour, but this space is post-apocalyptic, devoid of plenty and resource depleted. Some eat the black dust, smearing their faces with a sticky black, like geological coal or oil. The children seek human comfort, turning to each other, but enact bizarre bestial rituals with and upon each other. The elegantly simple movements of the cast, who move at times as one people, in couples, or as lost individuals in a crowd, call to mind Noah’s Ark with its mass of humanity, as well as many thousands of refugees moving about the world aboard boats, bereft of all possessions, a homeland, as godless people. The images presented in the individual charisma and presence of each child sear you – at times it’s painful to see such innocent beauty in a place so devoid of life, love or care, but your eyes dance about the crowd, caught up in the purposeful activity occurring all about the space. 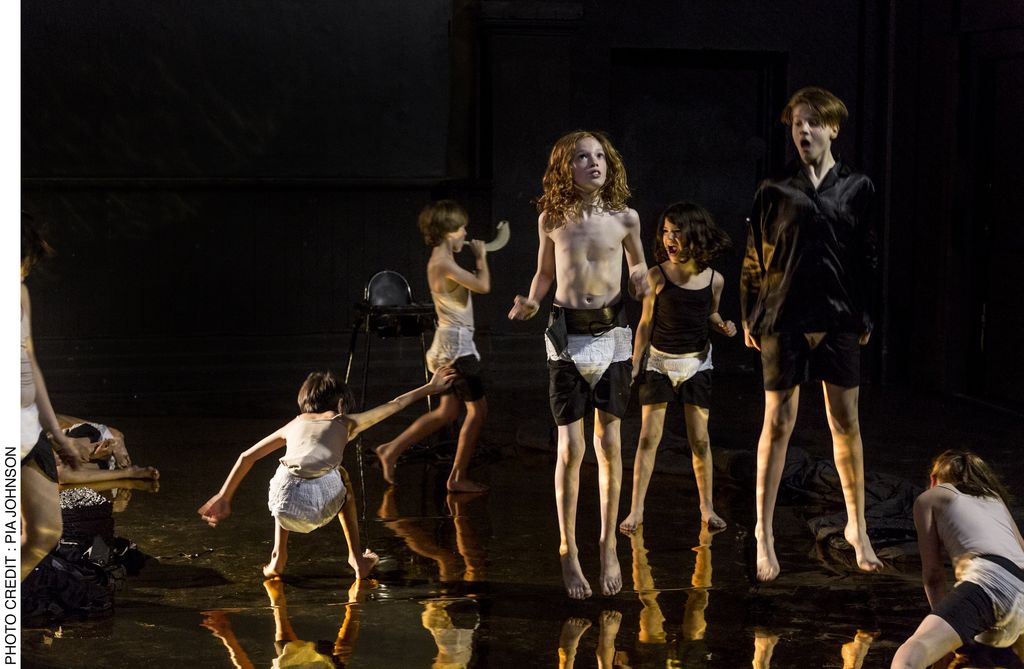 The presentation of this serious adult narrative is masterfully conveyed by a cast who seem bonded as if a people. They enact serious questions, and roles, moving us in their dramatic focus and directness. Their silence speaks profoundly.  Their young bodies are an aesthetic wonder to marvel at in dancerley delight, as are their eyes and facial expressions, which appear as if the painted masks of classical Greek, or medieval, theatre. This work is a credit to the practices Fraught Outfit enact with young people in movement and drama workshops, where students are inducted into the mysteries of performance, grand narratives, self-discovery, and team commitment unique to the dramatic space. Performances such as this series are testament that profound topics can be explored and expressed by the young. The presentation of both works feels like a pilgrimage.

See this work for profound theatre which grabs you deep inside. It’s mimetic ancient storyline and vivid imagining of these people’s quest unseats our 21st century ease, posing troubling questions through beauteous embodiment.

Keep up to date with Fraught Outfit’s newest events on their Facebook page.