A new theatrical adaptation of short stories by Melbourne author and The Slap provocateur, Christos Tsiolkas, Merciless Gods, paraded an underworld of need before a packed audience, elevating us to godly places. A must see show adapted by Dan Giovannoni, this work concerns outcasts and the redemptive power of love. A compellingly acted, emotionally vivid and atmospheric work, the eight tales delighted to rapturous applause.

Tsiolkas has entrusted this first ever stage adaptation of his 2014 collection to queer indie mavericks Little Ones Theatre. In the hands of these theatre makers these stories are told from the perspectives of Greek, Italian, Turkish, German, and Iranian migrants of inner and suburban Melbourne of the 1970s and ‘80s. This world-renowned hometown writer interrogates the lives of people we know- those we went to school or uni with, married, dated or work with, our own families, or who we pass on the street. 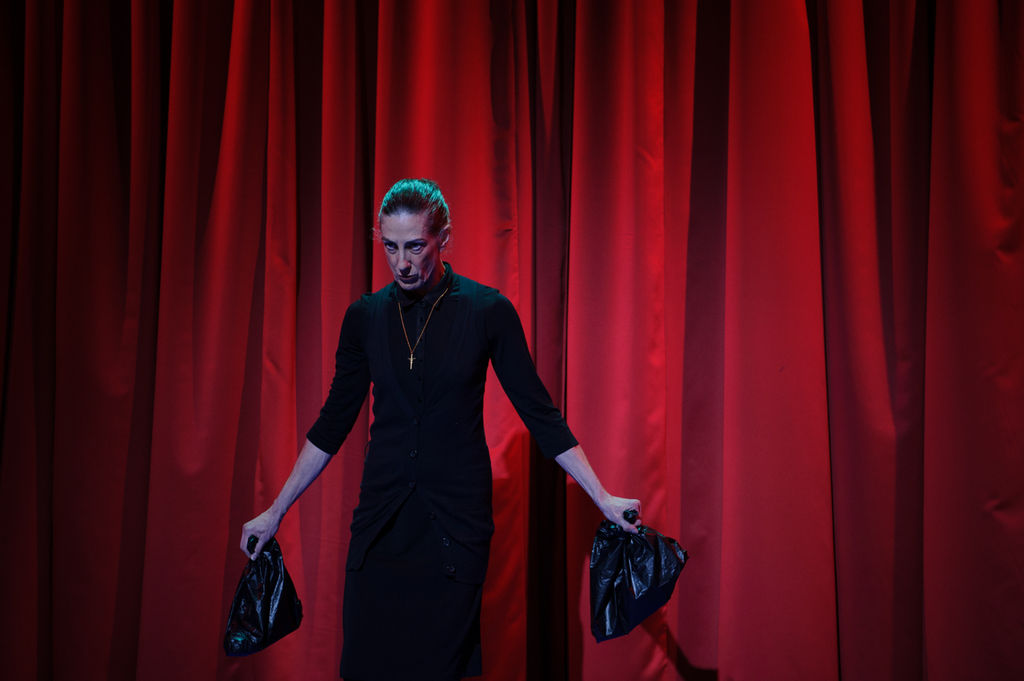 This team of professionals have many Green Room awards to their names as well as a charged commitment to presenting alternative views of representations. Their expertise touches all, with sound, lighting and costume exemplary, recreating eras many of us recognise from our youth, setting the emotional tone. The script doesn’t work over Tsiolkas’ bones too greatly, allowing his stories to stand in their powerfully stripped-back essence, which is tantalisingly made flesh for us. The beguiling cast give us his language, which reads like poetry and entrances. Ringing through the hall, they transport us into Tsiolkas-magic.

This world is the B side to the airbrushed populist ‘Australia’ that dominates collective culture. It’s writing about male homosexuality and gay practices, which Tsiolkas centres within a mainstream counter story of ‘family’ and Australian identity. His stories touch the depths of human need and feature erotica, addiction, prostitution, casual violence, racism, as well as ancestral ghosts. 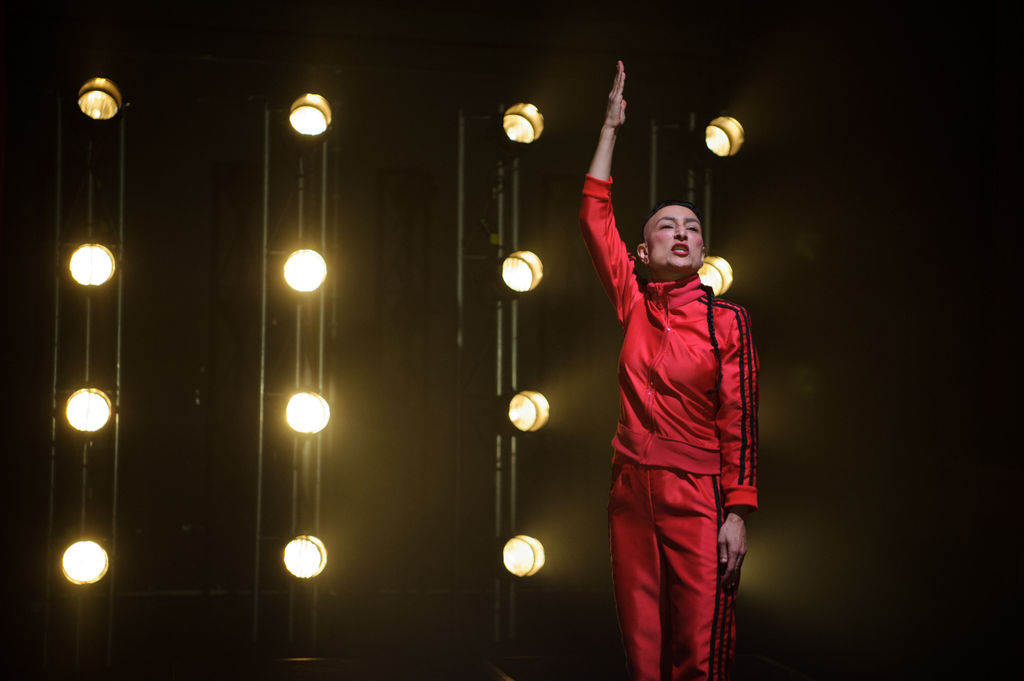 The stories’ realm is the domestic —  soccer games, funerals, lounges, house parties. Coming of age reunions, job promotions, and overseas travel. They could occur in any home today or share house. They concern daughterly grudges against mothers, and mothers for sons. Old school ties and memories of bullying. Ex-lovers, drug use, poverty, and euthanasia.

This show flinches from none of this grit but, not dwelling on the seediness, concentrates attention on the searing question of the human struggle. The characters’ stories depicted show us when you are on a knife edge, you most know you are alive. 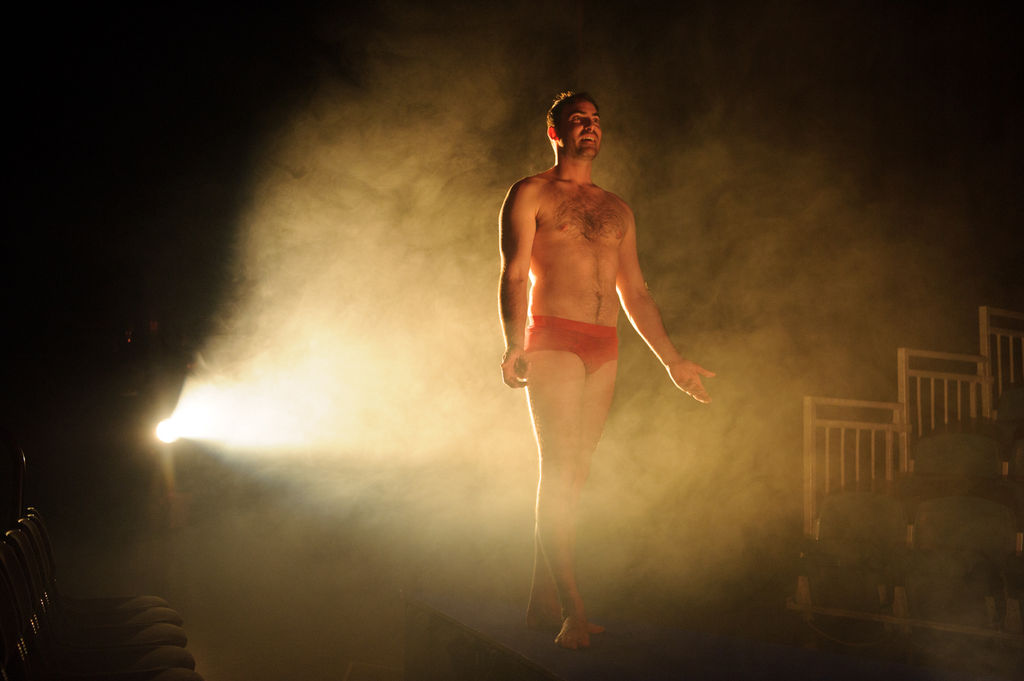 Tsiolkas revelation is the presence of the sacred in the everyday. In dark places, he reveals his fixation with the holy- with salvation, the search for god or transcendence, and many of these stories are couched in religious terms, both of the secular, classical Greece, and of the Orthodox church. Often a life of pain is made tolerable by acts of love between people, transcending class or origin, and Director Stephen Niccolazzo starkly reifies this in his show.  The rhythm and timing of each short piece is well placed, segueing from one moving encounter to the next.

Superb performances from a top Melbourne cast allow these characters to sing, every action and inflection masterfully placed. These creatures seem ordinary, yet parade like gods down the central catwalk that splits the space. Tsiolkas’ everyday souls soon resemble mythical beings as his philosophical quest moves on to bigger questions. Is it in the gutter that we are closest to the divine? This is very adult material.

Captivating, essential viewing. Venture to the dark side to find the light.

– Sarah
Sarah W. is a dance-trained theatre lover with a flair for the bold, and performance in unique forms and spaces. On the street or in the box seat, she looks for quality works that push the envelope, enlighten, and entertain.

Disclosure: The Plus Ones were guests of TS Publicity.
Image credit: Sarah Walker.