The Book Of Revelations is an exciting new contemporary performance theatre production. Alison Richards is the writer and solo performer and teamed up with Nancy Black from Black Hole theatre along with puppeteers, sound and visual designers to develop a creative response to the current research into the experiences of people living with dementia.

I was handed a set of headphones and ushered into the theatre space. There was no traditional seating arrangement but plenty of art installation and visual effects on walls. Richards, who plays Ada, bursts into the space through a window set and the audience gathers around to watch her unfold her inner dialogues. A discombobulating pastiche of physical theatrical antics inspired by modern opera as Richards uses her voice and body to reveal the gradual loss of her connectivity to the real world. Ada is a powerful caricature of an ageing woman who cannot understand the loss of her own reality. The magic of the puppeteers and their floating teacups reflect a change in Ada’s life as she begins to loose her ability to attend to her everyday chores. 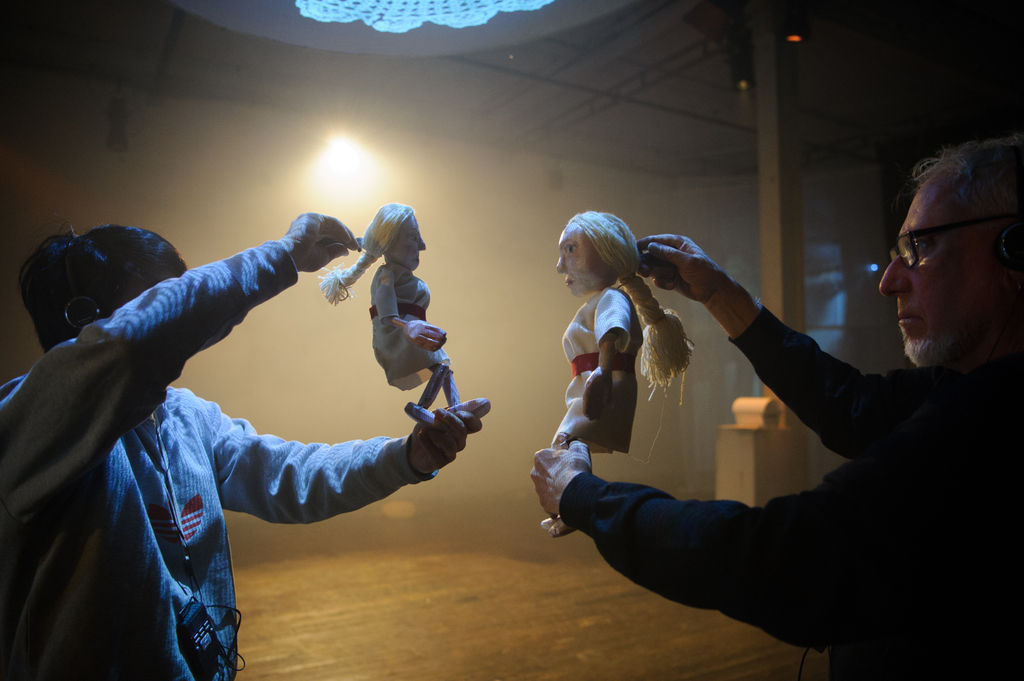 As Ada shifts in time and space we are offered a duality of her fragmented character. The sound booms in our headphones as she mumbles to herself through the train stations. The use of overlapping sounds from the headphones and from the performance space further enhances our experience, as we are part of the floating audience.

The Book of Revelations was performed back in 2013 as part of the La Mama Explorations season. Richards says it has grown enormously with the collaborative support of other specialized artists. The Book of Revelations is a personal story, she tells me after the show. Her father lived with dementia for ten years before he was diagnosed. She said as a daughter of a dementia patient she found it a very disturbing time in her life, as her relationship with her father disappeared when he failed to remember her as an adult and could only identify her as a young child. The play, she says, has been a wonderful catharsis and has helped her develop a stronger understanding in her work as performer and academic to further research the causes and onset of dementia.

The Book of Revelations is an astonishing, exhilarating theatre experience that takes you beyond the everyday. It awakens you to not only a challenging visceral theatre experience but also a thought-provoking study into the unknown elements of dementia. A highly recommend the experience.

– Flora
Flora is a freelance writer and reviewer.

Disclosure: The Plus Ones were invited guests of Christy Hopwood PR.
Image credit: Sarah Walker.

Ned: A New Australian Musical in Concert – blood amongst the eucalypts