A rocking night of Greek drama told as musical theatre was had in Jon English and David Mackay’s Paris: A Rock Odyssey. Australia’s talent top drawer tell the story of two of the greatest lovers in literary history – of Paris and his beauty, Helen – and of the illicit love affair that sparked a brutal decade of war – in words and music that thrill. An electric charge of excitement and drama ran through the audience, as we cheered on opposing sides!

Music Theatre Melbourne with Stella Entertainment give us a must-see home-grown blockbuster that is performing and compositional greatness at it’s zenith. In its professional premiere, this short season has a killer 32 original songs charting the demise of the Prince of Troy. Every song is a classic with key songs anthems sung long after we departed. A work 25 years in readying, it features Jon’s son, Jonathan Sora-English, with a 15 piece orchestra supported by a magnificent 28 person chorus.

Hollywood, television and our best theatre alumni tread the stage as some of the literature’s greatest. As family members, warriors, ladies of stage, kings and their court, commoners and local fishermen: Ulysses, Achilles, Hector, Menelaus, Ajax, Priam and goddesses, Athena and Aphrodite. John Waters, Ben Mingay, Scott Johnson, Kerrie Anne Greenland and Mark Dickinson create the ensemble around the sonic daydream, Matthew Manahan, as lead, with the delicate yet stately Madeleine Featherby as the face that ‘launched a thousand ships’. Stunning vocals, rich characterisation and robust physically are offered every minute as cast hit their high notes.

Costumes, hair and makeup are wicked! Black denim, canvas shoes, leather boots and wrist straps see them as backstreet gang. Studded dress, heavy boots and dishevelled hair show us the might of these warring tribesmen, evocative of the world. 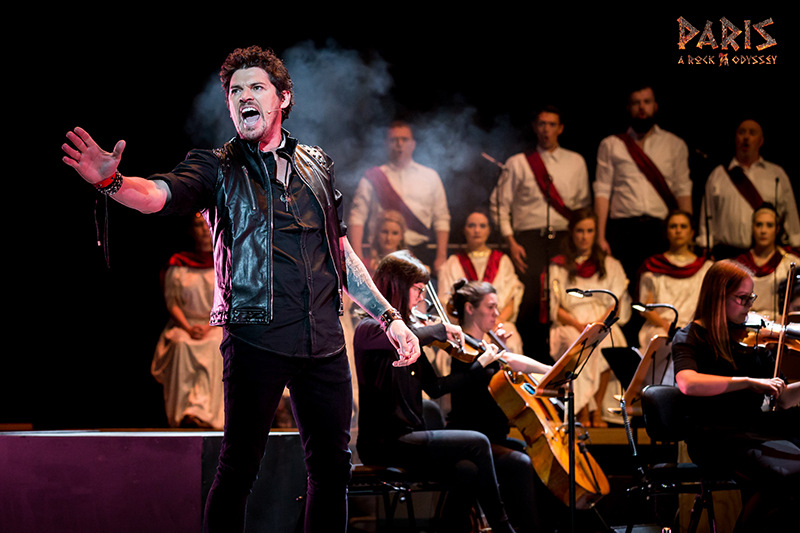 With a voice recognisable anywhere in the country, The Whitlams’ Tim Freedman acts as Agamemnon, one of the male oligarchs who resemble a squad of hitmen. The patriarchs, doing their ‘business’ (a knock out song with current era political portent), resemble bikies. Menelaus’ prized queen, Helen and Hector’s sister, Cassandra bring feminine grace to a world of warlords. Adorned in flowing white, red and olive green dresses and supplicant gestures.

Famous escapades such as the Greek invasion via a wooden horse are hilariously acted by Brian Mannix. Journeys at sea and skirmish fighting figure in mimed sequences, shipboard songs, and through subtle use of props. Rear digitised projection reveals the script and emphasises the action through puppetry.

Cassandra, cursed by the gods with prophetic vision no-one believes, starts and closes this tale about an end to war and of course love. Is love redemptive or destructive? This story has a finish no one predicted.

The dream of a man who loved these classical stories has come full circle in an accomplished major work that will travel far, making the nation proud!

-Sarah
Sarah W. is a dance-trained theatre lover with a flair for the bold and non-traditional performance platforms. On the street or in the box seat, she looks for quality works that push the envelope.

This venue is accessible.

Disclosure: The Plus Ones were invited guests of Cavanagh PR.
Image credit: Music Theatre Melbourne.