‘For How Long Must I Hold On?‘ you may cry when in search of a public convenience to relieve yourself whilst in the city. A fun history walk around Melbourne’s CBD gave the answer: If you are a woman, for a very long while indeed! Women, it appears, were not expected to be seen on the street, nor to participate freely in everyday life in the public domain, for a very great while — and they certainly weren’t expected to be going to the ‘loo.

Learn of the complex relationship Victorians had to bodily functions; of the circumscribed role of women in a repressive, class-based society; and of the the agitation of progressives in this fascinating tour of public conveniences for the feminine gender.

University of Melbourne history alumna Dr Rebecca Sanders, of HistoryCreative, researched this project as private project and premiered it at 2016 Melbourne Fringe Festival. With a high attention to detail, it weaves in many related ‘facts’ about early Melbourne, all covered in our walk around its inner grid. Sanders is engaging and theatrical and has a love of interacting with everyday citizens. History, being for and about people, is something she enjoys sharing with us.

We learn of the history of urinals, from 1859’s first public toilet onwards. From the 1890s, more women were working in the city, not just shopping, and satisfied their needs either in public hotels, marketplaces, railway stations or coffee palaces. It involved a lot of walking to get to one of the two venues available for fee-paying use. At 1915, there were still only two women-only public toilets available, despite many for males.

Concerns about these facilities related to the types (both genders) wont to loiter at public facilities. There are many letters to Council decrying the public offence taken — as well as those from significant early feminist campaigners for equal access rights from the late 1800s on. We learn of the changing social status of women into the early 20th century with more visibility in the city, employed not just as retail assistants, but now as secretaries or dental assistants. 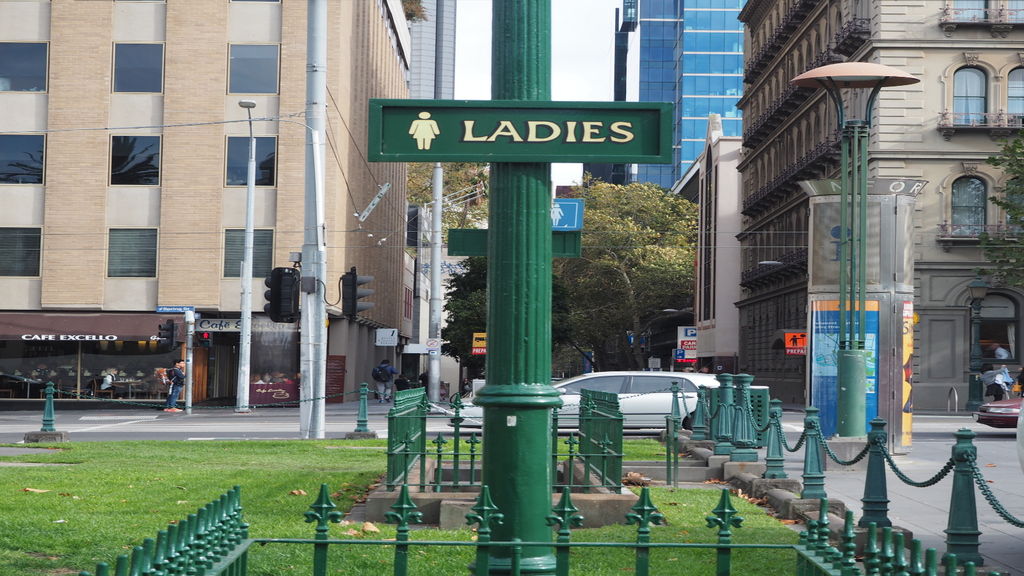 There was a pecking order for usage of these sites, and we travel on foot to five of these, some destructively concreted in. Melbourne has many of these pearls still in operation — Melbourne Town Hall’s higher fee venue (1914), the closest for those ‘doing The Block [Arcade]’ walk further down Collins Street, and the spacious women-only toilets beside the Melbourne Post Office (1910) on Elizabeth Street. Carlton’s 1938 Art Deco ones are still in use in Faraday Street.

Descending into these relics of time past is history-interactive as well as ritualistic. I was introduced as a child by my mother to them on early visits to department store shopping jaunts, as were generations of visitors, and never fail to step in to relieve myself, check my hair, and rest up before facing the crowds again. It’s so lovely to be able to walk in the footsteps of all these women past, who struggled for acceptance, and inclusion, of women in public life.

With their elegant ironwork, solid stone embellishments and refined signage, with Marvellous Melbourne now relishing its laneways and small spaces, we can but hope more will be made of these living historical delights!

For How Long Must I Hold On ran 29 April, 11-12.30pm (90 mins).
The event is accessible, excluding underground convenience visits.

Check out The Australian Heritage Festival (18 April to 21 May) for other heritage event details.