Kate Mulvaney gives us a Richard unlike any seen before in the world in Bell Shakespeare’s Richard III. (And that’s not just because it’s a woman playing a man.) In a marathon effort of physical and psychological dexterity, including a complete disrobement, hers is a bravura show. You cannot take your eyes off her stellar performance, which earned her a deserved standing ovation from a thrilled opening night Melbourne audience.

Director Peter Evans spoke about where this play sits in the Shakespeare canon, coming after the successes of the Henry ‘history’ plays (which chronicle the 100-year-long War of the Roses between the feuding families of York and Lancaster). Here, Shakespeare hit his stride theatrically and commercially in the 1590s. Richard III‘s tally of murders, in-fighting, and final decay is the stuff of legend. You’ll recognise the famous lines ‘I am not made of stone’ and Richard’s lonely battle cry ‘my kingdom for a horse!’ as he dies on the battlefield. 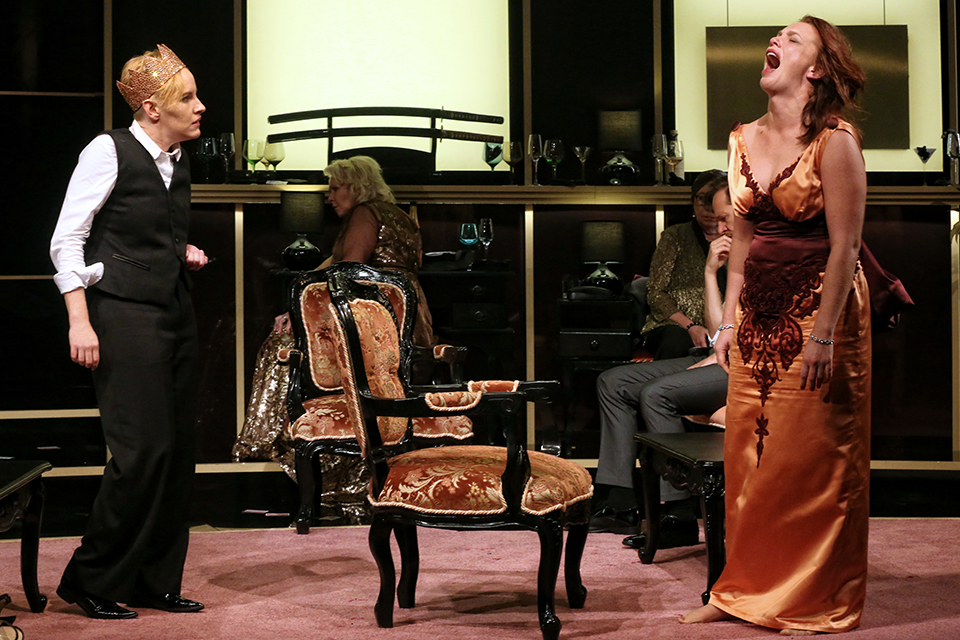 High drama and glossy show are the name of the game in Evans’ version. The set, a glamourous drawing room with a fin-de-siecle decadence, is a space no player can escape from. Gleaning shiny surfaces, all black, cast mean light on the players.

Kate Mulvaney as Richard prowls the perimeter of this family scene, an outsider by disability and preferment. A nimble commander-in-chief, all other characters are subjects to his dark intent. Seducing relatives-by-marriage, then murdering them, are just one of his actions. In the end, Richard himself is undone by the monster within.

Mulvaney limps and cavorts about the stage, amping up his humour as well as his pathos. Richard III’s famously corrupted spine isn’t the only thing contorted. A slow-motion choreography of movements from the cast, with their repositioning of furniture to signal thematic changes of power, emphasised the twists which corrupt humanity. Steve Toulmin’s baroque musical score matched the martial orders in this end-of-empire tale. Anna Cordingley’s stunning costumes were a delicate, detailed, and luxuriant ‘uniform’ of class. 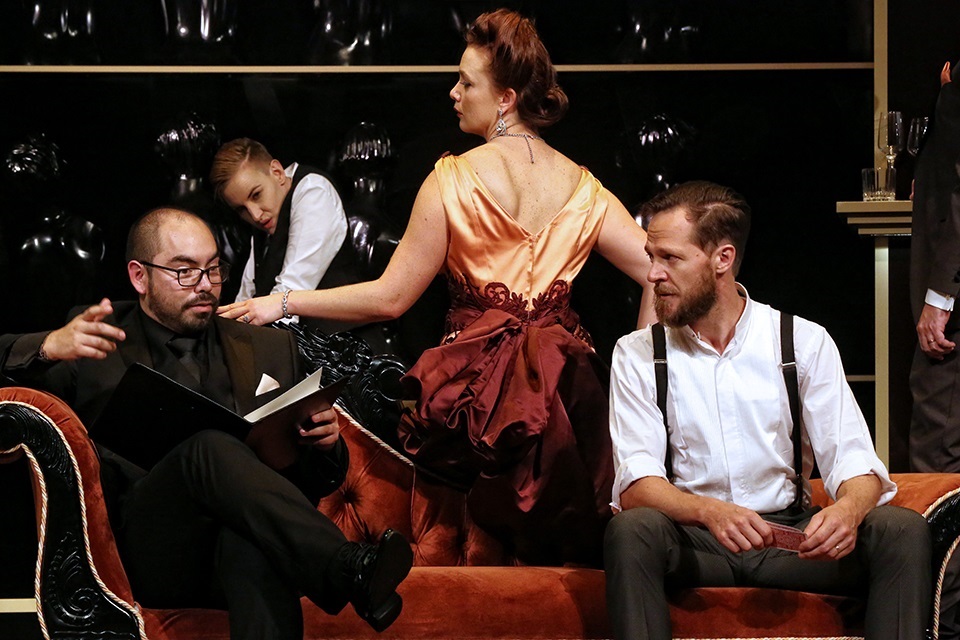 As with all Bell Shakespeare productions, the show points its finger at modern-day Australia and its wealth. Where suburbanites possess every accessory and the rich spend their days scheming and backstabbing in their lust for power. This is the ‘family’ scene here laid. And, like Australia’s super-rich, the characters are ruthless narcissists, whose defence of their position knows no human bounds.

Bell Shakespeare present their Richard as exemplar of other pathological world leaders — Pol Pot, Hitler, Kim Jong Il, Trump. With her crop of short blonde hair, it’s hard not to see Kate Mulvaney as the First World’s  leader, mired in plans which unravel. The murders and lies he instigates, combined with his manipulation of people, reveal him to be a creature from another realm.

A fabulous rendition and a thriller of a play, this is a once-in-a-era Richard III which has to be seen.

Disclosure: The Plus Ones paying were the guests of Bell Shakespeare and Emma Collison Publicity.
Image credit: Prudence Upton.

Meatstock: The Meat and Music Festival

Good Beer Week: The Plus Ones’ guide to the top craft beer events