Could you ever imagine seeing Shakespearean comedy in a school yard? To get ‘thee’ down to Siteworks, Brunswick, for such a thing in The Melbourne Shakespeare Company’s recent production The Comedy of Errors was the thing to do. Once there, we couldn’t believe our eyes.

We entered a quadrangle fronting a 1960s brick school building abutting an elegant gold boom era two-storied Victorian mansion. With an outstanding set design that wove its way across, above, around and throughout the space, this was just the beginning of the play’s immersive experience. Props were surrounding us, from trays of country vegetables, hanging fowl, lockable treasure chests, clothes hung aloft on clothes lines, over-sized handcuffs, and swords….it felt as lively and chaotic as a medieval faire. This suited the slapstick and street siting of many of the scenes. 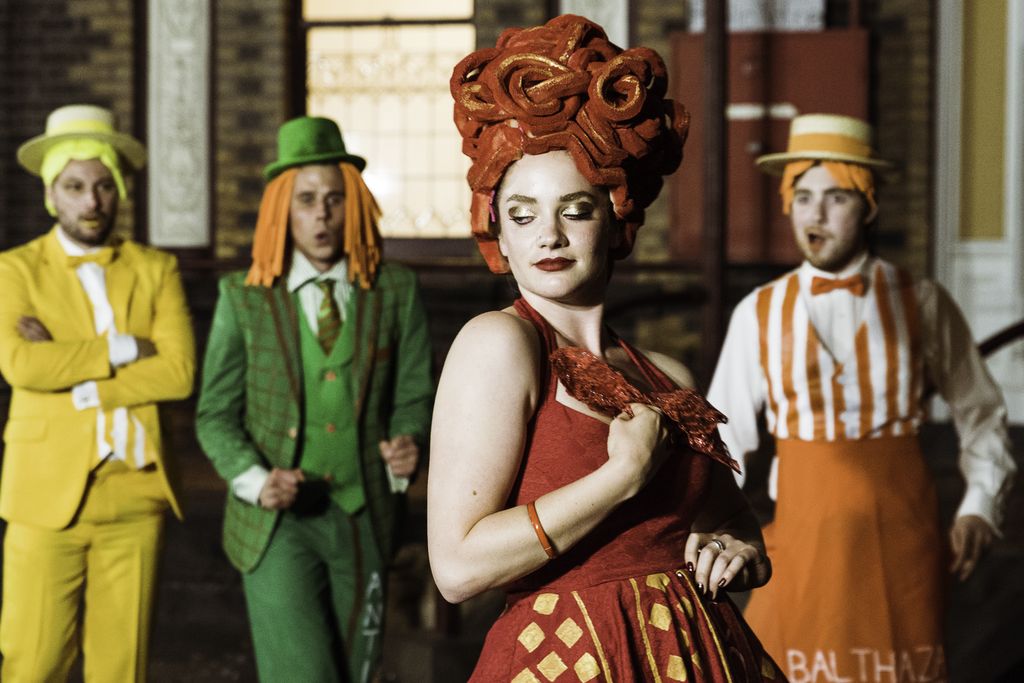 A play about two sets of twins mistaken for each other, and the comedy of errors which ensues from misunderstandings concerning fidelity, debt, relationships, and parenthood. The cast relished the fulsome flair and daring with which they were enabled to perform.

The set was majestic, resembling The Elizabethan Globe theatre itself with a two-storey balcony at its centre. The cast roved all over the space: the inner school yard quadrangles, corridors adorned with marketplace items, in and out of the grounds themselves. We could have been in downtown Sydney road itself, so madcap were the cast encountered!

Slamming doors, and balladeering on cast-iron balustrades, there was little about this open-ended space, that was not capitalised on by UK trained repertory stunner, director Jennifer Sarah Dean, and her cast of merry men and women. The line up
included the usual Shakespearean rabble: feuding husbands and wives, their lovers, courtesans, quack medicos, illegal money-lenders, sailors, Dukes, and one mighty Abess to rival The Sound Of Music’s. 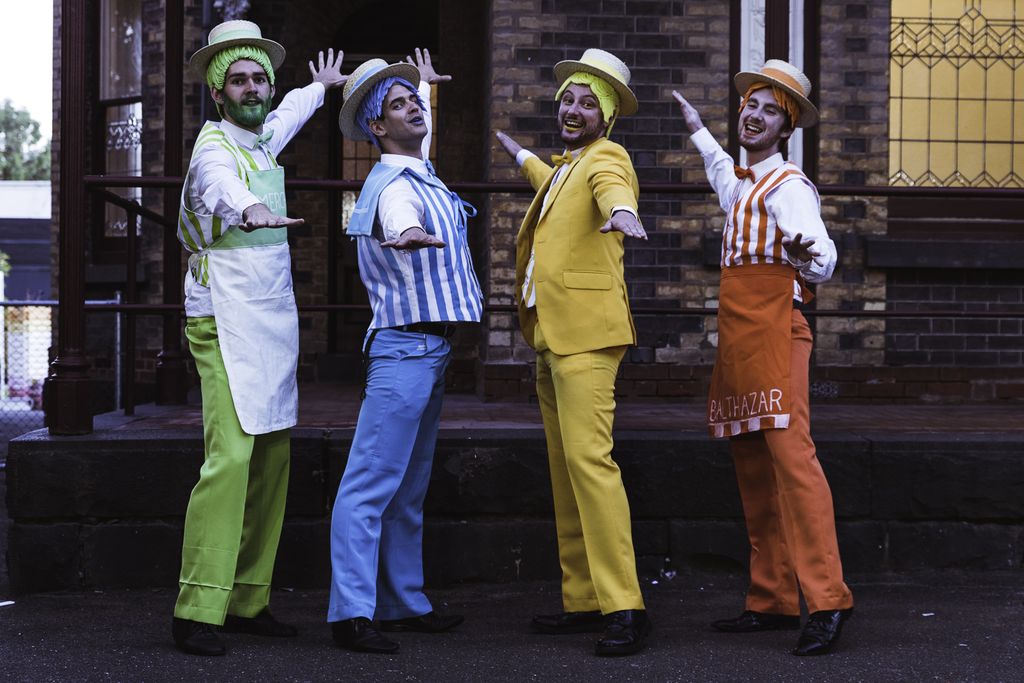 A four-man Barbershop quartet sang pop songs and musical numbers, commenting on the action and follies of each character, like a Greek chorus. They wore primary coloured pinstriped vests in lime green, bright yellow, baby blue and sickly orange. They were a living version of ABC TV’s ‘Q&A’s twitter feed that runs at the base of our screens – they said the unsayable with quirky commentary and spoke the inner thoughts of each character! After this show, all I can say is I want my own quartet to follow me and provide insight into my life and it’s pathetic missteps, moment-by-moment. This company have perfected making the old resonate newly, serving up Will’s work with verve, humour, and skill, making it cheekily relevant to today’s audiences.

The jewel in this show – aside from the excellent comic pantomime-like acting chops, reinvented pop songs, and marvellous 4-man barbershop quartet – is the near show-stealing marvel of Rhiannon Irving’s costumes and wigs. Nomination for a 2017 Green Room award must surely follow for her whimsical, comical bold colours, cartoonish accoutrement and plastic wigs made from recycled and found-object material (yoga matt, anyone?) in technicolours which had our eyes popping out of our heads and glued in fascination to the characters who appeared as if Manga puppets!!

-Sarah
Sarah W. is a dance-trained theatre lover with a flair for the bold and non-traditional performance platforms. On the street or in the box seat, she looks for quality works that push the envelope.

The Comedy Of Errors ran 25 March – 2 April, 7pm (90 minutes) at Siteworks, Brunswick. The venue was accessible.

Read The Plus Ones’ guide to MICF 2017, and visit often to see all our reviews.

Disclosure: The Plus Ones were invited guests of The Melbourne Shakespeare Company.
Image credit: Burke Photography.