I attended the cabaret show Rogue Romantic, starring Anya Anastasia, held at The Melba Spiegeltent. A portable venue, it certainly transports you to a different time.

My date and I entered this most extravagant of worlds lead on by the dulcet tones of Frank Sinatra, Dean Martin, Harry Belafonte and the like. Once seated, our gaze became transfixed on the most peculiar of sights. A lady, clearly Anya Anastasia, was laying on the piano completely still.

It seemed as if she were almost detached from reality, especially once she was surrounded by people cleaning.  It was hard to tell whether the cleaners were staff members or a quirk, because the theme remained throughout the act. (It turns out they are a part of the band.)

The show began, giving rise to many a feeling and emotion, cringe, amusement, bedazzlement, amongst others. Oh and of course, that of being entertained. Anya Anastasia’s dress was something of a marvel: a crimson vision, it sparkled, was cheekily sinful, and was perfectly equivalent to her stage ego. 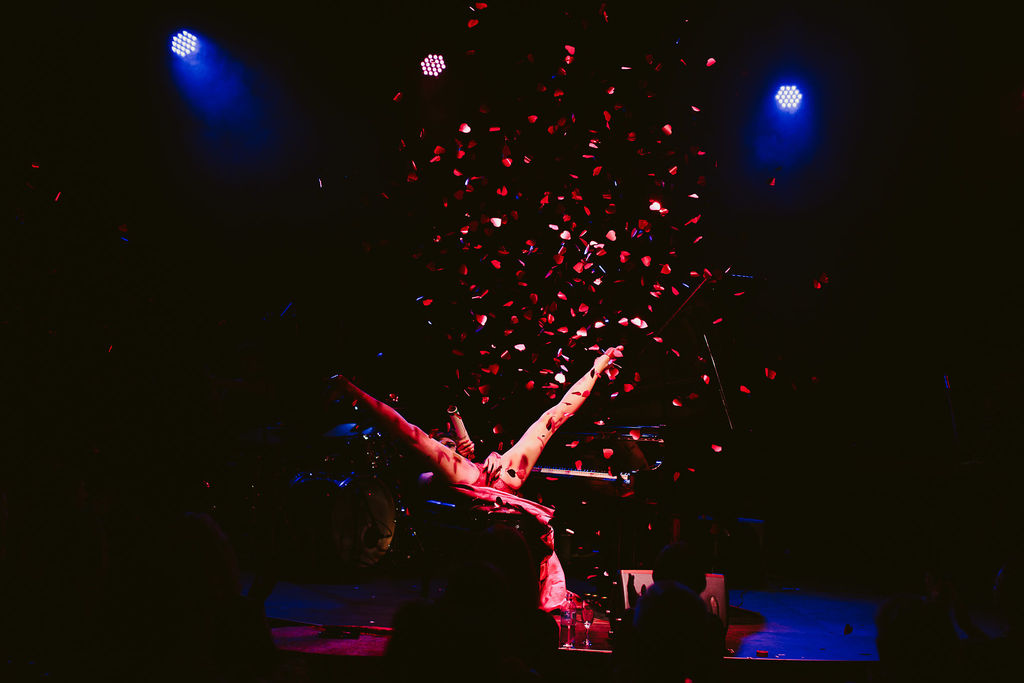 The journey was filled with hilariously uncomfortable moments, debauchery made into an art, and a flair for the unpredictable as you travelled through Anya’s crisis of risqué amours.

She portrayed a character so very sure in her delusion that all are in love with her no matter the moment (even the audience) and that life is surely always a party. This was brilliantly conveyed through her incredible vocal range, with trills you won’t hear anywhere else, and an amazingly talented band.  My personal favourite was the hilarious ‘Apocolypso.’

This was an experience I’d highly recommend to anyone in the mood for a bit of a naughty evening out. Rouge Romantic is hugely captivating, an absolute tour de force.

Given only a few shows remain in Melbourne before the show heads out internationally, you should head on down to Rogue Romantic!

Disclosure: The Plus Ones were invited guests of Zachary Exner.
Image credit: Anya Anastasia and Kate Pardey Photography.