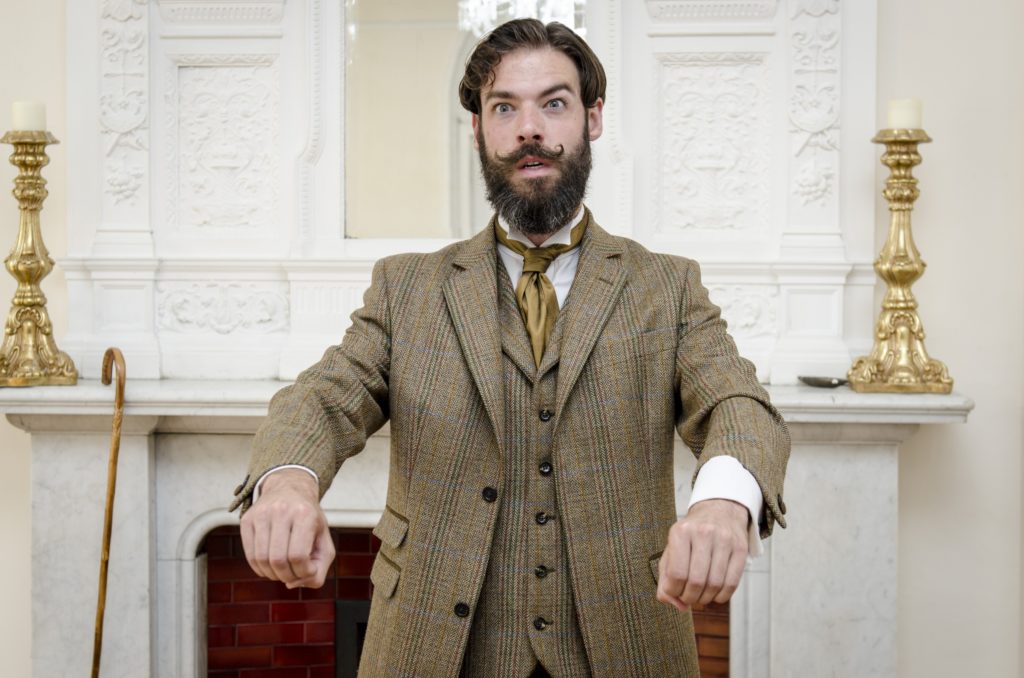 Early Grave, Fashionably Late is the closest experience I’ve had as a theatregoer to watching a (Victorian period) action blockbuster movie. To my plus one, it felt like reading a pulp Penny dreadful.  In combination, it manages to be at once cinematic and literary – quite the feat, as it all is the product of an hour with one stylish tweed-wearing man and a stage.

A brief overture of epic orchestral music, the very fashionably and slightly-late renowned explorer, cartographer, dandy, and magnificently moustached Bennett Cooper Sullivan introduces himself. A raconteur extraordinaire, he may stretch facts slightly of his adventures across the globe (flocks of majestic flying dodos?), but quickly settles into an account of the mysterious events of 1889 in Dublin.

It’s tale of murder, blackmail, politics, gambling, and much detecting. Sullivan recounts and reenacts feats of daring-do, seductions, pursuits on a penny farthing, cane fighting (he is an expert in the Vigny system of canne de combat), all while dodging creditors, assassins and the police. It’s all told with liberal insights into politics, European history, and characters of the time (including a memorable scene with Oscar Wilde and his mother).

Two elements combined elevate this one hour piece of storytelling to another level. The first: Irish actor Christopher Carroll never breaks character, and the suspension of disbelief is complete. Sullivan has elements of Sherlock Holmes and Indiana Jones, but is himself a fully-realised character. A man you get to know and connect to, with more depth than many an action hero on the silver screen. The second element is the writing. Top notch. It flows with wit and imagery that is up there with the best novels.

Now resident of Canberra, Christopher is in Melbourne for a scant few days showcasing his tremendous talents, before taking on Perth and Adelaide Fringe. ‘Early Grave, Fashionably Late’ is not to be missed.

Disclosure: The Plus Ones were invited guests of The Butterfly Club.
Image credit: Alexander JE Bradley.