I was introduced to Julia Jacklin in April 2015 as a support for Marlon Williams (the days when Melbourne could catch him playing at the Gaso rather than stadiums in America). I was enchanted, not only because I’m a sucker for alliteration and people who share my name, but by her smooth voice and her controlled vocals. They made me feel like I was standing on those rail tracks in O Brother Where Art Thou with Julia peacefully soundtracking me through my woes.

To a sold-out audience, Julia Jacklin walked onto Howler’s stage. She was costumed in her Kappa Sigma frat shirt worn on her album cover, cradled her Fender as lovingly as deserved, and instantaneously caused the audience’s left knee to give way to an uncontrollable yet gentle jig within the first chord progression. The night was complete with the songs from her debut album Don’t Let The Kids Win, a release which merits a tour through Australia, New Zealand, Europe, and the U.K.

Julia would open her eyes during each song, and as she glanced toward the end of the hall you could feel the conviction, as if maintaining eye contact with the old friend or past lover who instigated the need for the song to be written. 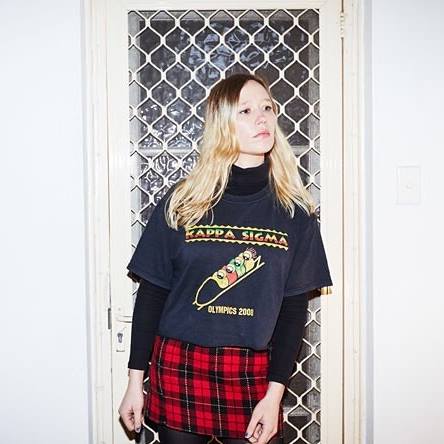 Watching her perform was like asking a poet what they’re passionate about. In between each piece she would grin to the carpeted stage, inevitably stained by beers before her, and nod to the audience as a modest and genuine thanks. I couldn’t help but feel delighted for her as she smiled to herself as the room filled with choral backing when the audience sang in unison ‘Oh I want to give you all of my love’ in the first chorus of ‘Pool Party’, an obvious favourite of the fans as well as Julia herself.

I’m normally a massive nerd when I go to live music events, standing amongst a crowded room, clutching my shoulders to avoid unnecessary shoulder grinds with strangers, and almost always closing my eyes. However, watching not only Julia, but each of her band members (Harry Fuller, Eddie Boyd, and Tom Stephens_ gracefully dance with their instruments was hypnotic. Flailing limbs and shoulder dips were professionally mastered.

As Julia Jacklin introduced her next song, an audible intake breath filled the room moments before she descended on the soft chords of ‘Leadlight’. Similarly, I watched as loyal fans pulled their partners closer as she began ‘LA Dream’. ‘Why did you go to the grocery store on the day you planned to leave?’ – the opening lines which seem simple but feel simple but far too familiar to a lot of us.

After a plea for an encore Julia returned on stage alone and shared a new ‘song [she] wrote in a post-Trump, post-Leonard Cohen depression’. Confusion and frustration with the world very rarely sounds this soothing. And it was on that note that Julia thanked everyone again, and gracefully walked off stage.

Julia tours Australia up until the beginning of February, and I highly suggest tracking down one of her gigs. Going to her show was like hanging out at an old friend’s intimate house party on a Sunday afternoon, where Julia (the host of party) is just very humbled that you’re enjoying the cakes she baked earlier on, she even baked some gluten free and vegan cupcakes, and I wouldn’t want you to miss out on those.

For more of Julia Jacklin’s music, and to check out her tour, visit www.juliajacklin.com.

Disclosure: The Plus Ones were invited guests of Mushroom Group.
Image credit: James Williams, Julia Jacklin.