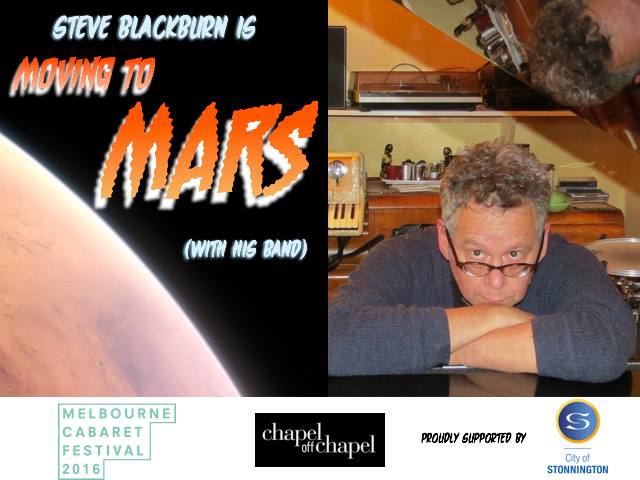 Moving to Mars at the 2016 Melbourne Cabaret Festival is an exercise in imagination. The audience is informed that we are to buckle-up and prepare for takeoff.  We are the select 1% picked to abandon Earth and embark on a one-way journey to the red planet. It will take nine months, and we have time to ponder what do we want to shed and leave behind from our previous lives. Stephen Blackburn, on piano and vocals, has answers which are not quite the ones that came to my mind, but he speaks sense.

Playing piano and on vocals, Steve heads a six-person ensemble band of Melbourne locals, and the hour we spend in their easy company is a thematic jazz concert.  Steve plays and sings his own compositions, which are a satirical social commentary on the absurdities of our lives on this planet.

He sings about weather, schadenfreude, piano-playing poodles on the internet, travelling to Thailand for nose jobs, mining billionaires. Stuff he doesn’t really care too much about.

It is all about the music. Steve composes some great tunes.  Looking around us, pretty much everyone in the audience was nodding, clapping or tapping their feet along to the music.  The jazzy tunes move from blues to Latin to country to eastern Europe inspired flavours.

There was a lot of spontaneous applause after an inspired guitar or accordion solo, or cries from fans in the audience requesting a particular song.  Steve and band have a devoted fan following, and it was easy to see why.

Moving to Mars runs 17-19 June 2016 at Chapel Off Chapel. Buy tickets now.
The venue is accessible.

Read our guide to the best acts of the 2016 Melbourne Cabaret Festival.

Disclosure: The Plus Ones were invited guests of Purple Media.
Photo credit: Moving to Mars.