A party where everyone is dressed in white and silver and no one can talk. Yes, a silent party. Entitled ‘All We Cannot Say: A Voiceless Affair’, it’s the latest immersive theatrical experience from The Boon Companions. It surpassed all my expectations. 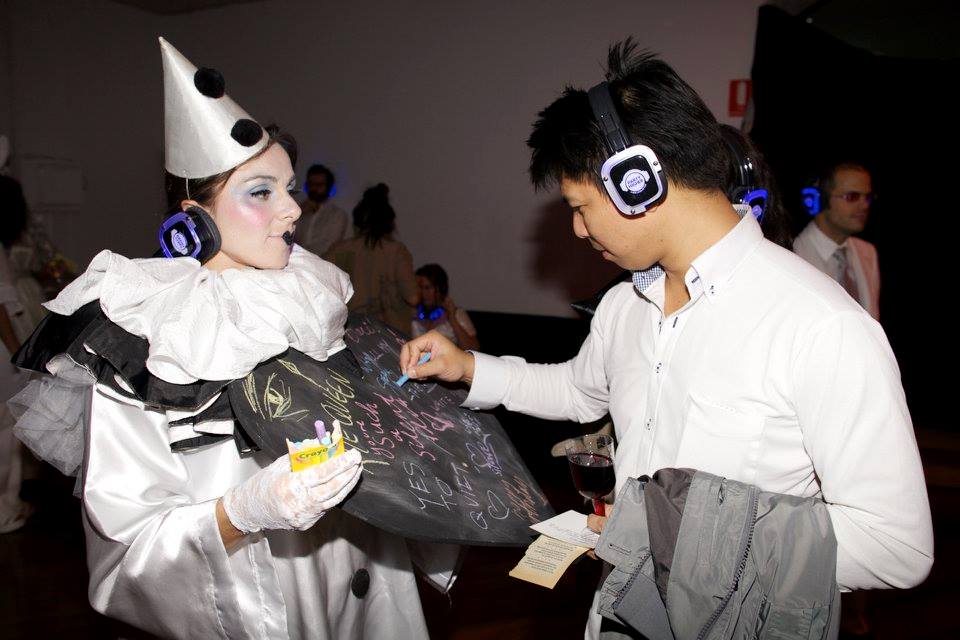 A sign greeted us in the stairwell of The Space Arts & Dance Centre in Prahran: ‘Hey You! No Talking’. How would I survive three hours without speech? We were ushered into a dark room and silently asked to sign an oath promising we wouldn’t use our vocal cords for the next three hours. We were then handed pencils and pads of paper (whew).

Then the stroke of genius arrived: we put on Silent Disco headphones. This was the absolute perfect solution to what could have been a night of listening to people coughing and the sound of shoes walking on floors. Different rooms had different frequencies you could set your headphones to, resulting in a blue/red/green lighting up on your headphones. Whether you were doing a dance class or a life drawing session (with a clothed model, mind), there was something fantastic to listen to. Props to the Boon Companions for the elegant solution. 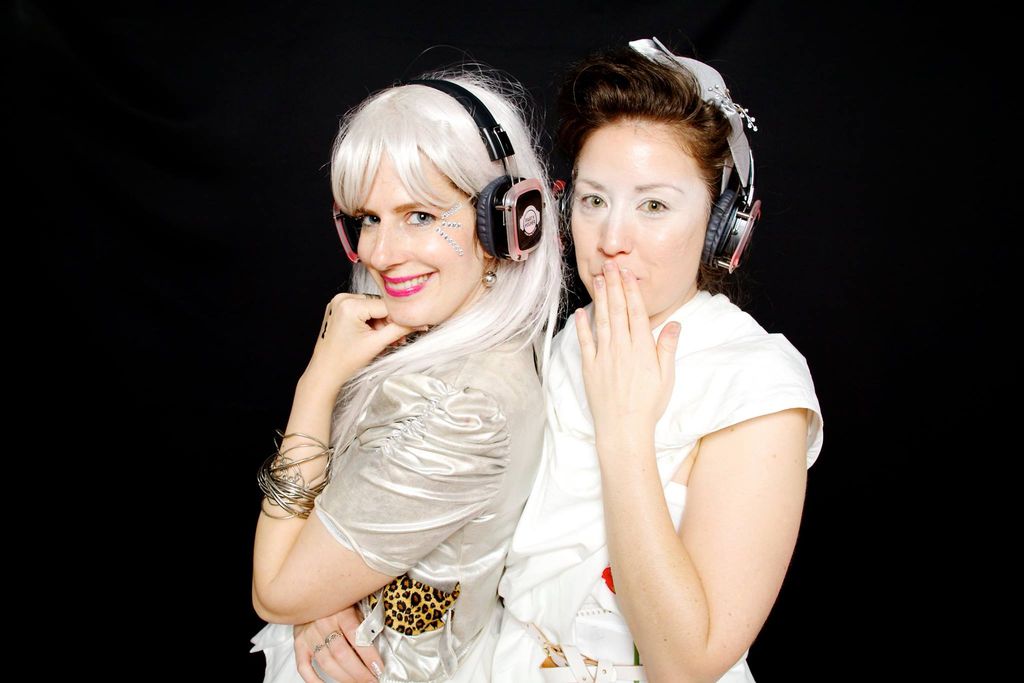 Music in ears, guests in silver and white costumes, rooms to explore. The problem and the joy of ‘A Voiceless Affair’ was that there was so much going on at any one time it was impossible to explore all of it. But for the same reason, each person’s experience was different.

It was amazing how much you could communicate without words. I gestured a compliment to a girl about her be-jeweled moustache; she offered to glue silver beads on my cheek. I reciprocated with an impromptu manicure with silver nail polish I had in my bag. Our interaction transcended speech and used only gestures.

One of my highlights included a man telling jokes with the aid of a whiteboard. My friend and I sat on either side as he erased words in a joke and let us fill in our own, ending with a rousing punchline. 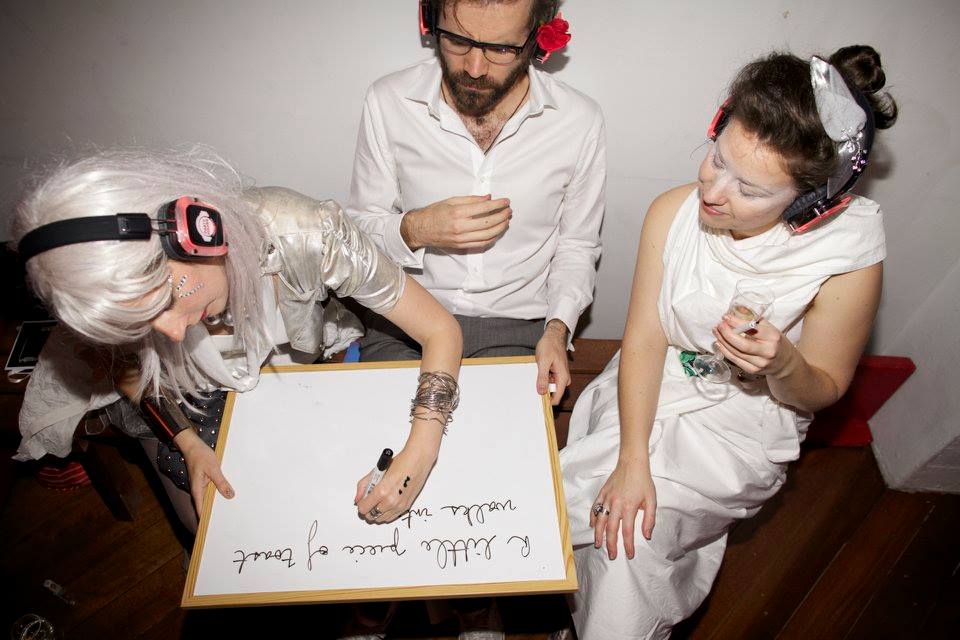 Then there was the most magical experience of all. A man walked up to me and held out his hand. ‘Come With Me?’ was painted on it. I smiled, nodded, took his other hand. He led me through a rabbit warren of rooms before plugging me into his own headphones. Soothing music played and a woman’s voice started speaking. I was blindfolded, pushed my way through curtains, and was sat on a cushion. The voice related how I was undergoing a cleaning ritual as I was startled to find two hands stroking my bare arms. Soon the voice asked me to remove the blindfold. I stared at the second person, a veiled woman who eventually lifted her veil and gazed into my eyes.

After a few minutes, the first man helped me depart — but not before painting three black dots on my hand. For the rest of the party, I could look for hands with black dots and exchange glances with the others who’d undergone the ritual. They understood we were now part of a secret society. 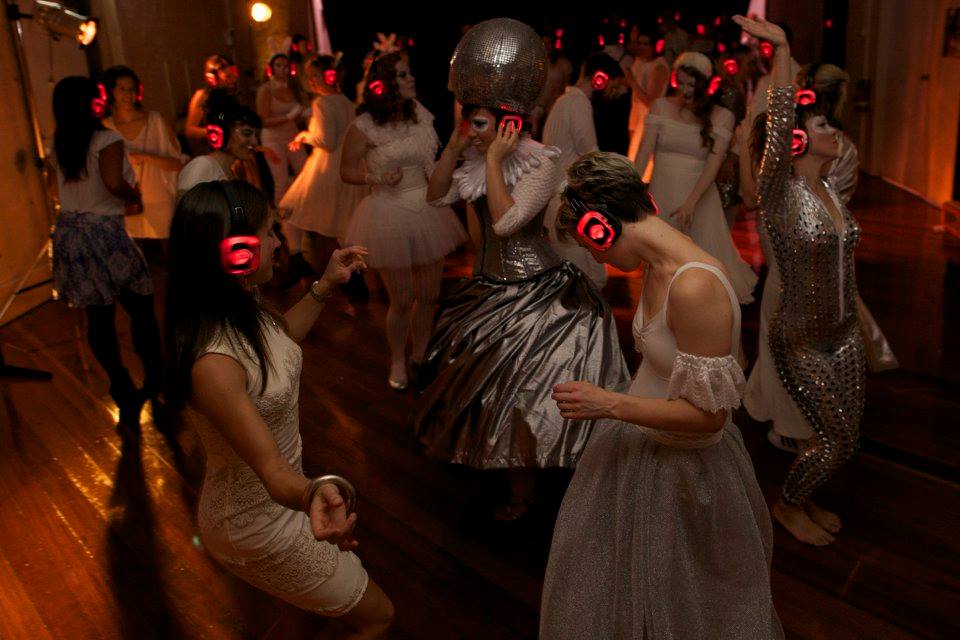 That’s what the entire evening felt like: a magical world that no one would understand unless they’d been. How to explain what it was like to see a rock band in leotards give a silent performance? Or that moment when you removed your headphones to watch everyone dance, hearing only the scuffing and stomping of feet on wooden floors? It’s magical. It’s never to be repeated. It’s something you have to experience for yourself. If you don’t head to the next Boon Companions party, you’ll forever regret it.

– Theresa
Co-founder of The Plus Ones, Theresa will be channelling her inner Katharine Hepburn at the next Boon Companions’ theatrical interlude.

Follow The Boon Companions on Facebook and Instagram. Book tickets for their next event on June 18th as part of the Emerging Writers’ Festival. Its theme: literary stars from the 1920s and 30s.

Disclosure: The Plus Ones were invited guests of Riot House Publicity.
Photo credit: Jonathan White.