‘The Glass Menagerie‘ is one of those plays that make you endlessly proud of Australian theatre’s ability to interpret texts in new and interesting ways. I’ll admit to being a sub par theatre nerd – I have never seen or read a Tennesee Williams play before, to the dismay of the enthusiasts I spoke to during interval.

The Malthouse was packed for the opening night of ‘The Glass Menagerie’, and from the very beginning we knew this was not your traditional stand and deliver performance. Luke Mullins (playing Williams’ self-based character) meanders through the audience, bringing us to silence until the roar of chatter rises again and he cuts us all off with the opening lines, spoken as omniscient narrator rather than scripted character.

Williams is a wonderful writer and his characters tie themselves to your hearts a little bit while also making you dislike them, especially when acted so beautifully by the cast. 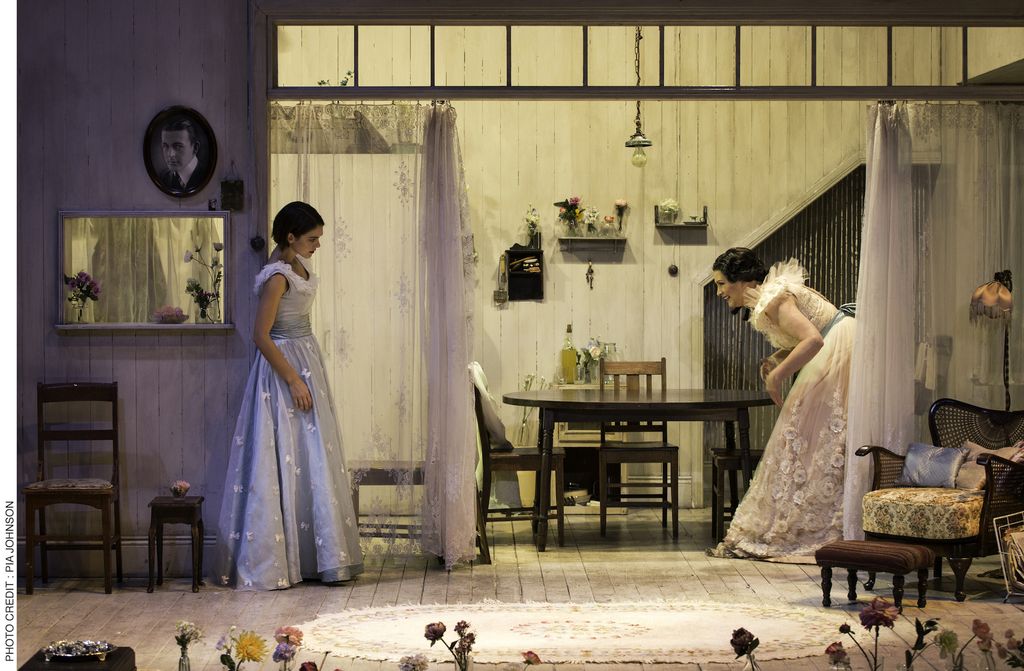 A small four actor production, ‘The Glass Menagerie’ stars recent WAAPA graduate Rose Riley, Harry Greenwood, and Helpmann award winners Pamela Rabe and Luke Mullins. Each have clearly inhabited their roles: Mullins playing the internal conflicts of Tom, Rabe dancing between drama and comedy in a flawless performance. Newcomer Rose Riley has the presence of someone who’s been on stage for a lifetime, with delivery that absorbed everyone’s attention – it’s impossible to look away from her.

This production was like none I’ve ever seen – a cross between live theatre and early 20th century cinema, with cameras stationed around the stage showing close-up details of scenes, offering different perspectives, and adding depth to the smallest actions the actors have made part of their performance. It had me reminiscing to my VCE literature days of mis-en-scene.

The subject matter is vast. Family dynamics, gender roles and expectations, disability, heartbreak, sexuality and a feeling of claustrophobia and entrapment are illustrated in the beautifully built set of a small apartment. Director Eamon Flack has written up a beautiful accompanying piece about the tragic backstory of the play and everything Williams was trying to accomplish with it.

A night spent at the Malthouse during the run of ‘The Glass Menagerie’ is something you’ll never regret.

-Jasmin Ashton
Jasmin Ashton is a PR whiz and freelance writer/designer from Melbourne who has a lot of feelings about pretty much everything. Find them at @Jasmanna.

Disclosure: The Plus Ones were invited guests of The Malthouse.
Photo credit: Pia Johnson, Malthouse Theatre, Belvoir.