Opera Australia’s new production of The Pearlfishers is guaranteed to satisfy audiences with its striking performances, memorable music, and alluring backdrop.

It’s a story of love, loyalty, and deception, set on the colonial coast of Ceylon (now Sri Lanka) in the 1860s, when British colonial presence was at its height.

Most people are familiar with the composer Georges Bizet because of Carmen, whose enormous success was possibly responsible for the revival of The Pearlfishers.

This tale revolves around the friendship between Zurga, the local pearl dealer, and his long lost friend, Nadir. A long time ago, they fell out over a goddess-like woman; but now reunited, they swear to never again allow anything to come between them. Everything goes well until a mysterious woman arrives. She turns out to be Léïla, the beauty who drove them apart long ago. It becomes a test of friendship, as their rivalry and jealousy are reignited. 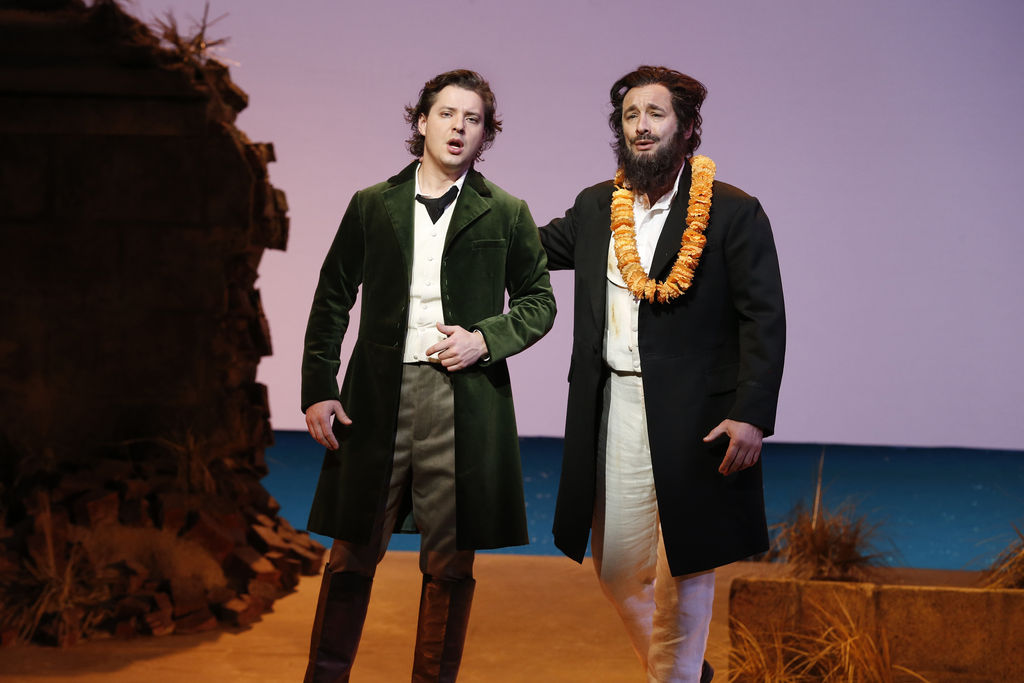 Bizet was given a much-flawed libretto to put to music, but Michael Gow’s new approach to the characters (making the three male principals European) works wonderfully. He creates strong characters with more defined motivations, which helps champion the musical talents of the eager, young composer.

Dmitry Korchak is outstanding as Nadir, and Emma Matthews (our own Australian songbird) does not disappoint as Léïla, with immaculate vibratos and a marvellous, expressive performance. They’re accompanied by the consistently brilliant playing of Orchestra Victoria and sensational choruses that shake the chattels.

At times the costumes of the chorus seem plain and anachronistic, but these are trumped by evocative sets that help you escape to Sri Lanka’s exotic past, and superb lighting that completes the atmosphere of a moody dusk, an ominous storm, and fires blazing.

There are a number of beautiful numbers in this opera, but the magnificent duet between Zurga and Nadir, Au fond du temple saint (‘At the back of the holy temple’), will take your breath away. Scores of people were humming the melody as they left the auditorium, as was I.

Opera is a unique form of storytelling and entertainment, and Opera Australia’s thoughtful production of The Pearlfishers is a wonderful example of this visual, auditory and emotional experience. Don’t miss out.

‘The Pearlfishers’ runs 7–28 May 2016 at the State Theatre, Melbourne (sung in French with English surtitles). Visit the Opera Australia website to book tickets. The venue is wheelchair accessible.

Immersive fitness: The exercise movement of the future?

A night of splashing and movie-going with Hot Tub Cinema