Hot tub. Cinema. Both are already spectacular past times singularly, but when put together they become something truly other worldly.

This other world launched at The Common Man on Dukes Walk in South Wharf, fittingly set alongside the river. From the very beginning details such as the super informative staff and complimentary water bottles with colourful flashing lights inside gave the experience that little something extra.

The night of the launch was very un-Melbourne like as it heavily poured down for several hours. However, this only added to the experience as I sat in 40-degree bubbly warmth while watching the rainfall all around the large, protective marquee.

Of course the highlight of the night was the on-call waiter who delivered a delicious selection of cocktails (I recommend the mojito), wine and beer. Said waiter also took orders for dinner and snacks which were delivered during intermission, when cinemagoers were encouraged to get out of the tub for a dance and snap some mandatory selfies. 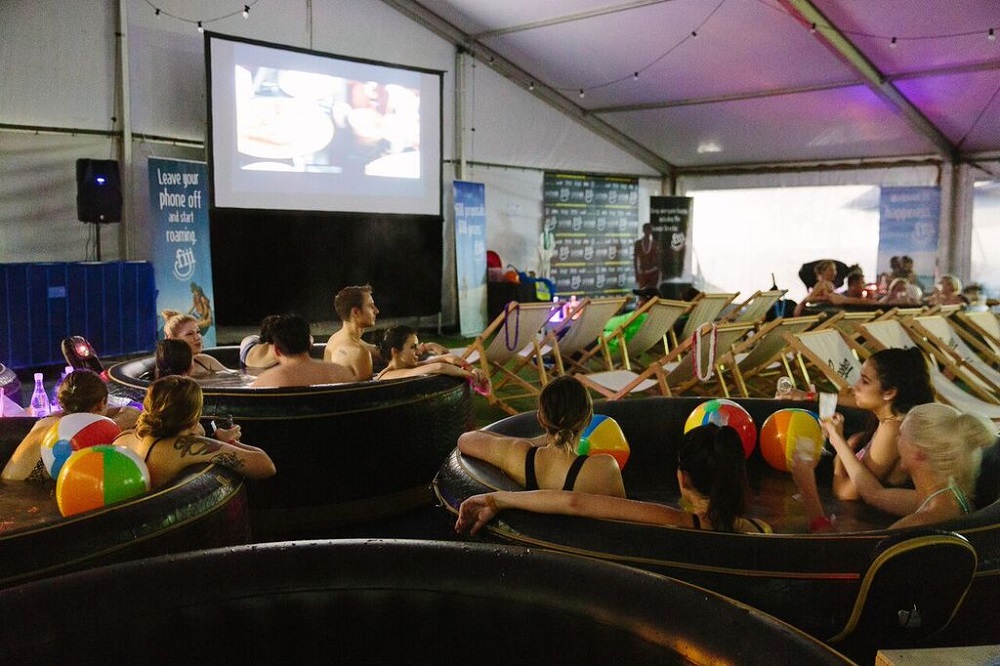 Though ‘dry’ seats had a better view from being in between the two screens, I would definitely suggest a ‘wet’ ticket in the ten tubs that are lined along the walls.

While I RITLed (rolling in tub laughing) at Will Ferrell’s Talladega Nights, there’s a diverse choice of classics and relatively new releases over the next six weeks. I’ll be returning to see Labyrinth and Blue Streak.

Hot Tub Cinema is perfect for an out of the box date night idea, birthday party, or if you just feel like hanging out in a hot tub on a chilly autumn night.

The overseas success of the idea in both London and New York means that it’s likely to sell out fast, so hire out a whole tub for your mates or get to know other tub goers by buying tickets. Don’t forget to take a towel!

-Ruby
Ruby Brown is a freelance writer who will gulp at any excuse to drink cider and explore the delights of Melbourne’s north, only venturing outside the bubble for something truly spectacular.

Hot Tub Cinema runs from April 21 – May 29 and is an 18+ only event. Purchase tickets.
The venue is accessible.

Disclosure: The Plus Ones were invited guests of Splash Out Hire.
Image credit: Hot Tub Cinema.