Heartstring proudly presents one of Shakespeare’s final tragedies, ‘Coriolanus‘ – a bloody tale of pride and power amongst men, performed by an all-female cast.

Famine has struck the city of Rome. Plebians angrily march in protest against the aristocracy who are restricting their supply of grain. Meanwhile, Roman soldier Caius Martius (Elisa Armstrong), who seethes with disdain against the common people, is summoned to wage war against the Volscians who are threatening the borders of Rome. Following her victory, Martius is renamed Corialanus; but winning a war against the enemy does not easily win the hearts of her people.

Heartstring breathes new life into a classic tale that would have originally been performed by an all-male cast – not only because it is one of Shakespeare’s most masculine plays, but because during Shakespeare’s time all roles were traditionally performed by males.  With the abundance of talented female actresses, Heartstring aims to address the shortage of female roles with their inaugural all-female performance, promising to cast at least fifty percent of its roles to women in all future productions. 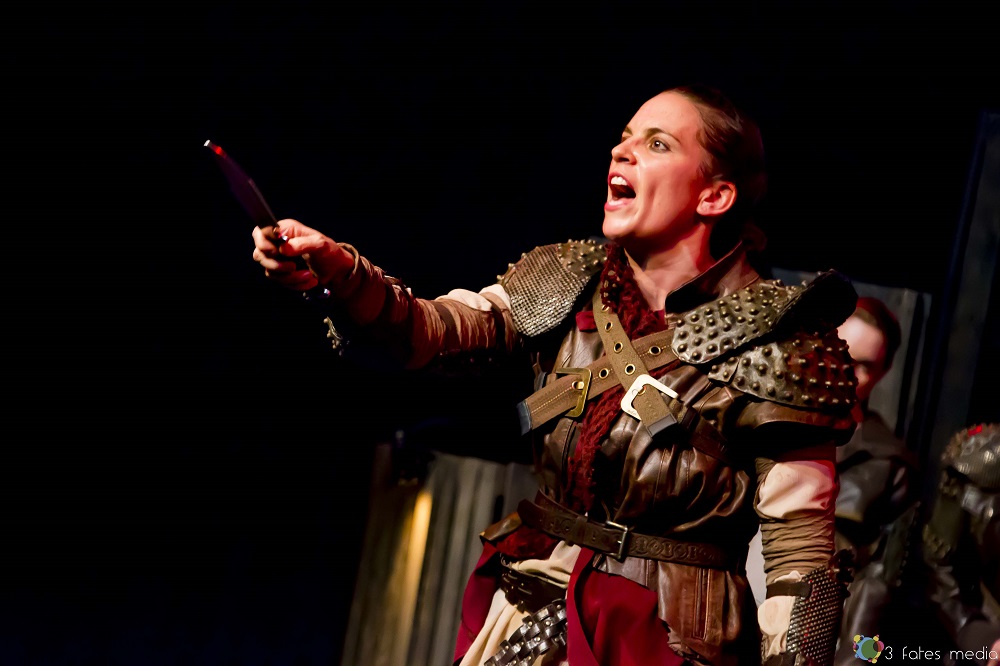 Although ‘Coriolanus’ is not the most widely known nor the most popular of Shakespeare’s plays, Heartstring’s production is poignantly memorable and deeply moving. Elisa Armstrong charges the stage as Coriolanus with brute force, owning the entirety of her proud and disastrously stubborn character. Sonia Marcon’s performance of Coriolanus’ loathed conspirator, Sicinius, is enthralling and relentless. Menenius, brilliantly played by Catherine Glavicic, infuses the play with wit and vitality as she defends Coriolanus against the plotting tribunes and raging Plebs.

We journey through a vast landscape of conflicting emotions and are torn apart by pride, love, loyalty, and loss. We unmercifully face what it means to suffer for being who you are and what you believe. The actors skillfully embody their characters and we realize by the end that this is neither about being a man nor a woman, but about being human.

It’s not everyday we get to experience a formidable Shakespearean performance delivered by an entirely female – though more notably, entirely outstanding – cast. ‘Coriolanus’ is your chance.

– Hannah
Hannah is a secondary school English teacher and Shakespeare enthusiast. Coriolanus wasn’t her favorite play of all time, but it is now.

Heartstring’s ‘Coriolanus’ runs at Metanoia Theatre at the Mechanics Institute in Brunswick from 27 April to 8 May 2016. Book tickets. The venue is accessible.

Disclosure: The Plus Ones were invited guests of Sassy Red PR.
Photo credit: 3 Fates Media.

Human Rights Arts and Film Festival 2016 – The Plus Ones’ guide