Somewhere in my mother’s shed is a notebook from my teenage self that has ‘Danny Bhoy’ surrounded by love hearts. Yep. And I knew his DVDs line for line. If you know me in real life I’ve almost definitely quoted Danny Bhoy at you without you realising, and you thought I was extra funny and charming.

Now that we’ve clarified all of that, you can imagine my excitement to be seeing him in his first time on Australian soil for three long years – back with his new show ‘Please Untick This Box’.

Rule number one of a comedy show: don’t be late. Don’t. Especially if you’ve paid extra for seats in the front row.

Two attendees missed this memo, and the first few minutes of the show which were entirely made of speculation about where the heck they could be before they sheepishly made the long walk of shame to their seats… and then after some conversation Danny sent one out to go to the bathroom.

Danny’s banter is something special – there’s not a lot of comedians who actually get hecklers to repeat themselves multiple times to try and understand what was actually said. He talked to multiple people in the front row (all men, which I raised an eyebrow at), and located the fellow Scots in the crowd for a little banter about the historic referendum of 2014 (“I’m not telling you which way I voted, but we lost”).

Danny Bhoy’s brain must be a hectic place to live – his stream of consciousness style of comedy means the audience is along for the journey through seagull impersonations, his religious past, some semi-gross Clinton sex jokes, and a surprisingly accurate Trump face. There was a long aside about the pretentious and arrogant nature of people with fancy fake stage names. It took me a few seconds to remember that it was actually Danni Chaudhry standing on stage in front of us all.

One note to Danny: there’s a reason six-year-olds don’t get circumcised, and it’s kinda cruel… especially when your parents pretend you’re going to hospital to visit your sick grandma. That section feels more like Danny laughing his way through a traumatic childhood experience than actual stand up comedy. 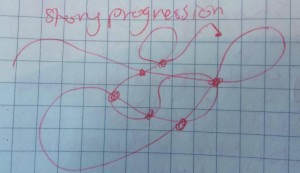 I drew a picture representation of the many tangents travelled along as asides from main stories – Danny’s constant calls of ‘where was I’ meant the audience felt like we were contributing to the show, without heckling.

I’ve ticked something off my bucket list this week, hysterically laughing for a solid hour and a half (we went overtime which was Extra Value Comedy!) at one of the greatest comedians I’ve ever seen live.

– Jasmin Ashton
Jasmin Ashton is a PR whiz and freelance writer/designer from Melbourne who has a lot of feelings about pretty much everything. Find them at @Jasmanna.

‘Please Untick This Box‘ runs til 9 April at Hamer Hall. The venue is wheelchair accessible.

Check out our guide to the Melbourne International Comedy Festival for more great shows.

Disclosure: The Plus Ones were invited guests of Diana O’Neill.