Musical lovers of Melbourne, your prayers have been answered! Originally premiered Off-Broadway in 1997 and re-opened on Broadway in 2014, the feisty musical ‘Violet’ is now in Australia and has swept up some of the most significant awards at Sydney Theatre Awards early this year. The south-side’s hub of high quality arts, Chapel off Chapel, is the blessed place to praise the Lord for a well-crafted musical and a theatrical hallelujah! 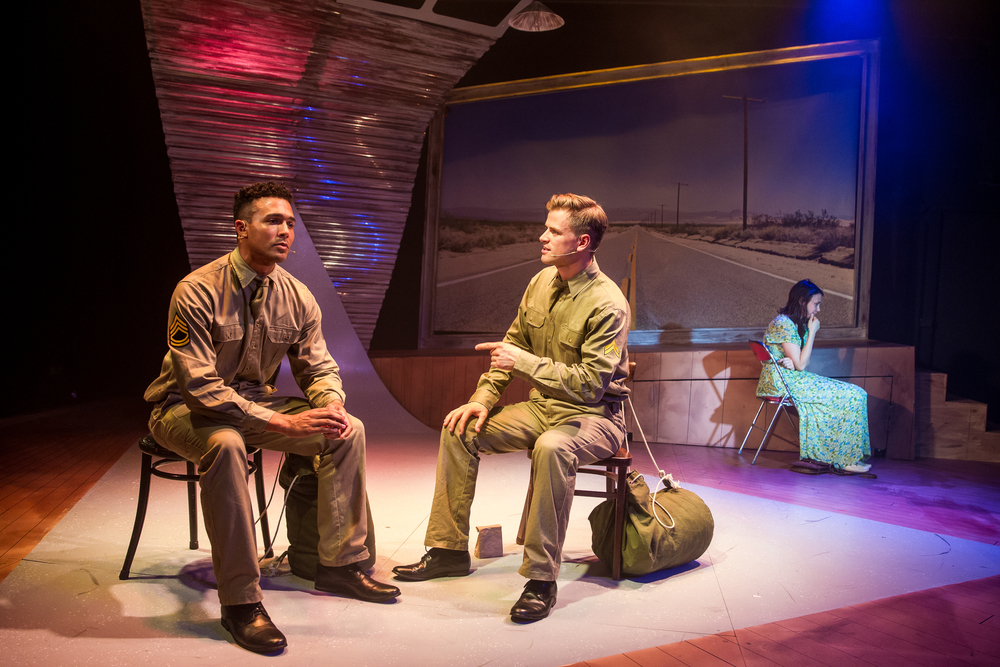 Based on Doris Betts’ short story The Ugliest Pilgrim, ‘Violet’ is the story of a young woman coming to terms with a twist of fate. The high-spirited, graceful Violet is disfigured by an accident she had as a teenager. Her otherwise beautiful face carries a defining scar, which propels her to embark on a journey from her small town in North Carolina to Oklahoma, to ask for physical help from a famous TV evangelist. Along the way, she crosses her path of two soldiers – flirtatious, exuberant and slick Monty and the sensitive, placid and humble Flick. What starts as a casual friendship between the three, evolves to a love triangle. Overwhelmed by the male attention that she hadn’t had so far, Violet will only find out that the hyped healer she’s been after was just a charlatan and the beauty that she was pursuing was much more closer to her then she thought.

Don’t you roll your eyes yet. The plot of the story may sound like a cliché, but the relationship dynamics between Violet and the soldiers are profound, intriguing and entertaining, and capture your attention instantly. The acting skills, stage presence and aura of each and every performer on the stage are fabulous. Their effervescent and heart-warming performance put a huge smile on our faces that kept hanging there even after the show was finished, among the fashionably-hammered people of Chapel Street on a Friday night.

All the believers and the agnostics out there: Cross the river and make your way down to Chapel off Chapel for a sterling performance and perhaps to discover a thing or two about yourselves.

‘Violet’ runs 3-20 March at Chapel off Chapel. The venue is accessible.

Disclosure: The Plus Ones were invited guests of Chapel Off Chapel.
Photos via ‘Violet’.

‘Eleanor’s Story’ at Chapel Off Chapel