I hit my peak life moment at the Melbourne Food and Wine Festival event ‘Truly, Madly, Deeply’. There I was, holding a champagne flute. Above me was a beautiful acrobat entwined onto a hoop suspended from the ceiling. As I raised my glass, she poured a waterfall of champagne into it. Top life moment: unlocked.

This was just one of the magical moments at ‘Truly, Madly, Deeply’, the brainchild of PR company Zilla & Brook. It was held at the Plaza Ballroom, one level beneath the Regent Theatre on Collins Street.

It was my first time there, and my eyes nearly bugged out of my head as I descended the staircase. The building was carved out in 1929, and has to be seen to be believed. Underground fireplaces, Romanesque statues — it’s beyond compare. Upon entering the main bar area, everyone’s gazes were immediately drawn to the aforementioned champagne acrobats. With one suspended on each side of the room, party-goers could get their glasses filled as they grazed on canapes and tried not to ruin their appetites for the main course.

Behold! The huge curtains were drawn back and the main ballroom was revealed — including a spectacular birds nest-type piece of artwork from Flower Temple, hovering over one of the long rows of tables. TPO co-founder Rukmal and I found our way to our seats and were instantly topped up with what would be one of many glasses of delicious Punt Road wines that evening. 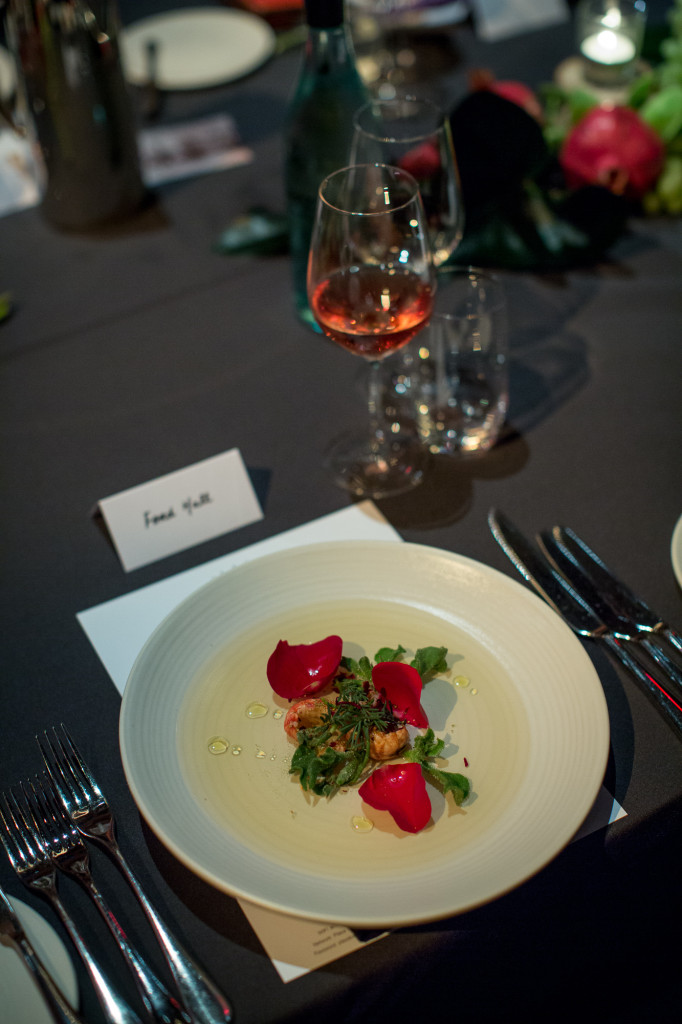 The four courses could have been entertainment enough, what with deciphering the fanciness of the menu and commenting on the beauty of each dish. But as part of the ‘Madly’ in the title, the organisers kept us on our toes. Punt Road’s head winemaker introduced each wine, explaining its history. Then there was the main event: head bartender of Boilermaker House, Jack Sotti, went head-to-head with Eau de Vie‘s Oscar Eastman in an Iron Chef-style competition. Each bartender’s creativity was stretched to the limit as he concocted cocktails out of random ingredients (like grapes). We lucky guests were able to try both of them.

We were unexpectedly seated next to good friends, which made the night that much better. So much so that, in true Plus Ones style, we were some of the last to leave at 11pm. Yes, on a Wednesday. But do you blame us? The deep underground Plaza Ballroom truly made us mad — in the best way possible.

-Theresa
Co-founder of The Plus Ones, Theresa loves knowing that no matter how long she lives in Melbourne, there are always more things to experience.

The Plaza Ballroom can be found at 191 Collins Street, Melbourne.

‘Breaking the Cage’ at The Owl and Cat

‘Eleanor’s Story’ at Chapel Off Chapel