The leaves are starting to turn; Daylight Savings will soon be over. There are very few things that make up for the end of summer. One of them is the new autumnal menu at Nieuw Amsterdam.

If summertime is all about rooftop bars and picnics in the park, then autumn encourages lingering over dinner inside cosy restaurants. TPO’s co-founder Rukmal and I were delighted when we were invited to a special preview of their new menu. I’ve been a fan of Nieuw (we’re on a one-name basis now) ever since I discovered their cool subterranean bar. 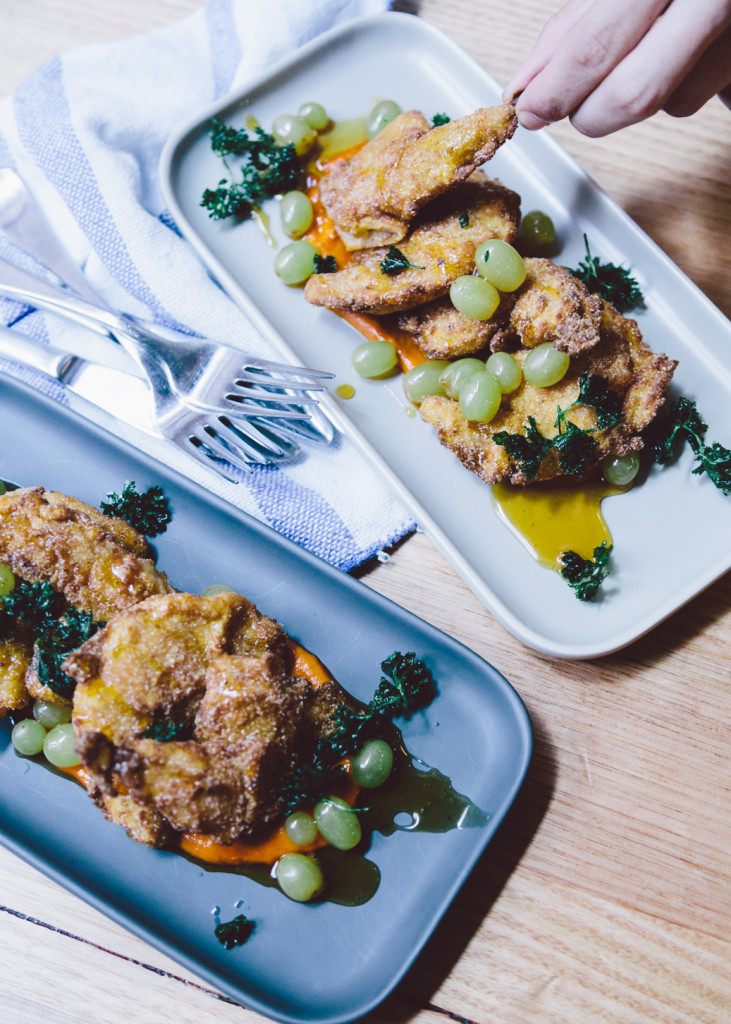 Our evening began there, where their master bartender whipped us up a cocktail of our choice. Manager Renee recommended taking a look at their ‘Spritz’d’ page of libations. I bravely ordered the Lad-a-mere Poitín (put-cheen). Who knew an Irish whiskey-style liquor mixed with Applejack could be so refreshing? The soda-topped beverage was exactly what I needed before tucking into what would turn out to be nine different dishes off the new menu.

Nieuw Amsterdam is known for their American-style food. Being a Yank myself, I went ga-ga over their bar snacks: fried pickles dipped in Ranch dressing. Ranch you’d think came straight off a plane from the U.S. (except better). Then it was upstairs to a long table tucked off the spacious main room, all brick and wood decor. 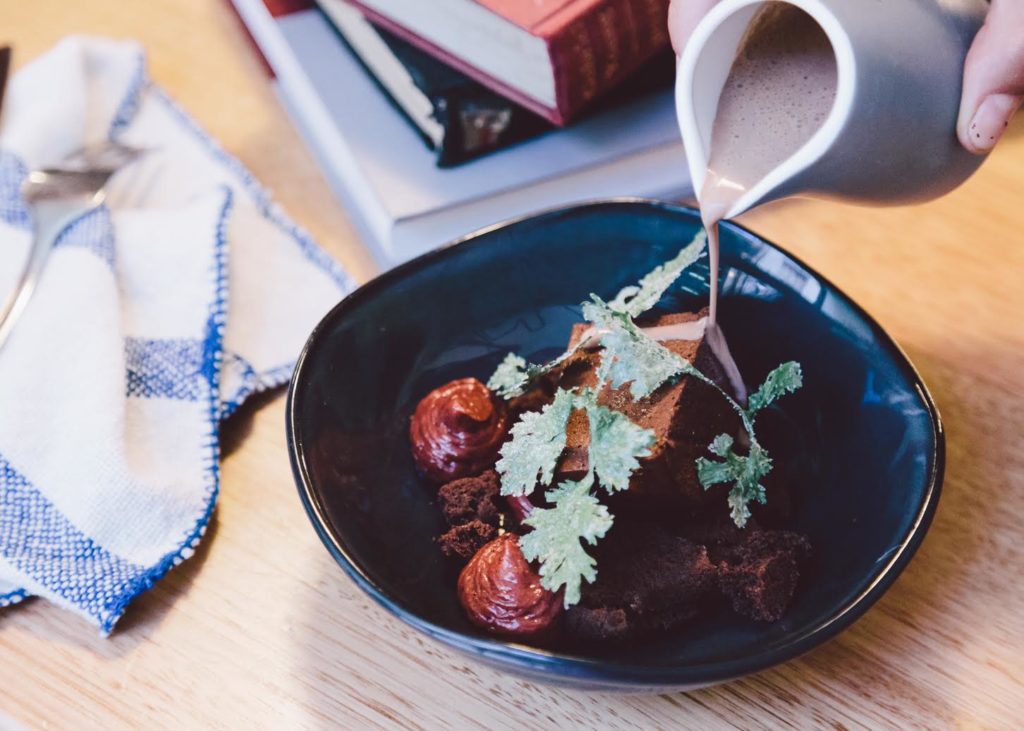 Before I regale you with each dish and how delectable they all were (trust me, each and every one had me crying tears of joy), I need to start off by saying what a pleasure it is to see how much thought went into the menu. Nieuw Amsterdam’s chef Jeff Trotter and venue manager Laura Thomasson are bursting with stories on how they came up with each dish. Inspired by everything from traditional pickling techniques to a New Orleans ex-boyfriend, they told us stories about all the food. I learned so much about my homeland and its culinary history.

Out of the new menu’s starters, we devoured the Southern Fried Quail. Served with pickled grapes, the flavours and textures mingled perfectly. the Mac’n’Cheese Waffle wasn’t quite was I expected (it’s not a croquette, but an actual waffle), topped with bacon jam and Cheez Whiz. The gourmet kind, not the orange stuff out of a can. The French Toast came topped with goats curd, tomato jam, and black olive candy (!). 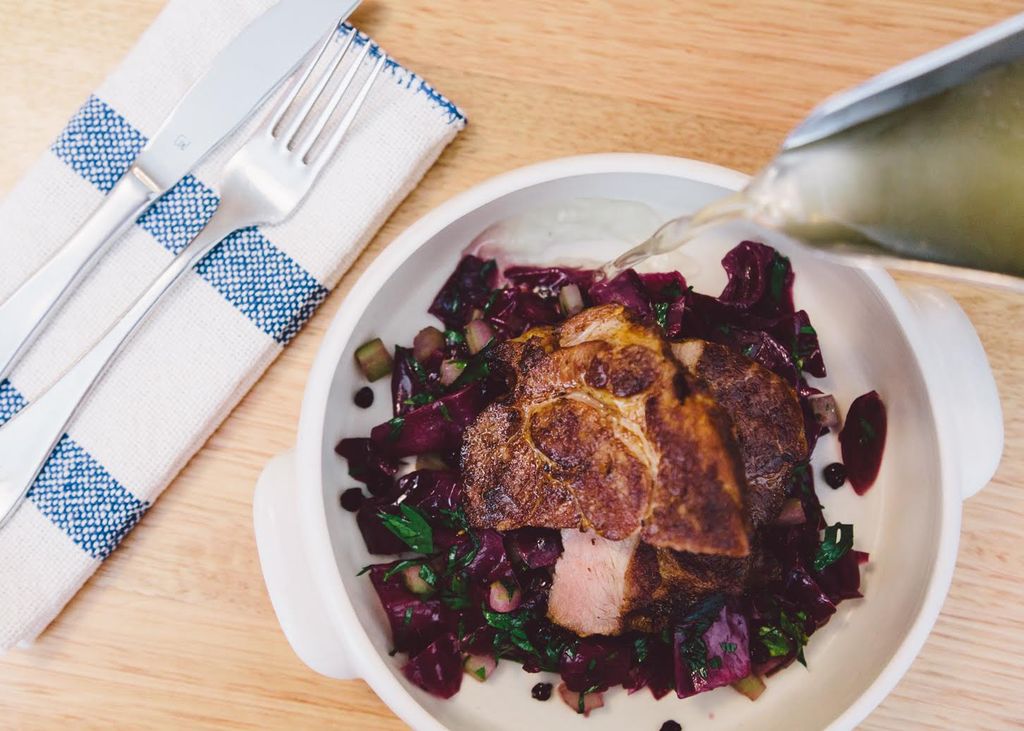 We tried three of the mains, all perfect for the carnivore in your life. The Spiced Lamb Ribs took inspiration from Middle Eastern/Mediterranean immigration to the U.S., paired with curry. Beef Brisket was just about the most perfect part of the menu: at Nieuw Amsterdam, they use a spice rub, sous vide it for 48 hours, and only then put it on a charcoal pit grill. The amount of time and effort really pays off — and you can see it in the Nola Tasso Pork, too. (This is the one inspired by the Cajun boyfriend.) I’d never heard of the Tasso style of preparing meat, although it was a common part of American cooking since the days of George Washington, and remains a part of Creole cooking in Louisiana. Learning while eating — my kinda dinner.

I’m lucky that I have a ‘dessert stomach’, so that I had just enough room left to try the desserts. The Mexican hot chocolate is a deconstruction of the dish, not liquid, but rather served with dollops of chocolate sauce, and garnished with none other than candied coriander. Finally, my favourite: the NY Cheesecake. Vanilla ice cream paired with house-made honeycomb, over which lashings of Laphroaig-infused whipped cream. Divine. 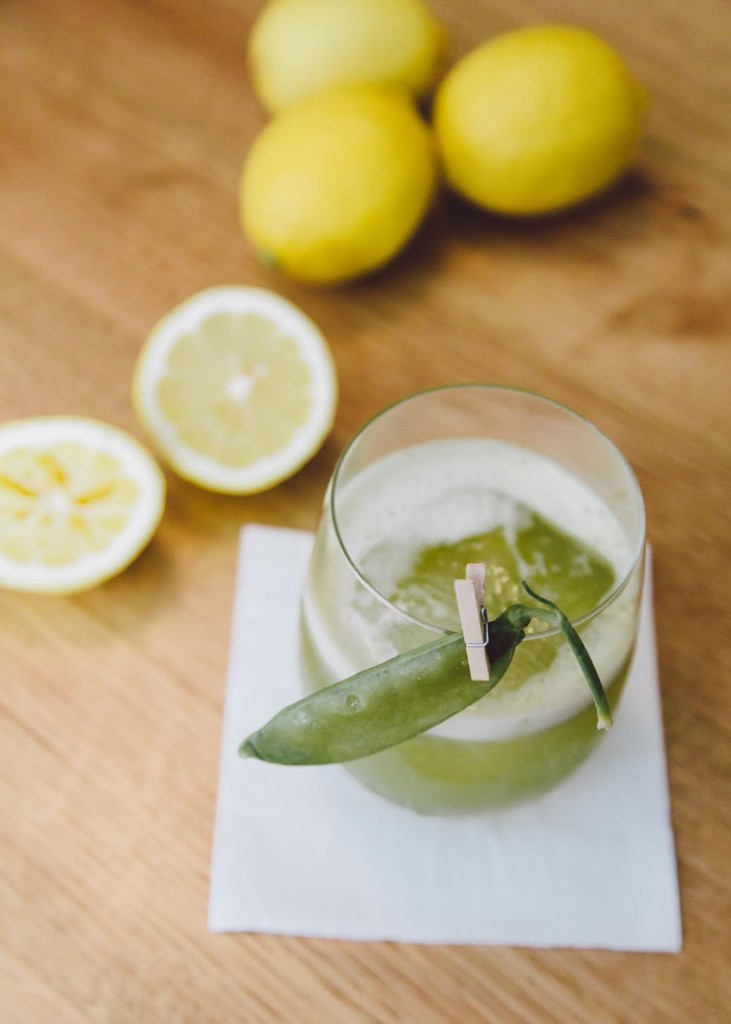 Speaking of whisky, we were served everything from a ‘Peas Go Sour’ (yes, a take on the Peruvian Pisco Sour, except with a fresh snap pea as garnish) to the Absinthe Frappaccino. Not a coffee fan, I asked for an alternative and was given the ‘Blue Carre’. With blue-cheese infused vermouth, it paired perfectly with the brisket’s blue cheese jus. This is the kind of attention to detail at which Nieuw Amsterdam excels.

Head to Nieuw Amsterdam for delicious food you may not have tried. For attention to detail. For all the stories that you won’t find on the menu, but rather from the enthusiastic staff. Their autumn menu sure makes up for summer’s waning days.

-Theresa
Co-founder of The Plus Ones, Theresa loves learning about cultures through their food.

Melbourne International Comedy Festival 2016: The Plus Ones’ Guide

Empathy in Australia – Symposium by The School of Life