Shakespeare under the trees along a beautiful river. There isn’t much better than that. That’s why I want you to run, not walk, to Sly Rat Theatre Co.’s free production of ‘A Midsummer Night’s Dream’ before it’s over. You’ll become as entranced as the cast of characters flitting through an enchanted forest in this, one of Shakepeare’s most endearing plays.

Sly Rat have chosen a most excellent setting: Pipemaker’s Park along the Maribyrnong River. Melbourne’s forgotten waterway, it wends its way through western suburbs until it joins its bigger sister, the grand ol’ Yarra. With the perfect excuse to explore the city, my +1 and I hopped on the 57 tram, just past Ascot Vale to the banks of the Maribyrnong. There we alighted and, with the help of a little Google Mapping, enjoyed a romantic stroll southwards along the wide river. Underneath a huge conifer, was the play. The audience (a mixture of families and folks of all ages) arrayed themselves on picnic blankets under trees. It felt just like we were in the Forest of Arden. 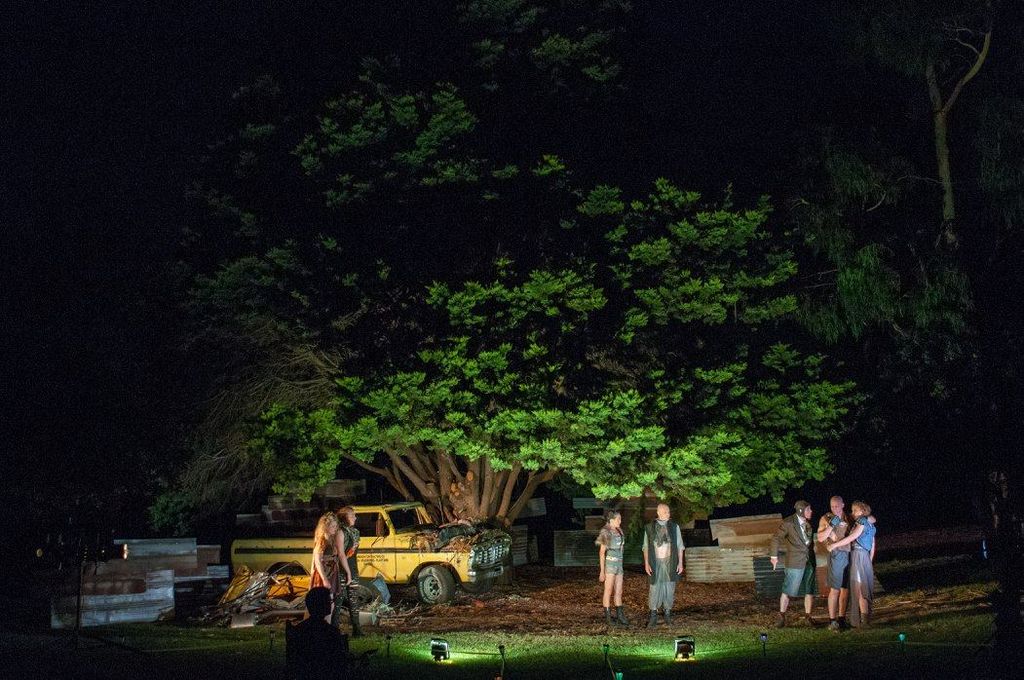 Full disclosure: I was in ‘Midsummer’ in high school. My two whole lines as Philostrate, the page to King Oberon, obviously make me a bit of an expert. So, in a nutshell: There are two sets of kings and queens; one human (Theseus + Hippolyta), one fairy (Oberon + Titania). There’s a play-within-a-play, including a man (Bottom) who turns into an ass. Add in two sets of couples who all fall in love with the wrong person (Helena + Demetrius, and Hermia + Lysander, in this case cutely cast as a lesbian couple). Throughout it all, there’s the mischievous fairy narrator Puck.

Got all that? It doesn’t really matter. Sit back on your blanket and enjoy the ride. It’s all about the costumes, music, and a set that’s fanciful and utterly perfect. I’m not going to give too much away except to say I’ve never thought an old ute could be used in such a delightful way. The casting was fantastic, too, with TPO’s fave comedian Jimmy James Eaton shining as Bottom with a scene-stealing moment late in the play. Brendan Ewing’s Puck was another wonderfully played character, stomping his way around on satyr-like stilts and interacting with the crowd to hilarious effect.

I know you’re Melburnians and don’t care about the weather. So no matter the forecast, get yourself to Pipemaker’s Park. Make sure to budget in enough time for a stroll along Melbourne’s forgotten river before being enchanted by one of Shakespeare’s best comedies. Seeing ‘A Midsummer Night’s Dream’ on an actual midsummer’s night is one experience you simply must do.

-Theresa
Co-founder of The Plus Ones, Theresa was sad to see Philostrate’s one, single major line given to Hippolyta.

Sly Rat Theatre Co.’s ‘A Midsummer Night’s Dream’ runs 19-28 February 2016 at Pipemaker’s Park along the Maribyrnong River. All performances are free and are wheelchair accessible via a lovely stroll along the river.

Disclosure: The Plus Ones were invited guests of KE Weber.
Photo credit: Sly Rat Theatre Co. and Madz Rehorek.

‘Another Other’ by Chamber Made Opera

Virgin Australia Fashion Festival (VAMFF) 2016: The Plus Ones’ Guide