Have you ever been to a concert where you were encouraged, not to dance or sing along, but to ‘think about the nature of sound itself’?

I went to the Melbourne Town Hall for a night of just this kind of concert. Performed by the Australian Art Orchestra (AAO) and Ensemble Offspring (EO) and arranged by respective artistic directors Peter Knight and Claire Edwardes, Exit Ceremonies was an unforgettable night of soundscapes and music without boundaries.

Onstage in the main hall, blue lights bathed the instruments in a cold glow while a red light illuminated the largest organ in the southern hemisphere. 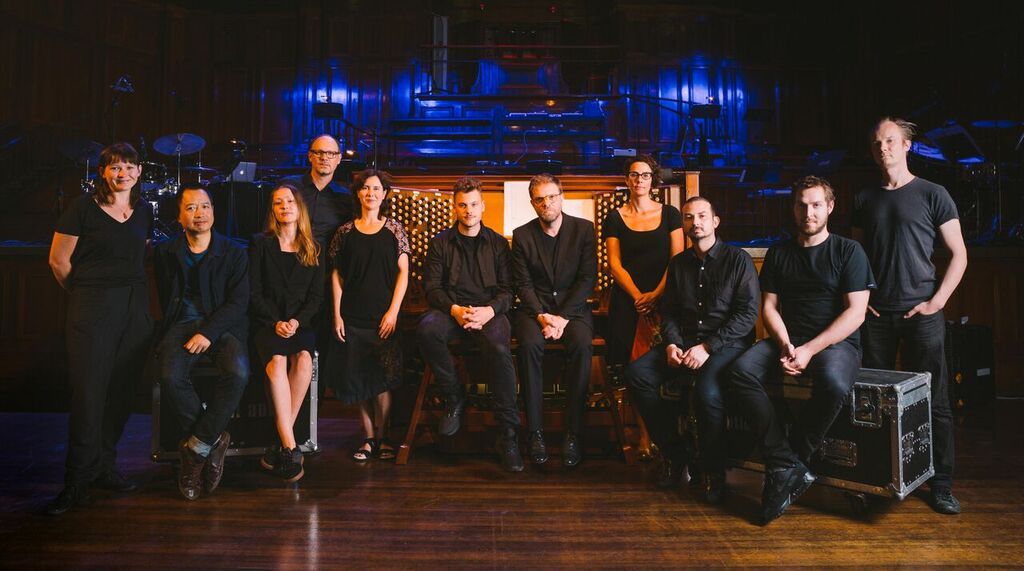 The first piece, written by organist Austin Buckett, confronted us with a series of sharp, staccato blasts, demonstrating the huge organ in full force. Drummer Joe Talia tapped out spidery rhythms amid a screeching undertow from violinists Erkki Veltheim and Anna McMichael. Without a catchy or pleasant melody, it was difficult to enjoy the performance as a traditional piece of music. The appeal was in listening carefully and discovering each individual rhythm and sound.

Composed by Simon James Philips, the second piece created a serene soundscape, more melodic and ambient than the first. Turntablist Martin Ng emitted muffled guitar loops which to me sounded like a conveyor belt in an empty factory, its whips and whirs echoing around the cavernous hall. I closed my eyes during this piece, lulled into a trance.

The third and final piece leaned heavily on the string and wind sections. Originally composed by Alvin Lucier, Peter Knight introduced the piece, describing him as a ‘phenomenological composer’.

There was a certain disconcerting quality to Lucier’s piece—the string and wind instruments played continuous, conflicting notes. Drums were absent as Talia and Edwardes operated disassembled pieces of the organ. It was an exploration in dissonance, in which new sounds and notes would emerge from the discordant score.

I thoroughly enjoyed the challenging and complex compositions of the two Australian orchestras. Leaving the venue I discovered an appreciation for musical experimentation, the kind of music that may not get stuck in your head because it’s busy burrowing deep down into your brain.

-Tom
Tom Bensley is a freelance writer in Melbourne who reviews anything he attends, watches or reads. It’s a compulsion, really. Follow him @TomAliceBensley

The Australian Art Orchestra will be performing with Nicole Lizée at the Metropolis New Music Festival in May.

‘The Winners’ at The Owl and Cat Theatre