If you read my little resume at the end of this article you’ll see that I’m no stranger to a good glass of Scotch. As a born and bred German, beer also ranks highly in my diet. Therefore it’s easy to see why I was delighted to be covering a Boilermaker masterclass put on by the wonderful James Squire Brewery.

What is a Boilermaker? Well as whisky expert Fred Siggins states: Back in the olden days in Scotland whisky wasn’t as refined or rounded as it is today, so the average Scott would often have a cheap beer and a cheap shot of whisky on the ultimate mission to get tipsy. Today, matching a high quality scotch with a craft beer is a fine art that requires a keen palette and a true love of both beverages and their unique flavour profiles.

The event was held in the newly renovated top level of The Crafty Squire – the well-presented pub on Russell Street that serves many inventive James Squire brews straight from the brewery to the tap.  Set on a long table, each guest was greeted by a lineup of six glasses of single malt scotch, a map of Scotland with the sample whisky regions and brief flavour descriptions, as well as a booklet on all available James Squire brews. Tapas-style complementary food like cold cuts, pâté , and chocolate was also provided to match the drinks. Fred Siggins gave a brief description of each whisky and its unique historical and geographical origins and flavour profiles. James Squire general manager Joe Baily then served up freshly tapped beer to complement each scotch and give interesting insights into the brewing process as well as the different types of beer. 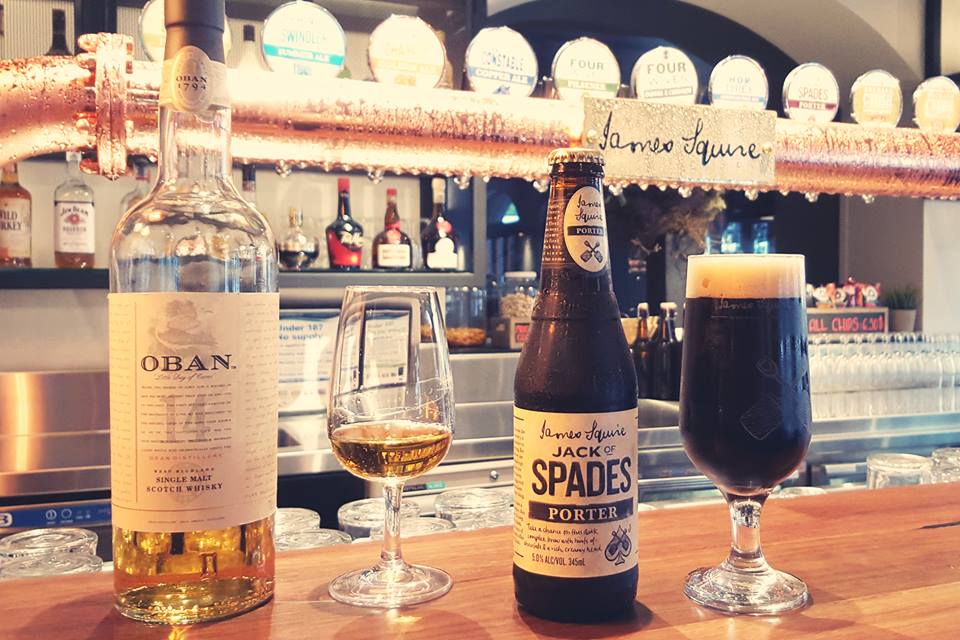 photo via The Crafty Squire

The proposed matches were surprising. Rather than pairing similar flavours, Siggins and Baily convinced us that opposites attract. The most surprising combination was smoky scotch from Islay paired with an apple and pear cider. My favourite combination, however, was a beautiful Talisker whisky combined with a James Squire Jack of Spades Porter. One smoky yet crisp, the other smooth and rounded, together they created a wonderfully complex and lasting flavour. Best enjoyed with a piece of dark chocolate.

You could tell that both gentlemen were hugely passionate about fine liquor. As a bonus Baily gave us a quick tour of the brewery after the tasting was finished. There are plans to host these events regularly going forward so keep an eye on the James Squire website or check The Plus Ones events calendar. If you like top notch craft beer and exceptional scotch, these boilermaker classes are not to be missed!

Disclosure: The Plus Ones were invited guests of James Squire.