Since posters have appeared around Melbourne, I have been eager to see La Verità, intrigued and drawn in by the description of the show as ‘surrealist’ and ‘dream-like’. After a hectic start to the year, this seemed like the place to go, to be enthralled, escape, and somehow to relax.

Arriving at the Arts Centre Melbourne however, there was a different feeling in the air. With a close to full house greeting their companions and making their way inside, the place was buzzing with excitement.  It was a night to dress up, a night to impress — and for many, young and old, it was date night.  Luckily that included me!

The show opened comically with feather-emblazoned cabaret dancers jostling for position, striving to outdo each other for centre stage.  It was a great opener, and the audience was quickly involved and laughing.  This was followed by compères in stripes to ‘formally’ introduce the show.  We had quickly been taken down another path that I had not anticipated – silliness and clowning.  The scene was set with humour, the posters hinted at beauty, the audience was ready and willing, and with performers clearly full of pizzazz — we were off! 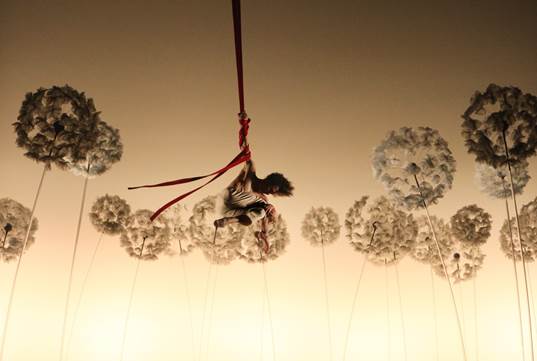 The rest of the night was an amazing stream of talent. Juggling, acrobatics, pole dancing, live music, ballet, singing, roller skating and balance acts night held together with a Spanish, surreal, Dali-esque narrative style.  And the humour — lots of it! Although at times this could have felt a little distracting, I can’t complain.  There was simply a lot to see.  Often there was an astonishing act as the main focus, while off to the side or in the background, quirky clowning shenanigans ensued – be it characters marching in sparkly Napoleon hats (I want one), a rhino playing the piano, or a ballet-led juggling duel surrounded by multiple Salvador Dali masked contortionists.  Sometimes it seemed as though there was too much going on, but in reality, I just wanted to see it all. I needed more eyes to catch everything!

I have seen a few Cirque du Soleil shows before and the creative stamp on La Verità is clear.  La Verità, however, was more intimate, even in the Art Centre’s State Theatre.  Impressively, so multitalented are the cast that there were only 12 performers.  The beautiful sense of timing and the performers working with each other gave sleek motion and guided us through the entire performance while the music sweetly serenaded us. The comedic interjections, though silly, were also carefully crafted, keeping the show light and simply fun.

‘La Verità’ means ‘the truth’, and the truth is that this is a show not to be missed.  It was indeed enthralling, and entertaining, and beautiful — although maybe not as relaxing as I had originally thought. We left energized!

– Duncan
Duncan is a ‘man about town’ and purveyor of Melbourne’s surprising, quirky, and cultural events.

The Plus Ones were invited guest of Arts Centre Melbourne.

Stacks On – The World’s Happiest Festival