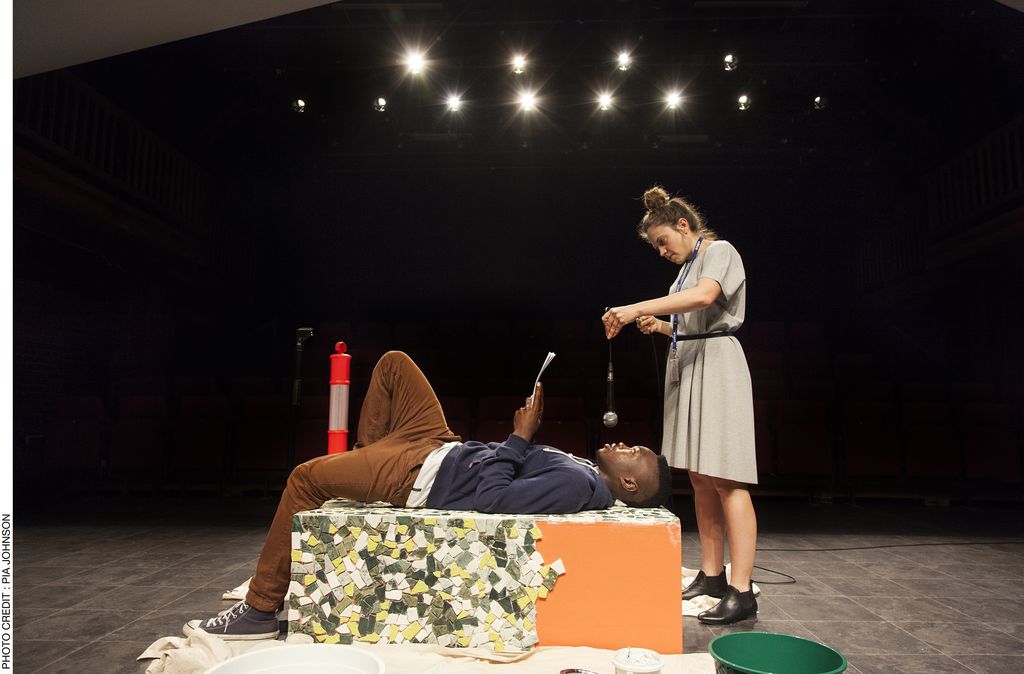 ‘A Social Service‘ premiered at Malthouse Theatre to a full house, and instantly set itself apart from any plays you’re likely to have seen recently. The stadium seating was on opposite sides of the room, with the stage in between — meaning everyone could see a different view, as well as have a good old stare-off with whoever was sitting directly across from you, or, in my case, identify anyone I’d seen on the telly before.

Entering the theatre, we saw a man standing with his face to a wall in the back/side stage of the set. Once seated we saw David Wood’s bust cropped through clever set design, and as he boomed his way through a clever version of ‘The House that Jack Built’, with people characterised as animals in part of a vicious food chain, all orchestrated over by the ominous Jack.

The two other characters are introduced: young man Shaan and the peppy yet stressed out Nicola, who hands Shaan a script he proceeds to read off for the rest of the performance. Originally we were a bit puzzled by this, but it made sense as the plot progressed and the script became even more symbolic. I also learned afterwards that Shaan’s role is shared between five young actors, all residents of Melbourne’s public housing estates.

‘A Social Service’ is gloriously self aware and teases its audience cleverly. It mocks the pretention that so many ‘artists’ are guilty of, and the privilege of middle class Nicola, coming from her Brunswick share home into struggling commission housing, there to inspire the residents by ‘showing them an alternative to the…shit they’re used to’ while criticising existing projects.

The storyline between Nicola and Shaan is the main focus, with David Woods playing an entire supportive cast. King of accents and quick changes, as well as deadpan irony and comedy, he manages to play both the pinnacle of arty consumerist pretention and its antithesis, and everything in between.

As well as the brilliant acting, ‘A Social Service’ is a commentary on something that occurs every day: the fight against gentrification, and privilege at the cost of those who are perceived as having less. It also serves as a reminder that they don’t have nothing.

‘A Social Service’ runs 11-29 August at The Malthouse Theatre.
Buy tickets now. The venue is accessible.

Disclosure: The Plus Ones were invited guests of The Malthouse.