If ever there were a tragedy that delivered some of the best scenes in comedy, Bell Shakespeare’s ‘Hamlet’ would be it. Characters swing from spritely jubilation to sinister deeds, from spurious love-ramblings to savage outbursts.

Director Damien Ryan immediately sets us up with curiosity and suspicion. As we take our seats, a lone guard paces the stage in front of glass doors; behind these doors, an agent sits at a desk listening on a wiretap. The public and private world of Elsinore tells us there’s always someone on the lookout. Something is rotten in the state of Denmark, and Elsinore is all but a safe and private haven for those within its confines.

This production takes the audience on a journey framed within a cold-war political thriller. There’s a sense of time-hopping, as hipster-chic costumes collide with antique furniture and digital projections of plane departures. The cast colours the stage with humorous interpretations and brilliant acting. The exchange between Ophelia and Laertes is particularly amusing and endearing: A sister jovially teases her brother while waving a ribbon of condoms about the stage. Polonius is artfully portrayed as a rambling know-it-all preacher, Gertrude is a deliberately ignorant and cheery 1950s house wife, Claudius is a philosophically owlish and charming imposter, and all are fooling themselves and everyone around them – but one. 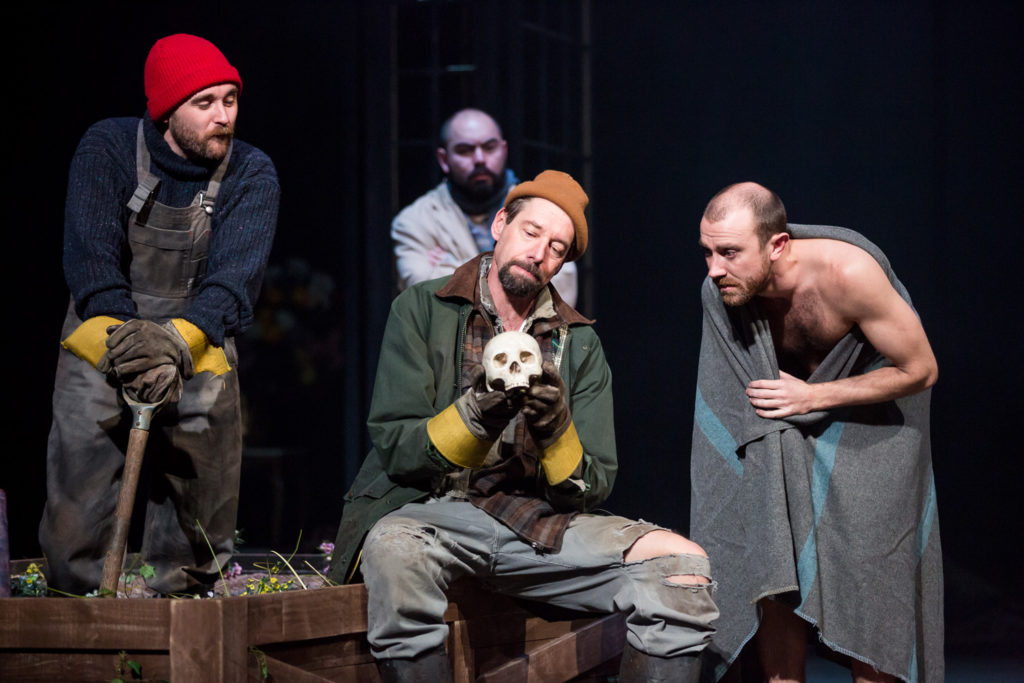 Hamlet (Josh McConville) is barely noticeable when he first takes the stage. He is brooding and blended into the black background, a sulking underdeveloped man-boy who despises his family circumstances. McConville’s performance is deeply engaging and animated. Hanging from the walls, he primitively swings his bare bottom in a display of madness and anger, seizing our attention and captivating us with insane hilarity. He screams and wails on stage, and scene-by-scene slowly trespasses his way into our spectator space. He’s not a Hamlet who soliloquises to himself. He refuses to be ignored.

For a play that features only two female characters, almost half the cast of this production is made up of women. Gender boundaries are convincingly crossed, and with actors who play multiple roles there are scenes where women dominate the stage. The acting is so superbly executed it’s hardly noticeable who is playing whom. It isn’t until the end that we realise that this is a ten-person performance.

Whether you’re Shakespeare-shy or a veteran admirer, this production will leave you buzzing in your seat. To be or not to be is not the question. The question is: when are you booking your ticket?

-Hannah
Hannah is a high school English teacher and Shakespeare enthusiast. Hamlet was, and still is, her favourite tragedy of all time.

Hamlet runs from the 14th to the 25th of July at Arts Centre Melbourne.
Book your tickets now before it’s too late.

Disclosure: The Plus Ones were invited guests of Bell Shakespeare.