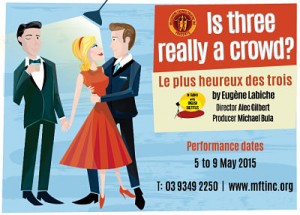 ‘Is Three Really a Crowd’ is the 87th production for the Melbourne French Theatre (Théâtre Français de Melbourne) in a history that goes back 38 years. Founded in 1977 by Michael Bula and A. David Gorrie. MFT’s latest offering was performed last week in the Open Theatre at the University of Melbourne, the very theatre where it started.

Melbourne French Theatre relies on volunteers. All the actors and backstage crews have day jobs, which makes their commitment to such a production commendable. Having entertained more than a thousand Francophile and Francophones over the course of their eight-show season, they should feel proud of their achievements.

With two plays a year and a school incursion workshop, MFT is always grateful for people’s support, either as actors, behind the scenes, audience, or sponsors. Find out more at www.mftinc.org.

‘Working: The Musical’ at Chapel Off Chapel