On a sunlit Sunday morning two PlusOnes cycled from Brunswick to Williamstown where its first Wine & Cheese Festival was held on October 12th. It is true that Melbourne cherishes its European roots and this festival underscored that given once more: Italian wine, Greek wine, French wine, French cheese, Dutch cheese, blue cheese, bland cheese, smelly cheese, cheesy snacks, bratwurst, all kinds of chocolate, more cheese and even more wine. Most of these cuisines are direct descendants from centuries of Old Continent trying and testing and almost all of them are produced Down Under.

Long lines (the team has learned from this!) of the uninitiated snaked along the Aussie exhibitions of EuroFood™. To the greatest of my relief, the Oma and Opa merchants were able to confirm that Gouda Cheese is pronounced not as goo-dah, but g-auw-daa. My request to the reader is to imagine the ‘g’ as the sound you make when clearing your throat just as you are about to spit out an obnoxious piece of something that got stuck. Please try it: ggg..auw.. da. Gouda. So yeah, cheese galore at the cheese & wine fair. True cheese heads as PlusOne Felix and yours truly are, we felt like kids in a candy store (albeit a smelly one). Amazingly, the stuff tasted and smelled like the real thing. Australian agrarians have done a great job at taking age-old recipes and adding new twists, mixing it up and creating new styles. 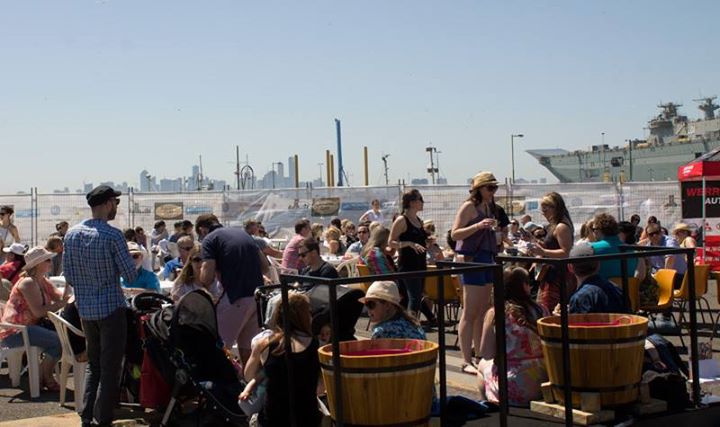 One good example is wine. During the twenty-something ‘sample tastings’ we endured, we learned quite a few things about the local produce. It appears that Shiraz is the dominant vine used in most of Victoria. Apart from the vine, the differences in wine taste are found in age, fermentation, acidity of the soil and number of sun hours. And so we tried stubborn reds, sweet whites, elegant bubbles, slutty sparkles, Yarra crisps, flabby Ballarines, Sauvignons, Cabernets and many many more. The wine knowledge exhibited by the stallholders -mostly French backpackers on a working holiday visa-  was truly impressive. The PlusOnes raised their eyebrows, stuck up their glass-holding pinkies and assumed very serious connoisseur poses, all the while masking their glaring ignorance of the grape. But as long as she kept talking, we listened; she poured, we asked; she explained and we drank some more, and then she poured some more; and all this under a cloudless sky and in a meek breeze overlooking arguably the beautifullest view of the city skyline.The organizers have set up an event that will serve as a standard for the years to come. The wine & cheese fest underscores once more that the people of Melbourne take the good life seriously and are willing to pay good money to try and taste all things from a world away. This realization, which dawned on me during a liquor-induced triple handstand on the grass, was later again confirmed at a Latin street festival, one of the many many goings-on around town. ¡Viva la buena vida!

Disclosure: The Plus Ones attended courtesy of the event organisers.