The Melbourne Fringe Festival is set to shake the city from its winter doldrums from 17 September–5 October. Similar to previous years, the North Melbourne Town Hall will be transformed into a psychedelic Festival Hub. Over the three weeks of the Festival (now in its 34th year), the Hub showcases 60 shows across 10 venues, hosts 12 club nights, and flings open the doors to three bars. 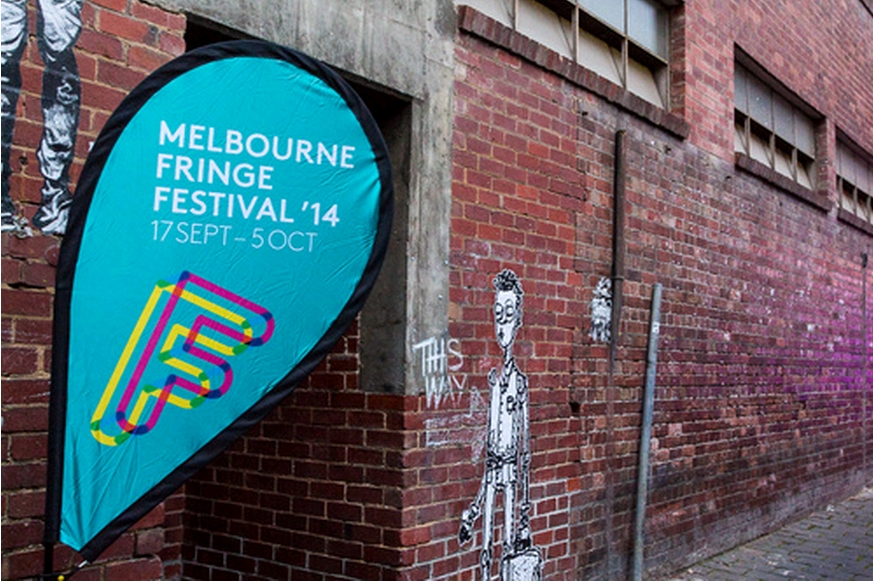 Outside of the Hub there are some more unusual takes on the city:

The purpose of Fringe is to help emerging artists present/promote their work in a community-based environment. I felt that my first few attempts at Fringe were hit and miss (as they probably should have been, it is Fringe after all!). But then I learned. It’s best to choose an event or two from each category.

The Festival this year is split between Performance, Comedy, Cabaret, Visual Arts, Live Art, Music, Circus and Dance. I love the scale of this program, but even for me so many categories, so many shows within those categories, and so many amazing artists within those shows is a touch overwhelming…

Not to worry. As we have done for other marquee events such as White Night, Open House Melbourne, and Nite Art, we’ve put together a guide to navigate the labyrinth that is Fringe.

I went through the program with a fine tooth comb and picked one, yep just one, stand-out show under each category. Believe you me, it wasn’t easy. I think each one embodies the spirit of Fringe and meets The Plus Ones’ cut for uniqueness.

The Plus Ones’ Top Fringe Picks:

Cabaret – Gillian Cosgriff Is Whelmed. I saw her show last year, she is very versatile and disturbingly talented.
Circus – Die Roten Punkte – Eurosmash. I make sure to see these guys every year. They are absolute entertainers!
Comedy – Arena Spectacular. Only two tickets per show…we do like exclusive in Melbourne.
Dance – TwoPoint. The show takes you from the fun and inclusion of childhood games to the distance of adulthood.
Live Art – Cake Bombing. They’ll turn up to your dinner party with baked goods and songs in tow (Theresa and I have already booked them for a party with some friends!).
Music – Space Orchestra Play To Bugs Bunny Cartoons. Never judge an event by its name I say…but how can I not!
Performance – Screws, Nuts & Bolts. Coping mechanisms expressed through vaudeville, burlesque and vignettes.
Visual Arts – Street Art On The Spot. See street artists create their work along Sydney road.

Plus: Opening Night. Theresa and I are opening night husseys. We love them. They encapsulate the best of a festival and project reams of energy which often sets the tone for the weeks to come.  Make sure you make it to this one, it’s going to be a par-tay!

You can try to valiantly random the Fest, as I did many dates ago. But remember if you do: shows with the title ‘Lesbian Seagulls’ are probably not appropriate for dates that are strict Catholics.

We are massive supporters of the Melbourne Fringe Festival and no doubt  there will be many more outstanding pieces that people unearth. If you go to any and want to share your thoughts with The Plus Ones community we’d love to hear from you on Facebook, Twitter, or Instagram.

The Lumberyard Restaurant opens in The Workers Club