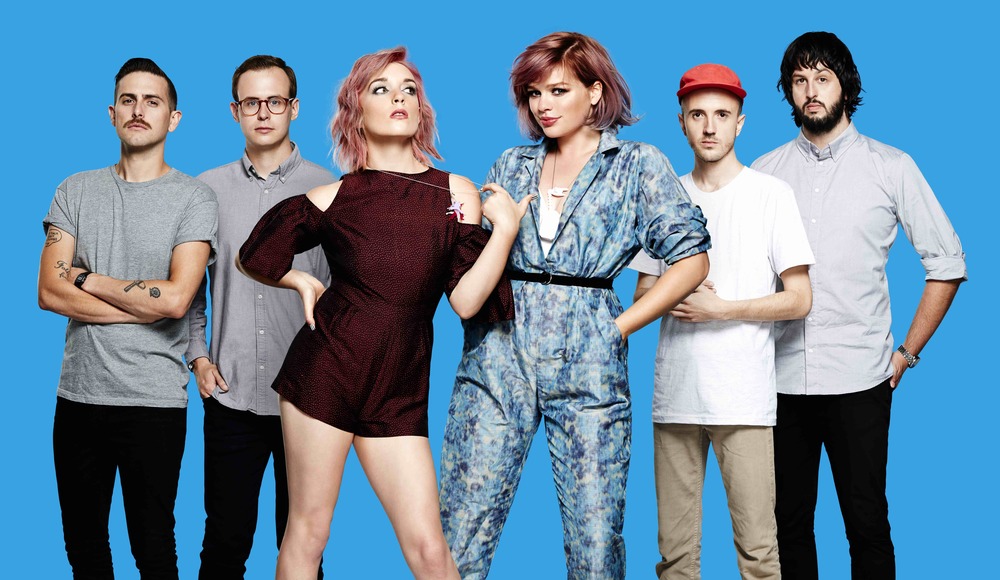 Alpine’s sound is difficult to describe. It’s like a highly-charged throwback to glam rock, a healthy mix of indie and some hard rocking numbers — especially on their second offering, 2015 album Yuck. I was determined to see them pull it off on Thursday night when they played a sold-out show live at The Corner Hotel.

My friend and I tried our best to weave to the front before Alpine started, but the dense crowd stopped us from getting too far without accidentally elbowing a few necks. There was a bright flash of lights and the band walked out, followed by singers Phoebe Baker and Lou James in glam-rock goddess attire and dyed hair.

They opened the set with ‘Need Not Be’. It was a perfect intro to the evening, showcasing Lou James’s sexy voice and Baker’s complementary harmonies, before the big finish to the song that had the band in top form, the audience captivated, and me absolutely delighted. Alpine’s music has a sensuality and a warmth to it that makes you want to curl up inside their musical blanket and cuddle the good vibes.

What followed was a joyful and energetic set from a group of Melburnians overjoyed to play in their hometown. They played the biggest hits from 2012 debut ‘A is for Alpine’, asking us to help out the lyrics they’d forgotten. Tracks like ‘Villages’ and ‘Gasoline’ garnered the biggest cheers, but every song was performed with such dedication to the performance, they were never just phoning it in for the crowd. ‘Foolish’, recently performed for Triple J’s Like a Version, sent a wave through the crowd that got everyone dancing, while low-key groovy tune ‘Jellyfish’ was a real highlight for its contrast.

Occasionally bassist Brian Lamb, bursting out of his skinny jeans with excitement, would rush to the front of the stage to start a clap, but it was mostly Phoebe and Lou with their peculiar dance moves, conversational banter, and on-stage roughhousing that provided the visual entertainment.

I laughed plenty of times throughout, as Lou would dump a bottle of water on Phoebe’s head (after which she flicked her hair up and down heavy-metal style) or when Lou bantered about eating bananas, following whatever conversational fancy came into her head.

The band returned for an encore and finished the set with “Damn Baby”, one of the most fun and explosive tracks on the album. Tim Royall’s keys hammered out the explosive riff, perfectly amplified by Phil Tucker’s drums. The vocal refrain “Damn Baby!” had us all shouting along with them.

A magnificent set from Alpine on a Thursday night at the Corner Hotel. It left me excited for their next album and all their future shows.

Purchase Alpine‘s new album ‘Yuck’ on iTunes or at JB Hi-Fi on CD or deluxe vinyl.

Disclosure: The Plus Ones were invited guests of Winterman and Goldstein.

‘Tender’ at The Butterfly Club