Glam 1920s frocks with feathered headpieces, a whole lot of sequins and antique guns. Sounds like your idea of a good time? You’re in luck. Miss Fisher’s Murder Mysteries Costume Exhibition opened on 1 May and it’s every bit of class and old school charm you’d imagine. 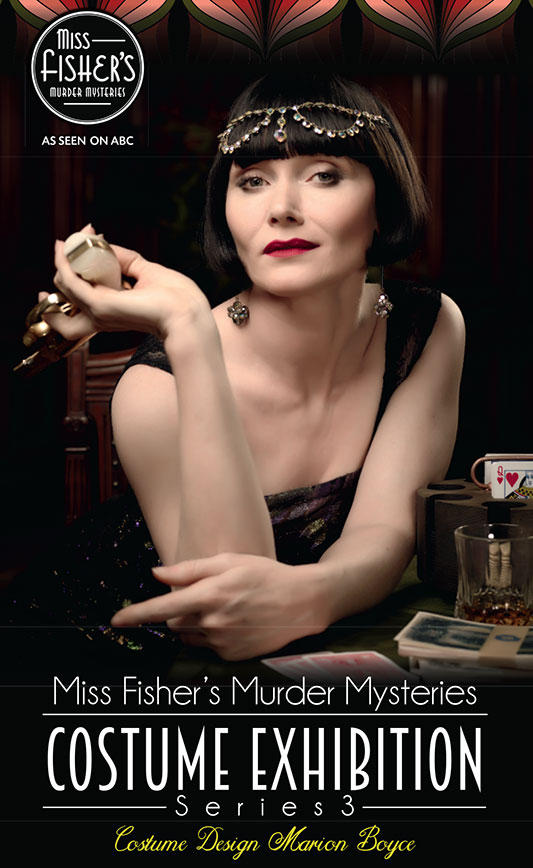 In case you haven’t seen the show (if you haven’t, you’re missing out), it’s about a gorgeous female detective, Phryne Fisher, solving crimes in 1920s Melbourne. The ABC TV program is based on a series of novels with the same name.

The exhibition houses all the best outfits from the third season, which premieres on May 8th. On display are props sourced from around the globe and intricately hand made garments, including ball gowns, tennis outfits and mermaid inspired swimmers. The immaculately well-dressed mannequins adorn never-before-seen costumes by award-winning designer Marion Boyce.

Samples of fabric from many of the outfits are provided for you to touch, feel, and get lost in world of pattern and texture. Go behind the scenes to discover the inspiration for the costumes and understand how they’re made. Try on the outfits or be a detective yourself by solving a crime using clues from Detective Inspector Jack Johnson.

The exhibition is fittingly displayed at Rippon Lea House & Gardens, one of Melbourne’s oldest mansions. The location alone is enough to convince you to make the trip to Rippon Lea. Immaculately well kept gardens, beautiful buildings, and breathtaking chandeliers will make you wish you were back in 1922. Many scenes were filmed in the house itself, as it’s the home of Aunt Prudence in the TV series.

Whether you’re a dedicated fan of the show or simply a lover of good taste, you’ll swoon over every inch of the exhibition. Wear your best flapper outfit and take a martini for good measure.

Disclosure: The Plus Ones were invited guests of the National Trust.