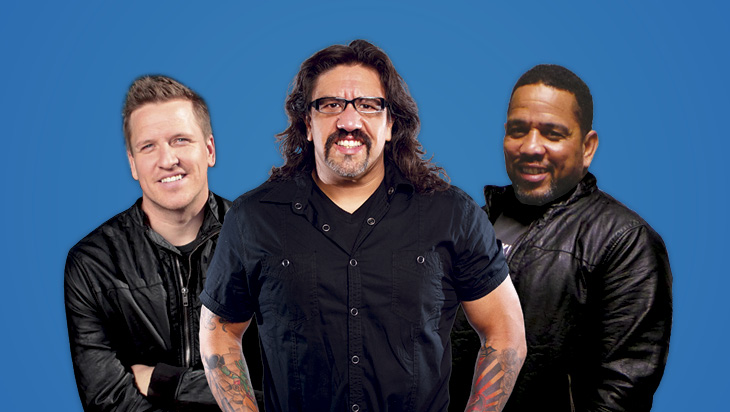 photo via Stand Up Revolution

Stand-up Revolution sold out Rod Laver Arena when they last toured Melbourne! These guys are entertainers of the highest order and know how to work a crowd. Usually they spend their time on the Comedy Channel playing to audiences in the U.S., but I’m glad they have made another trip Down Under. There were lines in this show that need to be seen live — they can’t be re-told by amateurs (like me). The impact wouldn’t even be close.

On this tour of Australia the team consists of:

Lance Patrick – the MC for our show. He made sure we were in the right mood for each act.

Hooter Moreno – he is Martin’s son, and while still learning his trade he can get in a few power laughs.

G Reilly – is an absolute old school pro. His act reminded me of the glory days of stand-up with Richard Pryor and Eddie Murphy (pre-Disney), moving packed audiences to tears. He doesn’t hold back during this show and lives up to his reputation as a winner of the prestigious ‘racist gift bag’ trophy. I’d love to check out an hour of his comedy sometime.

Martin Moreno – the headliner for the night. Martin has been around the comedy circuit for a long time and has a story or two to tell. A lot of his performance is about how life changes as you move through the decades. There’s no doubt in my mind he’s still having a good time.

Next time these guys make it out to Australia I’d highly recommend you see them.

Comedians of Stand-Up Revolution performed 19 April at the Comic’s Lounge.

Disclosure: The Plus Ones attended Stand-up Revolution courtesy of Dianna O’Neil Publicity.

Chilli Fest at the Immigration Museum