Jazz Twemlow is an eloquent comedy powerhouse. His ‘current affair’ content experience (The Roast, ABC) shows through in his Comedy Fest show The Disgruntalist, with his knowledge of all things current turning into a rapid-fire stream of consciousness with punch lines threaded in between.

I’m quite conflicted right now: in his opening, Jazz discussed the link between his shows receiving good reviews and the subsequent drop off in audience numbers. If good reviews make you not want to go to shows, then it was really bad. Horrid. Stop reading now.

But actually, it was really good, and you should go and see it. 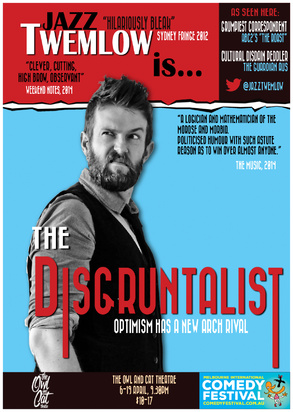 The Disgruntalist didn’t seem to have a formula going on: the majority of the 90-minute show dodged from politics to social equality to dismay at the future of the human race and our zombie twitter feeds. A lot of sentences were finished with the frustrated exclamation of ‘Fucking WHAT?!’ which, to be honest, is what is uttered in my head a lot of the time (largely when politicians open their mouths).

The Disgruntalist is also highly educational: tips for avoiding Chuggers (charity muggers, those damned kids with clipboards and photos of starving children), a lot of reasons why binge drinking is a crappy form of time travel, but best of all, a flawless David Attenborough impersonation that had the audience in stitches.

Jazz Twemlow is certainly disgruntled, but for good reasons. He’s started my brain along tracks it had never wandered before (humans really are crap at being human!). Now I’m morphing into a disgruntalist too. And enjoying it.

The Disgruntalist runs 6-19 April at the The Owl and the Pussycat.
The venue is not accessible.

Disclosure: The Plus Ones were invited guests of Jazz Twemlow.