It’s no secret that the Thornbury/Fairfield/Preston area is becoming more like Fitzroy/Northcote/Brunswick – in terms of its access to amazing cafes, bars, and restaurants. CH James is further evidence that this is occurring.

The Plus Ones were lucky enough to attend a brunch event there with two scions of the Melbourne food scene, Brunch Addicts and The World Loves Melbourne. We were due to arrive in Fairfield at 10am and I thought that a 9:30am pick-up from Fitzroy would leave plenty of time for me and Theresa to drive there. I pulled up to Theresa’s house and called…a fairly croaky voice answered. Now?! I thought it was at 11am! Sigh…so here’s me thinking it’s going to be another 20 minutes before we leave and casually checking my email in the car, when five minutes later Theresa jumps in. I was mildly impressed. We got to Fairfield with five minutes to spare. It’s actually not far at all. 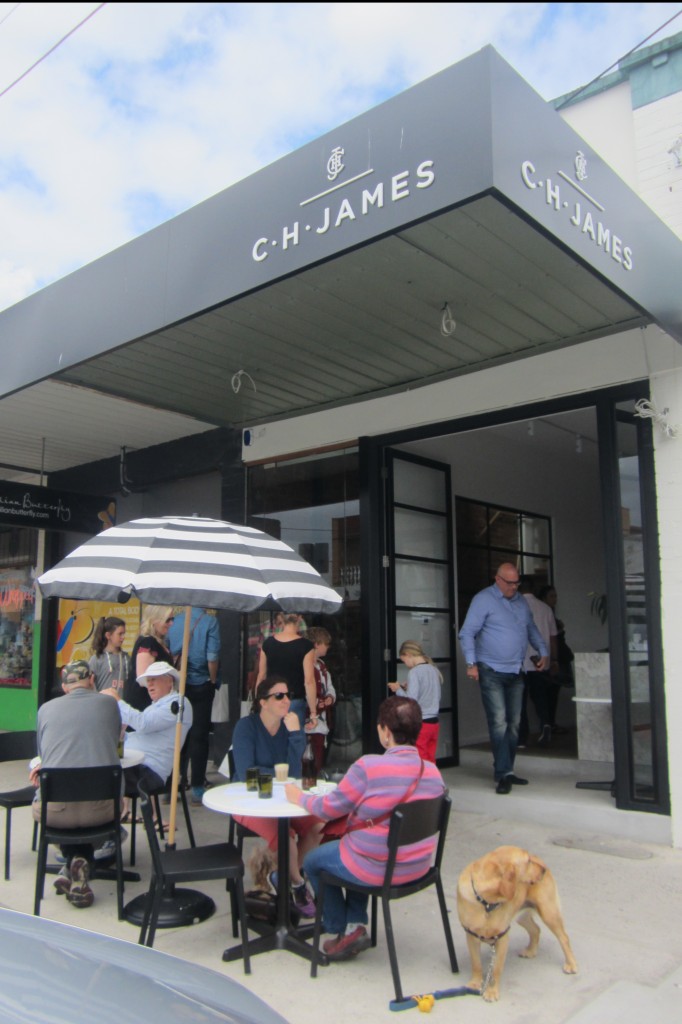 Fairfield: This was Charles Henry James‘ home and is the iconic location for Theo Krambias’ ode to the man. Mr James was somewhat of a Melbourne socialite, spruiking the potential and vision for the northern suburbs during Melbourne’s halcyon gold rush years. Now some 150 years later, I think his vision is coming to pass.

There were a number of things that stood out at CH James from the start. Light, breezy and community feel. Being an ex-Brunswick East fella, the vibe of the place reminded me a lot of Pope Joan, which is a pretty favourable comparison.

Style, substance and community: these three things embodied C.H. James the man. Theo has aimed to bring all three to his cafe.

The outside garden area next to the local Anglican church

Sabrina and Scott of Brunch Addict; David of The World Loves Melbourne and his family; and Ruki and Theresa from TPO

The menu options were broad and all looked scrumptious. I, of course, had to go with the ‘Only If You’re Hungry’ option. There’s something about thick cut bacon that always gets me. I loved the relish on this dish as well and the sourdough was something else.

The other thing that stood out to me were the prices, not in the usual fashion where I am flabbergasted. But in the good way. There at least half a dozen fairly substantial dishes on the brunch menu that are $10.  Value for money in all its respects is well-respected at The Plus Ones.

Disclosure: The Plus Ones were invited guests of CH James Cafe.