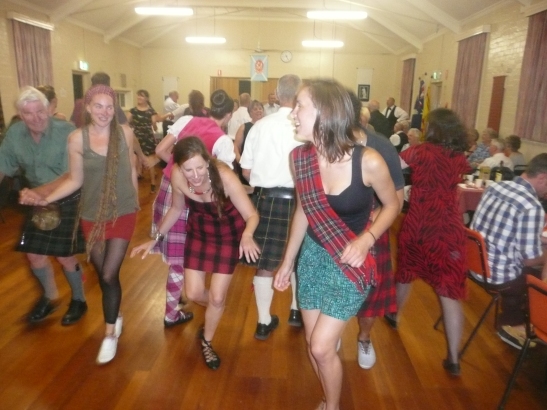 Ceilidh dancing at Burns Night (Theresa’s in the tartan dress)

Burns Suppers/Nights have held around the world since 1802, commemorating the life and times of Robert Burns, Scotland’s national poet (1759-96). He’s responsible for quite a few things you might be familiar with — “Auld Lang Syne”; the poem with the line “My love is like a red, red rose/that’s newly sprung in June”; and Steinbeck named his novel, Of Mice and Men, from a line of Burns’s poetry. His life was legendary: a farmer, a writer, a carouser, he fathered a dozen children by four women.

Burns Night is held around the world on the anniversary of his birth, on 25 January, but in Australia is would be too bloody hot. So February it is.

I’ve been going the past three years (and Ruki came along the first time) to the Brunswick Scottish Society’s Burns Night in Melbourne. I’ve also gone with friends to Burns Nights in Chicago, London, and Wellington. What can I say? They’re that much fun!

Bagpiper and Highland dancer – how Scottish!

At $30, this is the best bargain in town. My friends and I got a sherry cocktail hour, Highland dancing, bagpipes, the chance to learn some Scottish ceilidh [kay-lee] dances, haggis and tatties to start, followed by a huge catered dinner, all rounded off by dessert. And it’s all BYO, so you can bring as much whisky as you want.

Burns Nights always follow a traditional running order: someone pipes in the haggis, then there’s the recitation of “Ode to a Haggis” (no, really, it’s a Burns poem). There’s the tongue-in-cheek Toast to the Lassies, followed by the response; and various poems. The Brunswick Scottish Society members tend towards the elderly (their oldest member, 101 years old, was in attendance), but they absolutely love having a crowd of young folks come along. Which is really nice of them, because we always end up butchering the traditional dancing.

If you feel like donning some plaid and learning the steps to “Strip the Willow”, don’t wait until next year. Like the Brunswick Scottish Society on Facebook, and get along to one of their monthly ceilidh dances (which are BYO and cost a whopping $3). You’ll have to wait until next year for Burns Night in Melbourne, though.