The Monkey Barrel is a comedy gig venue nestled nicely alongside Hunter Square just off the Royal Mile and convenient for the lively Cowgate experience which tends to cater for a younger energetic crowd.  This probably explains the audience make up on my visit tonight for the PROJECT X event with a broad cross section of students alongside, more, mature elements of the City, tourists looking to wrap up a long day sightseeing with a drink and a laugh to send them back to their hotel room happy.

Considering this was a Tuesday night, and the venue was well populated, I can imagine the weekend events here being raucous.  What I liked about the venue layout was you didn’t feel packed too closely into the room, and the bar was accessible and well stocked with a good variety of beers and some nibbles too. 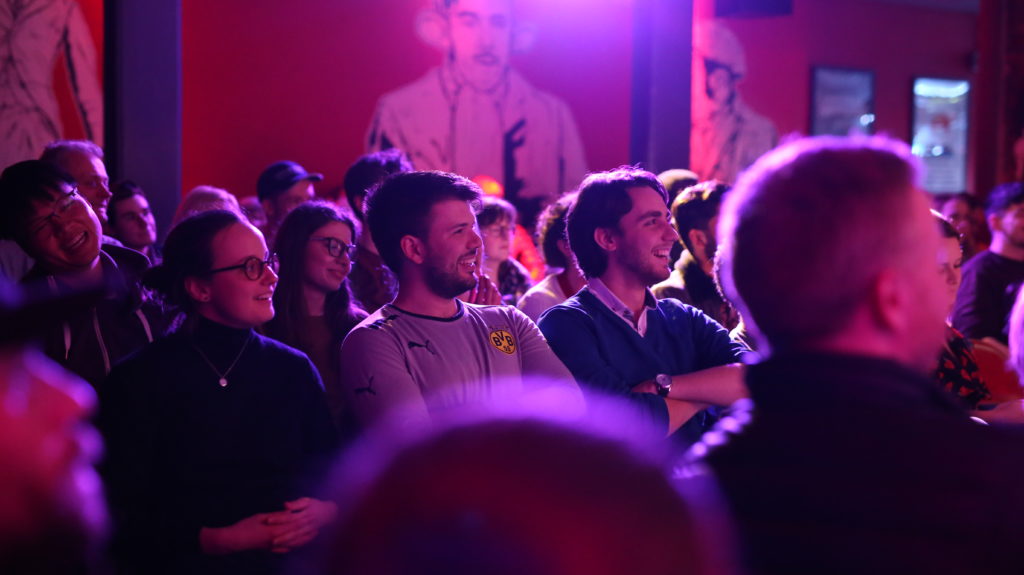 Nicely settled with a couple of beers inside me tonight’s compares, Iain Campbell and Martin Bearne arrived onstage to set the scene and interact with the audience.  Iain explains that Project X is all about local comedians having a chance to experiment and try out new material, which means in a few cases it’s going to be rough and ready but it’s a comfortable environment to help new comedy grow which, considering the worlds largest comedy festival is only four months away, is a fantastic opportunity in the City.

There was certainly plenty of optimism that some previously nationally unknown talent could make a name for themselves showcasing and growing material here.  Its always nice to see a comedian attempt something a little different, and first act Michael Welch’s entertaining use of audio/visual was novel and certainly should provide him with a base to grow the comedy we saw this evening.  Chris Iskander has great ability, musically very gifted, he performed comedy songs on a keyboard which were extremely amusing and hopefully will be showcased to a larger audience. Two other acts caught the eye with Yvonne Carroll and her dark deadpan delivery and a zany slapstick routine from Phil O’Shea and James Mackintosh.

In addition two accomplished performers on the comedy scene, Ben Verth and Matt Watson, were encouraged to wear a rather gaudy jacket which had pieces of paper stuck in the pockets with comments written on them from the audience.  The two had to pull random pieces and riff for two minutes, showcasing their ad lobbing skills.

A fun night out and a chance to discover some future comedy gold, but the Monkey Barrel I’m predicting is a great night out whatever the evening.